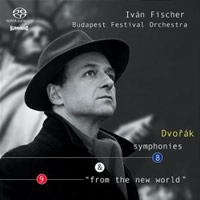 In anticipation of the imminent re-release of this recording on Channel Classics, I gave this a relisten after not hearing it for several years. It is as wonderful as I remembered it - vibrant, idiomatic and romantic performances in splendid SACD sound. The Budapest players respond to Fischer's baton in a most sympathetic way. The playing is filled with nice touches from the string portamentos to the finely honed wind and brass dynamics. It should be noted that the violins are divided on the sound stage - firsts on the left and seconds on the right and the cellos and double basses are located just left of center and to the rear. This arrangement best brings out Dvorak's contrapuntal writing for the strings however it also tends to create a "wall of violins" (Phil Spector anyone?) when both sections are playing tutti. The brass sound is powerful and exciting. The low end foundation of the orchestra is a tad weak sounding (check out the opening of the Scherzo movement in Sym No.9 - the tymps lack the distinctiveness and bottom end fullness one would hear in concert. There is an appropriate amount of hall sound present in the stereo SACD tracks.

I will be curious to know how Channel's remastering may change (improve?) the sound. As I am satisfied with this one (although I can imagine it sounding better as per my notes above) I will probably leave it up to others to listen and compare. Recommended.

I have avoided reviewing this disc, but I have also wanted to express my opinions on it for quite some time. I did want to give it a fair chance, since many seem to regard it as a recording that could well be the new benchmark.

Ivan Fischer is obviously a sensitive and intelligent conductor, but after repeated listenings to this recording, I still find something nags me about this disc. As a matter of fact, I have had a difficult time putting my finger on it. As far as performances go, I find this disc uneven and much of the playing seems routine. There seems to be some rather tepid playing throughout and Fischer only catches some of the nuances of these works.

The Ninth has an uneventful first movement and even more uneventful Largo which just lags. Things pick up a little more in the third. The Finale does have more spark than the rest of this symphony and stands out as a result. The Eighth begins with a definite improvement, the sound having a little more body and focus and it is played better than the Ninth, with more sparkle and passion.

I wish I could say more about the sound of this disc. I think there is perhaps too much depth and a lack of focus. Winds aren't very colorful or rich and strings lack body. Bass is fine I'd say and the brass do come through quite nicely. The tympani are unimpressive.

An important point I'd like to make is that one of the big problems in this disc is that the details sometimes go missing. Winds just don't seem to come through very clearly and lack focus and detail. Pizzicato strings also seem to be missing in action.

This is a disc that initially illicited a very favourable response from others here and perhaps I expected too much. But I have had the disc for almost a year and my opinion of it has improved only somewhat. Don't get me wrong. This is certainly not the worst performance of these works you are likely to hear. The Budapest Orchestra is a very capable body, but the sound and uneven performances take away from what could have been a much better outing. 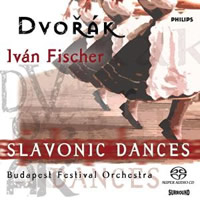