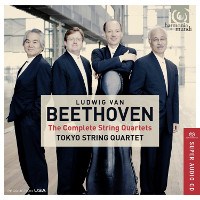 
For over forty years, the world-famous Tokyo String Quartet (1969-2013) was at the forefront of chamber music-making and set the standard for small-ensemble performance. With some forty landmark recordings to their name, the quartet's discography culminated in this now legendary final cycle of the complete Beethoven string quartets. This elegantly packaged set of Super Audio CDs is offered at a special low price.

Over the years, I’ve had an admiration for the Tokyo String Quartet that never quite extended to love. I’ve listened to their recordings (through various iterations of first violinists and cellists) and have consistently found them to lack some degree of fire and excitement when called for by the music. The main descriptors for their performances were musical, thoughtful and laid-back. As a result, their Bartok (for example) misses some important elements of aggression, angularity and excitement in their RCA recording (I am not familiar with their earlier DG recording). In recent years, I've just avoided their recordings. That is, until this Beethoven set came along at a ridiculously low price for eight SACD’s. So, despite my past experience, I bought this set. I’m glad I did.

This recording represents the ensemble in their “final” line-up before hanging up their bows for good in 2013. One thing that most surprised me about this set in general was the urgency and excitement of much of the playing. For example, in the Op.18 set of six quartets, they manage a superb blend of classicism combined with a foretaste of the romantic spirit that was to take bloom in LvB’s music in the next few years of composition. In Op.18/6, the first movement is indeed con brio with much elan and energy almost to the point that it feels like a finale when the last ensemble chords ring out. This is followed by a lovely Adagio that flirts with the minor key creating a nice sturm und drang tension. The third movement scherzo is scampering and alive with astounding group ensemble and blend. Here, first violinist Martin Beaver really shows his mettle as a quartet leading voice. The closing movement opening Adagio has appropriate weight and reminds me of some of the minor key introductions that Haydn employed so effectively. Then follows the happy Allegretto – clouds parted, sun out. These same qualities are apparent throughout the Op.18 set. Really, I have no criticism of this playing – it is quite splendid.

Onto the Razumovsky’s. As much as the Op.18 set is a delight, it wasn't until the next set of three quartets written 6 years later that Beethoven’s unique and inimitable voice began to break forth in waves of sonic splendor. Here, the Tokyo Quartet continues to do complete justice to the music. The performances are dynamic and exciting – something I hadn't expected from this group. I find them to be on par with the Takacs Quartet, my current benchmark for these quartets, along with the Vermeer Quartet (a personal favorite in this repertoire) and superior to the Talich and Emerson accounts (the Emerson’s leave me cold despite the superb execution). The dynamic palette of the Op.59 quartets is much broader than that of the Op.18. There are times in this music where the Tokyo border on frenzy but never over step the boundary into chaos. Their collective skill at managing the measure to measure dynamics is quite extraordinary. If I were to cite one criticism, it would be that the cello playing (so important in the Op.59 set) is just a bit reticent. In these works, the cellist needs to be quite assertive and that bit is missing here. Overall however, wonderful stuff – very satisfying!

With quartets Nos. 10 and 11, we have the bridge to the sublime late quartets. Written one year apart, in 1809 and 1810, respectively, Beethoven’s quartet writing takes on a more concentrated style, especially in the later Op.95 in F minor. Despite its poco adagio opening section, the Quartet No.10 in E-flat is a generally sunny work and the Tokyo makes the most of this aspect in their recording. This quartet was nicknamed “the harp” because of the string pizzicatos that punctuate the first movement. They are played with the requisite precision. The more compact “serioso” quartet in F minor is performed with the appropriate weight for the minor key along with expert ensemble. Two excellent performances that can stand alongside the best.

The late quartets, Nos. 12-16, stand at the pinnacle of string quartet writing, especially the central three (13-15). I remember first encountering Nos. 13 and 15 in performances by the Fitzwilliam Quartet over 25 years ago and how perplexed I was by this music. Though I didn't understand it at the time, there was something that kept drawing me back to it. Great music has a way of doing that and this is GREAT music. The performances by the Tokyo are wonderful. I can say that they are able to stand with my personal favorite in this repertoire, the Takacs String Quartet, and hold their heads high. The Tokyo has the advantage of superior sound which adds to their cause. Note that Quartet No.13 is accommodated by itself of disc 7 of the set and that the Grosse Fuge movement is in its original place as the finale of this work. It is followed by the Cavatina movement that LvB composed as a replacement finale when players and listeners deemed the fuge too funky. Here is a good a place as any to mention that this set could have been accommodated on a total of 7 discs (instead of 8) without splitting any work across discs by a bit of rearranging the works on the discs. As it stands, the quartets are presented chronologically in a sturdy box with discs in individual cardboard sleeves.

The sonics of this set require some discussion. Let me state up front that I find the stereo recordings overall to be excellent with a judicious blend of direct and hall sound allowing inner details to be heard. One can also occasionally hear a breath intake before a big phrase but I did not find this very distracting in the grand scheme of things. The ensemble blend is excellent though at times the cello seems to take a back seat – this is due to the player more than the recording per se. One of the more difficult things to capture is the violin with a correct balance of timbres due to its higher frequency overtones. This is where standard RBCD struggles, sometimes making violins hard to listen to. Harmonia Mundi clearly notes in the accompanying booklet (which, by the way, is excellent and contains a 20 page analysis by George Gelles on the string quartets) that Quartets 7-9 and 12-15 were recorded and mastered in DSD. The rest were, presumably, PCM recordings though no sampling frequency or bit rate is supplied.

Four different venues were used during the recording one of which, the Fisher Center for Performing Arts, was used with both PCM and DSD technologies (quartets 1-6, recorded in PCM and quartets 12 and 14, recorded in DSD in that same venue). Comparing just that venue, I THINK that the sound is just ever so slightly more rounded and natural in the DSD mastered recording. Just one tick closer to reality for me. That said, the PCM master in that same venue is really good. Of the four recording venues, I think the best sound is for the Quartets 7-9 which were done at Skywalker Sound in DSD. This venue (and the accompanying recording equipment) provide the most natural sound in this set. It rivals the very best quartet sound I’ve heard on SACD. The recordings made in the Oji Hall in Tokyo (Nos. 13&15, DSD masters) are just a bit farther away with more hall sound. I prefer the closer-in perspective obtained in the other three venues. So, in all, the sound ranges from 4 stars (PCM, qts 1-6, for example) to 4.5 stars (DSD, qts 12,14 eg) to 5 stars (DSD, qts Op.59 eg).

This set stands as a wonderful testament to the Tokyo String Quartet and the music of Beethoven. My advice is to buy it before it sinks into SACD oblivion. 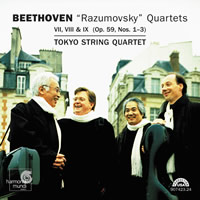 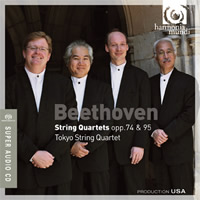 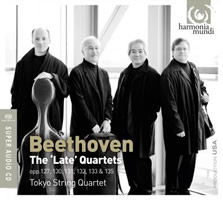