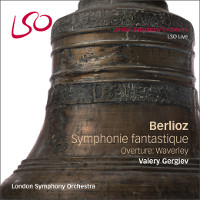 
Berlioz let his imagination run wild in his music, finding inspiration in all manner of sources, including his own turbulent personal life. His experience of powerful, unrequited love finds its expression in the emotionally charged Symphonie fantastique, the story of an artist’s ‘hopeless love’, complete with waltzes, witches and a hallucinogenic nightmare.

There are few orchestras with the music of Berlioz more thoroughly in their blood than the LSO, and here Valery Gergiev brings to bear his opulent interpretation of this landmark piece.

As well as SACD, this recording will be released for the first time on the label on Pure Audio Blu-ray, which will enable the orchestra to be heard in high resolution sound on every Blu-ray player. Bonus HD video footage of the Symphonie fantastique will also be included on the
Blu-ray.

These recordings stem from concerts given in the Barbican (31st October and 13 November 2013) and represent the first release in what promises to be an exciting Berlioz cycle from Valery Gergiev and the LSO.

It is hardly necessary to state that the LSO have the music of Berlioz in their blood. The championship of this composer for 40 years by their late musical director Sir Colin Davis ensured that Berlioz remained in the forefront of this orchestra's repertoire. What may come as a surprise to many listening to this recording, as it did to me, is the total empathy Gergiev displays towards this music.

The opening movement 'Rêveries – Passions' is uncharacteristically relaxed and poetic with beautifully nuanced playing especially from the strings. Gergiev's seating of the orchestra with antiphonal violins is an excellent plus point as is his inclusion of the exposition repeat – something not always found on recordings from the past. The main allegro is exciting but not hard driven.

Again in 'Un Ball' – a difficult movement to bring off – the conductor's insouciant tempo allows elegant phrasing from every section of the LSO and it is pleasing to note that he uses the optional cornet parts that Berlioz later added.

The spatial effects at the start of the 'Scène au Champs' are well conveyed even in the unforgiving Barbican acoustic, whilst the pastoral mood is established perfectly by Christine Pendrill's lovely cor anglais solos. The main body of the movement is characterised by a flowing pace allowing for much fine legato playing and an acute awareness of the music's changing moods.

As one might expect Gergiev is in his element in the final two movements. The 'Marche au Supplice' blazes with the LSO brass and percussion in full cry and once again he includes the repeat in this movement. In 'Songe d'une nuit du Sabbat'. Gergiev makes the most of all of Berlioz's imaginative, and often grotesque, orchestral devices such as the clarinet glissandi (at 0.30), col legno strings (from 8.33) and atmospheric off-stage cast bells. The LSO respond with enthusiasm, bringing his stirring account of 'Symphonie Fantastique' to a rousing conclusion. The fill-up is a satisfyingly spirited performance of 'Waverley', one of Berlioz's least performed overtures.

In a new departure for LSO Live the 2-disc package contains both a hybrid SACD with 5.1 multi-channel and 2.0 stereo mixes and also a Pure Audio Blu-ray disc (DTS – HD MA 24bit/192kHz).
The latter also includes what is modestly described on the CD case as 'video footage', but is in fact an excellently filmed complete Barbican performance of the Symphonie Fantastique in high definition video. This is well worth watching if only to marvel at how the tooth pick wielding maestro gets such compelling results from his orchestra.

Constraints of the Barbican acoustic apart, the sound quality on both SACD and Blu-ray discs is clean and impactful, but like all LSO Live discs they need to be played at a suitably high volume to give of their best.

Even without taking into account LSO Live's competitive pricing this issue represents a considerable bargain for those sympathetic to Gergiev's persuasive Berlioz and I look forward to its future continuation. 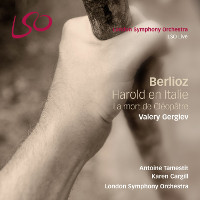 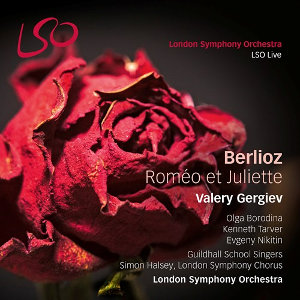