Elgar: The Dream of Gerontius - Davis 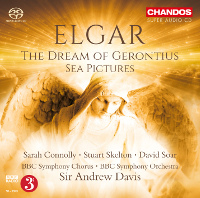 
Chandos Records is delighted to present this new recording of Elgar’s choral masterpiece The Dream of Gerontius and the enduringly popular song cycle Sea Pictures. The BBC Symphony Orchestra and Chorus are conducted by Sir Andrew Davis, a peerless Elgarian who this year was awarded the prestigious Elgar Society Medal in recognition of his outstanding contribution to the composer’s music. In Gerontius the soloists are Stuart Skelton, David Soar, and Sarah Connolly who also sings Sea Pictures. This recording was made in the days leading up to their triumphant live performance of Gerontius in April this year, after which The Guardian praised Skelton as ‘the ideal tenor for the role of Gerontius’, Soar as ‘an implacable, dark-sounding Priest’, and Connolly as ‘a consummately polished Angel’.

The Dream of Gerontius was commissioned in 1900 for that year’s Birmingham Festival. The score was produced in a hurry but Elgar had long before known the text which the work sets, Cardinal Newman’s religious poem that powerfully recounts the final dream of a dying believer and the journey of his soul through death to Purgatory. At the disastrous premiere the performers struggled with Elgar’s score but this did nothing to stop the immediate popularity of the work. It is recognised today by many as the greatest choral work by an English composer.

Written not long before Gerontius, the song cycle Sea Pictures sets a collection of poetry by different authors, all on a single, loosely related theme. Inspired by Elgar’s love of nature, the songs explore the emotional resonances of the sea, from serene still waters to a mighty ocean storm.

It is almost half a century since Sir John Barbirolli's account of Elgar's greatest oratorio 'The Dream of Gerontius' was recorded for EMI in Manchester with the Hallé Orchestra (27-30 December 1964) and not surprisingly it quickly achieved the classic status it still enjoys today. For some it will always be the only recording they wish to listen to, thanks mainly to the incomparable singing of Janet Baker as the 'Angel' and the marvellous flexibility and sweep of Barbirolli's conducting.

But, as is the case with all musical masterpieces, there is always room for new performances from the artists of today to challenge those from the past, especially when they are as outstanding as this new SACD set from Chandos.

The latest version of this much-recorded work has the inestimable advantage of being conducted by Sir Andrew Davis, a conductor with a pre-eminent reputation in English music and who for many years has been one of its finest exponents. (The DVD of his 1997 performance in celebration of the tercentenary of St. Paul's Cathedral is still rather special and well worth watching). Now we have Davis's excellent interpretation on SACD, expertly recorded in superb 5.0 channel surround sound.

In Davis's hands the score unfolds with an inevitability that only a great conductor can bring to it.
It is beautifully paced – expansive yet always with a forward moving pulse. The conductor's vast experience in both the opera house and the concert hall allows him to position the piece somewhere between an oratorio and an opera by ensuring that his soloists and choir extract the maximum drama from Newman's words. In this he is aided by splendid playing from the BBC Symphony Orchestra whose absolute familiarity with this composition and empathy with their former Chief Conductor is apparent throughout.

The shadow of Wagner's 'Parsifal' looms large over 'The Dream of Gerontius', so the choice of the Australian tenor Stuart Skelton as Gerontius is an inspired one. His heroic ringing voice has the necessary heft to deliver the more histrionic passages of the part effortlessly without losing any beauty of tone and his diction throughout is impeccable. Perhaps what is even more impressive is his ability to pare down his voice to a whisper in “I go before my Judge” just before Davis builds the orchestral passage that follows to an awesome climax.

Sarah Connolly uses her luxuriant mezzo-soprano with noteworthy intelligence and characterises the 'Angel' perfectly. The tonal beauty and firmness of her singing in “My work is done” at the start of Part II and in the valedictory “Softly and gently” is matched by her perfect enunciation of the text – altogether a consummate performance.

The young bass David Soar as Priest and Angel of the Agony, delivers his solos with great authority and vocal firmness.

The well-drilled BBC Symphony Chorus – obviously inspired by Davis's impassioned direction – make the most of the huge choral outbursts such “Praise to the Holiest” and the Chorus of Demons, but are equally impressive as Assistants in the more tranquil passages in Part I where they display great sensitivity in their singing.

The recording venue was the Fairfield Halls, Croydon whose excellent acoustic conveys a sense of spaciousness without in any way lessening the music's impact. It is also worth mentioning that the organ pedal notes are captured with a depth and solidity that enhances the music's sense of scale for the listener at home to thrilling effect and as a final bonus, at the end of the second SACD, we are given a further performance of the Prelude in its concert version.

Sarah Connolly is also the soloist in Elgar's song cycle 'Sea Pictures' that precedes the oratorio on this 2-disc set. These are five settings of poems by different poets including one by Caroline Alice Elgar, the composer's wife. Though written for a Contralto, many Mezzo-sopranos have performed these exquisite songs with great success and this is in fact the second time Sarah Connolly has committed 'Sea Pictures' to disc; the first being eight years ago for Naxos. Her singing is as rich and eloquent as on the earlier release but, as in the case of the main work, the greatest competition again comes from the glorious 1964 recording by Janet Baker and the London Symphony Orchestra conducted by Barbirolli that is available on SACD Elgar, Delius: Cello Concertos - du Pre, Barbirolli, Sargent.

Davis's tempi are swifter than those adopted by Barbirolli in each of the five songs – something that will please some more than others – but his use of the ad libitum organ parts in 'Sabbath Morning at Sea' and 'The Swimmer' adds a thrilling weight to their final stanzas.

This outstanding release is, without doubt, the finest recording of 'The Dream of Gerontius' to have appeared on SACD and it makes one eager for the forthcoming Chandos recording of Elgar's 'King Olaf' from Davis and Bergen forces.

I concur with the review completely. I downloaded the multichannel version from Chandos (FLAC, 24bit/96Khz, 5.0). The sonics are superb giving me room filling sound without drowning out the soloists. This is an opera that will keep your interest throughout. You won't fall asleep. The dynamic range in some parts is quite wide so keep your remote handy. I am not ordinarily an opera enthusiast. But, the singing is beautiful in every way. Combine this with a thrilling orchestra and chorus and I found myself completely emotionally connected. 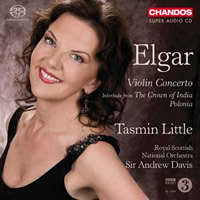 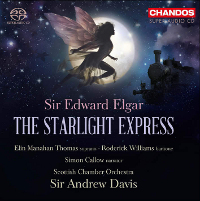 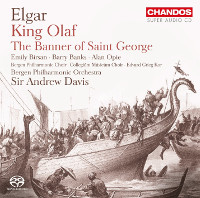 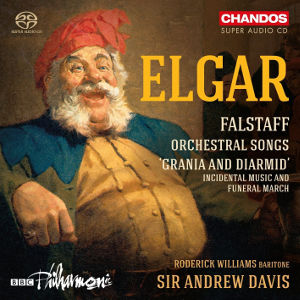 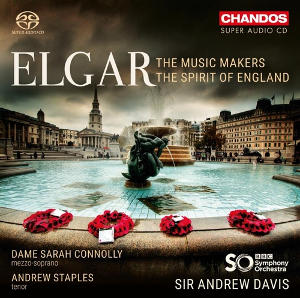