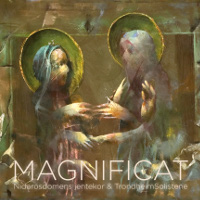 
The MAGNIFICAT is the Virgin Mary's song of praise to God after one of the Bible's greatest wonders: the angel Gabriel visiting her with the message that she is to be the mother of God's son. In his setting composer Kim André Arnesen expresses the feelings Mary must have felt: wonder, devotion, gratitude, joy, humility, hope and compassion. God's selection of an unknown woman living in poverty to be the mother of His son is a bottom-up view of the world if ever there was one – and Arnesen sees the Magnificat as offering support and hope for all people struggling against adversity or in need of strength.

MUSICA CELESTIS portrays the ceaseless praising of God by angels in heaven. Aaron Jay Kernis builds his work around a fairly simple melody which he remoulds in a series of variations.

The intensely beautiful and mostly barren Hardangervidda mountain plateau inspired Ola Gjeilo to write TUNDRA, while his SONG OF THE UNIVERSAL expresses unabashed optimism, exuberance and poet Walt Whitman's unwavering confidence in our deeper humanity – all through the prism of a big, warm, beating heart.

Recorded at the Nidaros Cathedral, Trondheim, Norway
May 2013, January and May 2014 by Lindberg Lyd AS

The title 'Magnificat' might make some collectors perceive this to be a disc of sacred music; not so, despite its cathedral recording venue, but it certainly is a choral one, with the addition of a palette-cleansing treat of a piece for solely for string orchestra.

Kim André Arnesen (b.1980) is at the forefront of choral music, taking commissions from choirs all over the world, and his 'Magnificat' was commissioned by Nidaros Cathedral Girl's Choir and their conductor Anita Brevik, explicitly to be performed in the stirring acoustics of the huge internal Gothic space of Nidaros Cathedral, Trondheim. Recording in such spaces is a major aim of Norway's 2L company, and they have produced a marvellously realistic recording of some very palatable modern music.

Arneson's 'Magnificat' score is for sopranos and altos, which could be female or male; in this case the 61 strong Nidaros Cathedral Girl's Choir (established 1992), divided into Soprano 1 and 2, Alto I and 2. Arneson also specifies a mature solo soprano, although two soloists share roles in this case. Accompaniment is pseudo-orchestral, comprising the strings of TrondheimSolistene, a piano and the cathedral's Steinmeyer organ. For the multichannel capture, the Trondheim Soloists are arranged in two rows, with violas and cellos at the front and violins arrayed behind them. First and second violins are separated by the double bass in the centre. Usually the violins are at the front, but in this reverse seating, the orchestral sound is darker and richer tonally, fitting the meaning of the texts. Behind the strings, there are rows of girl choristers (61 of them), with S1 and S2 to the left, A1 and A2 right. The piano is behind the conductor and thus at the back of one's 5.1 listening room, as is the much further away organ.

Magnificat is a song of praise alluding to Mary's visitation from the Angel Gabriel in which he told her that she would bear God's Son. Arnesen has taken a quite humanistic view for his setting, which portrays what a young, poor woman would have felt after the shock of such a revelation, and he dedicates this piece as a prayer for the sick, the poor and for those who are struggling. Wonder, devotion, gratitude, joy, humility, hope and compassion - all of these are convincingly expressed in the seven musical sections of the Latin Magnificat.

As an approximate reference for potential listeners, Arnesen could be called a New Romantic; his music is essentially tonal, with scattered cluster tones (which have become essential for sacred music for a decade or so) and specific passages with stronger dissonances. His style is deeply lyrical, with a number of memorable (and singable) melodies, which are presented with rapidly changing timing signatures, giving the texts and melodies a strong sensation of fluidity and spontaneity. Some critics might mistake the beauty of Arnesen's melodies for over-sweetness, but for me the sheer sincerity of the lyricism applies not just to the melodies themselves but is also very clear in the commitment of the players and singers.

The performance of the Girls Choir is remarkable; they could be mistaken for a professional ensemble. Under the sure and sensitive guidance of their Artistic Director and conductor, Anita Brevik, their rhythmic unity holds together in the face of Arneson's frequent change of time signatures. They have to negotiate sections marked 'individual breathing' and follow expressive requirements such as "With Wonderment", "Piously", "With Thankfulness" and "With Compassion". Their level of commitment and skill in phrasing are deeply touching, as the piece moves from the opening gravitas of the violas and cellos to the final seven-fold conclusion of "Amens". Praise too for soprano soloists Lisa Granden Berg and Cecilie Ertzass Overrein, in particular for the latter in her haunting duet with a sweet-voiced amateur soloist from the choir.

Following the 'Magnificat', TrondheimSolistene reorganise themselves into a broad, complete circular single seating order, in what appears to be the Cathedral's spatial crossing. Microphones obviously are sited at the centre of the circle for the all-around multichannel capture, the lower strings around the front half of the circle, violins at the back. Their output is Kernis' 'Musica Celestis', from the ancient term for the alleged continuous singing of Angels to God, praising Him without ceasing.

American composer Aaron Jay Kernis (b.1960) has an eclectic musical language, but since 1990 his music has become more transparent and richer in eloquent emotion. 'Musica Celestis' was developed from the slow movement of his First String Quartet and takes the form of a set of variations on a simple, broad theme with its accompanying harmonic pattern. Its mystical sound, set in the soft, awe-inspiring reverberation of the high-ceilinged Cathedral's acoustic, clearly suggests the conceit of a musical Heaven. The Trondheim Soloists play magnificently - they can give the Ostrobothnian Chamber Orchestra a run for their money - and Kernis' truly imaginative string scoring is unforgettable (a comparison might not be averse, perhaps, with Samuel Barber, who took up and expanded the slow movement of his own first quartet).

Ola Gjeilo, another Norwegian who studied composing at New York's Juiliard School, is now very well-known in the world as a pianist/composer. 'Tundra' is a choral work based on a short poem by a frequent collaborator, Charles Anthony Silvestri, beginning "Wide worn and weathered, Sacred expanse Of Green and white and granite grey...". Choir, TrondheimSolistene and piano are seated where they were for 'Magnificat' and Gjeilo plays the piano part himself. A pulsing string and piano underlay supports a multi-layer melody of haunting beauty, which surges into a huge climax, suggesting the vast spaces of the northern lands - "While clouds dance Across the vast, eternal sky".

Gjeilo's next piece is based on a few excerpts of Walt Whitman's 'Song of the Universal' and uses the same forces as 'Tundra'. Whitman is not always lucid in his poetry; here he is deeply philosophical and considers mankind's position in Nature, and perhaps God's influence on time and space. It is a lovely, atmospheric, surging piece, with rapidly moving piano and strings but slower vocals, and a mystical section with soft chanting. Like all the pieces on this disc, 'Song of the Universal' truly suits the imposing Nidaros space which surrounds it.

This is a disc which is so much better in multichannel mode. An intimate relationship with the various musicians develops because of the clarity of the fully used sound stage, and a sense of place is felt through the marvellous and awe-inspiring resonances of Nidaros Dom, including the organ with its supportive deep pedals and echoing solos. Probably readers will be asking "How about the enunciation?" As one might expect, the resonance and relatively distant pick-up settings, without spot microphones, make perfect enunciation from a large choir of over 60 impossible, but increasing the volume level helps clarity of voices (and also the focus of the sound stage). Following the texts in the booklet is usually helpful, unless there is much polyphonic singing from the choir. All the solo sopranos are generally easy to follow.

One now takes for granted the solidity and lucidity of 2L's recordings. I mostly used the SA-CD disc with its DXD origin, but made some comparisons with the Blu-Ray disc failing to notice any obvious differences; but there was a discrepancy in the respective volume levels, making comparisons difficult. The Blu-Ray, however, has a video of the first section of 'Magnificat', which gives a good idea of the layout of choir, string orchestra, piano and organ. I don't have equipment for the Auro 9.1 Height Layer.

I recommend this programme unreservedly as a feast for lovers of choral music.

A recent upgrade to my home theater system led me to once again play the blu ray version of Magnificat in Auro 3D format. I've listened to this music many times and it never gets old. As with all 2L blu rays, the elevation speakers are not used for object based sounds. Rather, a group of microphones are placed high up in the air to record music as it fills the huge space in the cathedral. I do find the experience immersive. Different instruments will challenge your system. Track 3 "Quia fecit" rumbles through your subwoofers with deep organ pedal sounds. Track 8 "Musica Celestis" includes a fast and intense cello/double bass section which will test your systems transient abilities. The chorale throughout the music is beautiful and I particularly like track 7 "Gloria Patri". All in all, this is a favorite of mine.