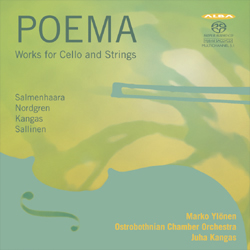 What a pleasure it is to have another of Alba's issues of the Ostrobothnian Chamber Orchestra's compilation of works for Scandinavian string orchestra! The quality of playing of this group is phenomenal, particularly when conducted by Juha Kangas, their founder and honorary conductor (Sakari Oramo took over as Chief Conductor in 2013).

On this disc, the orchestra's soloist is Finnish cellist Marko Ylönen (b.1966) whose myriad of international concert appearances (orchestral, chamber and Festival) are interwoven with his interests in education. Since 2000, he has been a tenured teacher of cello and chamber music at the Sibelius Academy.

The four contemporary pieces selected by Kangas may not all have the title of concerto, but they are all substantial pieces of string orchestra and cello, each with elements of the concerto concept. They differ somewhat in that the orchestra plays a bigger and more active role with the cello than in classical concertos, and they also mimic or develop some of the cello's dazzling virtuoso passages. Finally, each composer has given both orchestra and soloist a wide rage of new textures for strings (relished by the Ostrobothnians), together with unusual, powerfully expressive features and new technical wizardry for the solo cello. The general mood of these works is that said to illustrate (some of!) the Finnish psyche - serious, a tendency to radical individuality and a wicked sense of satire.

Erkki Salmonhaara (1941-2002) joined the Avant-garde movement in his early years, and introduced the web technique of Ligeti to Finland. Late in the '60s, however, he switched to the 'neo-tonal' group, who were sometimes insulted by being called 'Neo-simplest'. 'Poema' (1975) is the most tonal of the four pieces on this SA-CD. It is inspired by Chopin's Piano Sonata in B-flat minor, but transposed to E flat minor. Chopin's marching tread (ostinato) in the sonata's Funeral March appears, with minor harmonies replacing major ones. A fragment of the march's main theme then follows. The music is gloriously sonorous orchestrally, and the solo cello is dark-toned and resinous, singing an almost unstoppable narrative throughout the pieces. A more or less central bridge passage entices the cello to croon a quasi-Finnish folk tune, but this is soon dispelled as the funereal mosaic reappears. The flow of energy is drained near the end, where the cello and a single violin duet together, over a cold, pecking pizzicato from the orchestral violins. Overall, 'Poema' is deeply expressive and richly accoutred. I was swept along in a grip that did not relax until the echo of the very last note has sounded.

Pehr Henrik Nordgren (1944-2008) wrote many pieces specifically for the Ostrobosnian Orchestra. He too started with the Modernist phalanx, but soon forged his own way, incorporating folk elements. In 1973 he returned to Finland after his studies abroad and settled in Kaustinen, a small town known as the seat of the Western Finnish folk tradition, where the Ostrobothnian Chamber Orchestra also has strong roots. Nordgren has been collaborating with the Orchestra and Kanga for some time, and is now regarded as the leading Finnish composer in this field.

Nordgren's HATE-LOVE, Op. 71 for cello and strings (1987). The cello is most effective in expressing Nordgren's innate melancholy and inward strength (he composed 5 cello concertos), and the one-movement fantasy explores the features of hate and love as interactive aspects of humanity. The music is intense, and the cello is not only given extraordinary virtuosic work, but communes deeply with the orchestra. Moods 'Sensitive' and 'Insensitive' are explored, as well as hate and love, with vigour and tranquility intertwined. The music is necessarily dissonant, but at the same time melodic. Nordgren's multi-layer orchestration with the strings is brilliantly translated by the Ostrobothnians, with some wonderful sounds, for example the extraordinary grinding from the the two double basses in their deepest region. Ylönen sets forth Nordgren's narrative with expert technicality and knowing touches of Finnish satire.

Kangas' Concerto for Strings (2010) is rooted in classicism, with the standard three movements. However, this is sonically an obviously post-modern work, the "spikiest" of the four on this disc. Movement 1, Espressivo, has wide leaps in melodic fragments, violins swooping up and down and shimmering textures from the orchestra, followed by multi-dimensional pizzicato accompaniments to the cello's sombre oration. Movement 2 is entitled 'Due intermezzi' - another touch of satire, as the 'due' are two scherzos. Highly spirited and blown along by unexpected gusts, this short movement taxes the cello, all cello fireworks insouciantly mastered by Ylönen. Movement 3 is a Presto of the Shostakovich type; the longest movement of the concerto and the most energetic. There are attempts at humour, but this is not the type of music which makes you laugh, but serious black humour. There is, however, a sort of coda in which both orchestra and cello cool down for a peaceful ending.

Aulis Sallinen (b.1935) has a fine reputation for his love of chamber music, and Kango finishes the programme with Chamber Music VIII Op. 94 (2008-9). Subtitled 'Paavo Haavikke in memorium', Sallinen saluted the writer of his opera libretti. Indicative of Sallinen's current position in music, this work was commissioned jointly by Amsterdam Sinfonietta, Würtenburgische Kammerorchester,Scottish Ensemble and Sydney Conservatorium.

The single movement is surely a lament in which the solo cellist is in turn eloquent, desolate and radiant. Summing up, perhaps Sallinen expresses in this music the art and beauty of Haavikke's work as well as the composer's loss. The cello line is soberly invented, deeply emotional and exquisitely garbed in saturated dark colours by Ylönen. The orchestral parts seem at first unpredictable in colours and moods, but there is a backbone of purpose throughout.

Simon Fox-Gál's engineering is, as usual for the Ostrobothnians, crystal clear, intimate and realistic in the myriad timbres which the orchestra can produce. Snellman Hall in Kokkola Centre is both the recording venue and the homebase of the orchestra. Although there is a fine bloom to the orchestra, the overall acoustic is unobtrusive: perhaps the 600-seat hall has been reduced with its folding wall to a smaller space of 500 seats. Jouni Kaipainen's indispensable notes (in Finnish and English) have biographic and musical notes and there are performer's biographies and some b/w photos.

Collectors of this series of SA-CDs from the Ostrobothnians, with their astonishingly tight ensemble and beautiful, flexible sound, will need no recommendations to snap up this disc. For those wavering because of the contemporary programme, I can say that 'Poema' itself is nearly in high Romantic style, and the other pieces are certainly accessible, not Avant-garde; based on melody (even if fragmentary) and featuring Marko Ylönen's warm, fluidly singing cello sound.