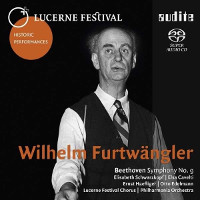 
Wilhelm Furtwängler conducted Beethoven’s Ninth Symphony more than a hundred times. In August 1954, three months before his death, he directed his last performance in Lucerne which proved to be an “elemental musical event” (Neue Zürcher Zeitung). Alongside the brilliant Philharmonia Orchestra and a stellar cast of soloists (Elisabeth Schwarzkopf, Elsa Cavelti, Ernst Haefliger and Otto Edelmann), Furtwängler accentuates the visionary character of this monumental
score: he charges the outer movements with an almost unbearable sense of suspense and interprets the lyrical passages, especially the slow third movement, cantabile and in flexible tempi.

Comparing this “Lucerne Ninth” to Furtwängler’s other benchmark interpretations of the Ninth – such as his famous performances in Berlin (1942) and Bayreuth (1951) – allows for a closer examination of the constants and changes in his very subjective view of Beethoven’s final symphony. For the release of this concert recording as part of the series “LUCERNE FESTIVAL Historic performances”, the original tapes from the archives of SRF Swiss Radio and Television have been newly re-mastered. The pitch has been adjusted anew so that the recording, for the first time, sounds as close to the original as possible – closer than ever before.

This correction in pitch not only changes the lengths of the movements, but also the dramaturgy - the 3rd movement, for example, is almost 17 seconds longer than on comparable recordings, which considerably changes the musical expression. Wilhelm Furtwängler (1886-1954), who spent the final years of his life in Clarens on Lake Geneva, was one of the defining artists of the Internationale Musikfestwochen Luzern, today’s LUCERNE FESTIVAL. Whereas Arturo Toscanini played an important role during the festival’s founding years of 1938/39, Furtwängler was instrumental in establishing it as one of the then small number of great festivals. In 1944, he came to Lucerne for the first time to conduct two concerts; from 1947 – after his conducting ban had been lifted – until his death he came to Lucerne each summer (with the exception of 1952) where he enjoyed a special status.

Complete with previously unreleased photos from the festival’s archive, the 32-page booklet in three languages contains extensive information on Wilhelm Furtwängler’s work in Lucerne, as well as providing the context for this performance. In cooperation with audite, LUCERNE FESTIVAL presents outstanding concert recordings of artists who have shaped the festival throughout its history. The aim of this CD edition is to rediscover treasures – most of which
have not been released previously – from the first six decades of the festival, which was founded in 1938 with a special gala concert conducted by Arturo Toscanini. These recordings have been made available by the archives of SRF Swiss Radio and Television, which has broadcast the Lucerne concerts from the outset.

Carefully re-mastered and supplemented with photos and materials from the LUCERNE FESTIVAL archive, they represent a sonic history of the festival.

A (rightly) feted account from Furtwangler shortly before his (relatively) early death.

Compared to the likes of (in alphabetical order) Beethoven: Symphony No. 9 - Haitink, Beethoven: Symphony No. 9 - Järvi & Beethoven: Symphony No. 9 - Vänskä, this is an entirely different conception for the first three movements. The first movement is between 3 minutes (Haitink) & 5 minutes (Jarvi) slower in Furtwanglers hands; the "poco" in "Allegro ma non troppo e un poco maestoso" is roundly ignored to give a quasi-Brucknerian feel to the work, replete with a wide ranging rubato seldom heard today with such conviction. For all the purist angst this provokes following a HIP or period instrument approach, it is impossible to deny the magnetism that Furtwangler imbues this marvellous score.

The second movement is, again, taken slowly although the account is "faster" than the more modern trio (they fit in nearly 2x as many notes in little over 1-2 minutes extra time!) and this is one aspect where the performance doesn't perhaps transfer to modern ears as well as elsewhere. Most extreme but arguably the most successful part of this performance is that of the Adagio molto e cantabile; although Furtwangler lavishes nearly half as much time on each note as our modern conductors, the sheer beauty and love that the Philharmonia exudes for him is magical.

The finale is, compared to the first three movements, nearly conventional in the more modern tempo choice of Beethoven performances. Indeed, compared to some more HIP inspired conductors, the tempos of Furtwangler are rather less extreme; the singing of all concerned is very good and the playing of the Philharmonia makes one suspect that Karajan, as chief conductor of the Philharmonia, would not have been too disappointed had the Berlin position not become available when it did.

I have not heard Beethoven: Symphony No. 9 - Furtwängler, so cannot comment on the relative merits of each transfer. What is remarkable is how well these mastertapes have been preserved; there is little sign of deterioration and the amount of detail the tapes have released would shame many a studio recording for some years to come. Whatever audio "cleaning" Audite have visited on these tapes is wholly sympathetic; there is a real sense of the acoustic around the music, not something applied so heavily it sounds utterly synthetic. This is particularly apparent in the tone quality of the soloists who sound (mono apart) as vivid as many more modern (studio) recordings.

If you have never heard this account before, this incarnation is almost certainly the best value remastering yet issued. 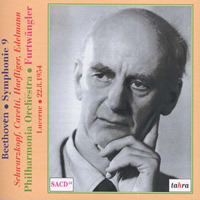 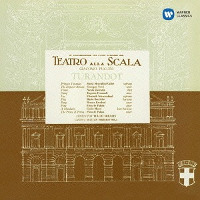