Thank you for your detailed review, as I had been hesitating for months over this one. As a registered user on the Digital Concert Hall, I have had the pleasure to watch ...

oneairb wrote: "The stereo layer is fine. The surround layer is poor." Does the stereo layer exhibit a genuine two-channel mix, with discrete sounds left, right and center? ... 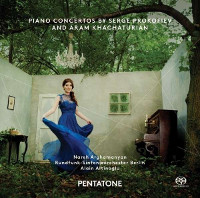 
Nareh Arghamanyan is not only one of the most technically resourceful pianists of today’s generation, but her interpretations, her rich and colourful tone, combined with an exceptional gift for storytelling also enable Ms. Arghamanyan to present something remarkably unique and precious. We are fortunate to be able to savour it once again in the upcoming PENTATONE release of Serge Prokofiev’s Piano Concerto No. 3 and Aram Khacaturian’s Piano Concerto.

The Prokofiev 3rd is a work that calls for virtuosity, and Ms. Arghamanyan delivers in full. She exits with a hair-raising finale that leaves you both drained and delighted at the same time. This brilliant artist accomplishes an equally marvellous performance with the bold and gregarious Khachaturian concerto as with Prokofiev’s intricate concerto. She skilfully uses its spicy harmonies and colourful orchestration to charm and captivate.

The collaboration between Nareh Arghamanyan, the Rundfunk-Sinfonieorchester Berlin and conductor Alain Altinoglu resulted in a strong sound recording that surpassed expectations. Engineered by Polyhymnia International, needless to say that this SACD recording lives up to the extremely high standards of any other PENTATONE recordings.

Nareh Arghamanyan's first recording for PENTATONE of solo piano works by Rachmaninov showed her to be an artist of surprising maturity who combines musical acuity with a prodigious technique. Her follow-up disc of the Liszt Piano Concertos confirmed one's favourable opinion of her potential in virtuoso repertoire.

Her latest release couples Prokofiev's 3rd Piano Concerto – his most popular and most recorded – with the Piano Concerto of her fellow Armenian Aram Khachaturian, a work rarely appearing on concert programmes and even less frequently on disc and as in the earlier Liszt recording she is partnered here by the Berlin Radio Symphony Orchestra conducted by the young French-born conductor Alain Altinoglu with whom she obviously has a close rapport.

Khachaturian's Piano Concerto dates from 1936 and attempted to revive the bravura pianistic traditions of Liszt while at the same time introducing material in the concerto that derived from Armenian folk sources, though the composer denied quoting directly from such sources.
The bass drum thwack that opens the work resonates impressively in PENTATONE's vivid recording made in the Haus des Rundfunks, RBB Berlin in October 2013 and Nareh Arghamanyan's decisive first entry illustrates both the physical strength of her playing and her virtuosity as the movement proceeds. She plays the first of the movement's two long solo passages with a relaxed improvisatory feel and brings great exuberance and stunning virtuosity to the second.
The haunting central 'Andante' begins and ends with the bass clarinet extemporising under soft chords on muted strings before the gentle entry of the soloist. Khachaturian's scoring calls for a most unusual, and frankly bizarre sounding instrument – the flexatone, to be used in this movement. For this recording, however, Alain Altinoglu, has replaced the flexatone by a musical saw which certainly blends better with the strings and sounds here little different from a theremin or an ondes martinot.

The jazzy and sometimes even orgiastic finale is given a terrific performance from both soloist and orchestra, the music only slowing for the brilliant cadenza before building to a restatement of the first movement's opening theme and then driving to its thrilling and emphatic final chords.
Though this concerto has often been accused of brashness and empty rhetoric it is still worth an occasional outing especially when heard in such a beautifully recorded and committed performance as this one by Nareh Arghamanyan.

The Prokofiev concerto that follows faces much tougher competition from countless rival recordings and though Arghaman's playing has all the necessary fire power her performance fails to match the best of the SACD alternative versions in this piece that include those from Byron Janis, Freddy Kempff and Denis Matsuev. Thanks to the rather cautious tempi adopted by Altinoglu and Arghamanyan her account lacks the flamboyance of those mentioned above and its slightly restrained quality, while sometimes appropriate in the slower section of the work, misses some of the composer's wit and panache in the outer movements.

It must, however, be said that the orchestral contribution could hardly be finer. I can't recall a recording that reveals so much subtle detail in Prokofiev's orchestral writing and needless to say PENTATONE's sound quality is beyond reproach.

Those seeking this release for the Khachaturian Piano Concerto need not hesitate.

While the recent Chandos recording of the somewhat silly Khachaturian Concerto is perhaps superior, the reason to buy this disc is the simply wonderful Prokofiev No 3.Sorry Graham!

The pianist who is new to me plays with wonderful lyricism but never losing forward momentum. She really emphasizes the differences in the variations of the theme in the second movement which are often ignored.

Add to this great playing from the orchestra beautifully caught in a SOTA recording, it’s a winner all round.