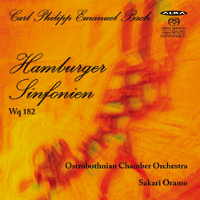 Carl Philipp Emanuel Bach (1714–1788), the second son of Johann Sebastian Bach, wrote his music in a transition period from 'Baroque' (about 1600-1750) to the following 'Classical' period, the age of Haydn and Mozart. During this period, CPE was regarded as one of the most influential and prolific composers of the eighteenth century, with an oeuvre covering nearly all of the musical genres except opera. His developments in some of these genres even continued as far as the arrival of German 'Romantic'. Many of these musical impulses came to music from the evolution of Literature and Philosophy; in particular, the style of 'Empfindsamkeit stil' (sensibility style) was heartily propagated by CPE.

The symphony itself arose in music's transition period, it appeared during the 1730s in opera houses of Milan. The name came from the orchestral prelude from Italianate operas, 'Sinfonias' in Italy, 'symphony' in English, in three parts (movements), fast-slow-fast. The pieces were also rather short, in total 10-20 minutes, and the finale was generally a popular dance. In due time, the symphony was adopted by many composers of courtly music such as Stamitz, raising the bar of orchestra performances, which encouraged more composers to try and write symphonies.

CPE Bach's main work was mainly as a harpsichordist, and the music he composed was played for his own performances, so at an early age, his orchestral composing was somewhat limited. The Catalogue of his musical estate (NV 1790) lists only eighteen symphonies composed over a period of thirty-five years (there are likely to be others lost). During his period in Berlin, CPE tallies only 8 symphonies; but here CPE shows that he has acquired thorough knowledge about the early Italian Sinfonias, so his own early works were mainly for strings and 'basso continuo' (string bass and harpsichord). Some years later in the 70s he added woodwind and/or brass to the scores.

After his move to Hamburg in 1768, Bach composed two sets of symphonies on commissions: in 1773 six for string orchestra, Wq 182, for Baron Gottfried van Swieten and later for four symphonies with full orchestra, requested by an unknown patron. Van Swieten was a highly regarded diplomat, librarian, government official and music-lover, who later in Vienna became a patron for Mozart and Beethoven.

It is thought that CPE, very proud at being highly regarded by such an esteemed scholar as van Swieten, put extra effort into the composition of his 1773 six string symphonies for his commissioner. CPE's set, Wq (Wotquenne) 182 has been the most popular of his symphonies through the ages (but they weren't his own favourite!). Even in his own time a reporter of Allgemeine Musikalische Zeitung wrote “Seldom has a musical composition of a more exalted, saucy, and humorous character poured forth from such an ingenious soul.”

Intensely aware of the 'Empfindsam Stil' with its strong themes, sensitive melodies, lack of over-ornamentation and startling harmonies set in unconventional structures, CPE also added to his symphonies the principals of 'Sturm und Drang' ('Storm and Stress'), further intensifying the emotions in his music. Rather than the domination of strings playing in unison or thirds of most other symphonists, CPE's scores are much more inventive, changing moods, odd harmonies and unexpected textures in just a few seconds. This requires techniques which must play unpredictable changes of mood, dynamics, ornaments and speed - you simply just can't predict what comes next. An example: dizzy, tumultuous runs of fast violin swirls suddenly stop dead for a brief silence, after which there is a soft, slow, achingly beautiful melody which suddenly is threateningly snarled at by loud double basses before the roulades scurry off fizzingly. High contrast, angular themes, unusual harmonic sequences - these new symphonies from Hamburg required truly great musicians for their performances!

From the first notes in Alba's SACD, I was gripped by the superbly passionate playing of the Ostrobothnian Chamber Orchestra as guided by their director, Sakari Oramo (born in 1965 and currently also BBC Symphony Orchestra chief conductor, OBE and Elgar Medal in 2008). Their playing is breathtaking in their unified sharp-edged attacks throughout, with high contrast dynamics, richness in emotional melodic lines. Several of the slow movements are made by the Ostrobothnians to sound like brief colourful tone-poems, an amazing achievement of CPE with Oramo and his strings.

In the multichannel version in particular, the fine recording of Simon Fox-Gál in Finnish Kokkola's multi-purpose Snellman Hall provides a clean ambience, which gives a complimentary resonance to the already rich-sounding Ostrobothnian strings. The focus of the sound stage has a realistic distribution of instruments, with the first and second violins clearly separated, essential for CPE's frequent tossing, hurling or just jovial conversations from side to side of the stage. Oramo's deep attention is heard in a few quiet grunts from time to time.

The obvious rival recordings for Oramo's Six Symphonies are those of Trevor Pinnock and The English Concert with authentic instruments. The first disc, from DGG's Archiv, 1979 was long regarded as the leading CD for Wq182, and has recently been remastered in 4-channel on SACD by Pentatone in their Remastered Classics series. While both performances are more or less the same in technicality, there are some aspects which a potential buyer might consider. These two fine recordings differ mainly on the brighter upper partials of the catgut strings used in the English Concert violins. Comparing the two recording venues suggests a notable difference of ambiences, with Pinnock's spare but rather more open and airy, like a large room in a Duke's mansion. The Oramo modern violins sound more deeply resonant in their own venue. The overall difference is illustrated in the relative length of movements; Pinnock generally has slow movements with a relative 50% or so slower than Oramo. Some of the Presto final movements are also played less urgently with Pinnock, while the Ostrobothnians head for more virtuosic brilliance.

To summarise, while Pinnock and the English Consort certainly exhibit much of CPE's expression of 'Empfindsamkeit stil', their approach has more Baroque-like humour, suggesting the presence of gentility. Oramo and his Ostrobothnians tend to express 'Storm and Stress' very strongly and impressively, demonstrating why numbers of Haydn's symphonies are themselves stormy and stressful.

Personally, I would be happy to have both versions in my collection. If I could only have one of the pair, it would have to be Oramo's passionate, exciting and fully involving interpretation. Which of these top-of-the-pile SACDs is up to you, but if you haven't yet heard CPE Bach's major step in music, now is the time. You are really missing something special!