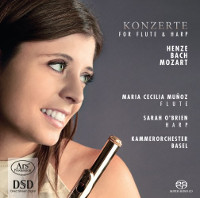 The German label Ars Produktion wants ‘to provide young, aspiring artists and their unique musical projects’ with ‘an unwavering commitment to meet the acoustic requirements of the music ’. That this is not just commercial talk has been proven over and over again in their productions, and this disk is no exception. Agreed, Mozart’s concerto for flute and harp is not ‘unique’, but in the context in which it is put, it is: ‘a series of music-historical interconnections within its own musical cosmos’.

The focal point of this project is Carl Philip Emanuel Bach and his links with Henze and Mozart.

The starting point of this disk’s programme is Hans Werner Henze’s transcription of one of C.P.E. Bach’s keyboard Fantasias as, so he says, the master himself was the starting point of his work as a composer. He (Henze) wrote this piece in 1922 as a ‘pièce de circonstance’ to complement Mozart’s concerto for flute, harp and strings, ‘retaining the note values of the original with exactitude’. It is attractively written and, in a way, ‘strangely’ accessible. There are several versions; the one on this disk is the one for flute, harp and full string orchestra.

The second and central part of this disk is C.P.E. Bach’s concerto for flute, strings and cembalo Wq. 22. Its importance lies in its ‘modernist’ approach, with harmonic elements which, in those days, were seen as radical. It is full of surprising twists and turns, lively brilliance and hence an excellent piece for a flautist (or flutist for North American readers) to show his or her skills. The young Maria Cecilia Muñoz does not disappoint. On the contrary, even in the most difficult passages she remains firmly and expertly in command with her refined technique and opulent tone. The result is like an avalanche of happiness coming your way. She is aptly supported, or should I say ‘surrounded’ by the musicians of the Kammerorchester Basel.

Ars Produktion concedes that C.P.E’s relation with Mozart is more ambivalent, but in the liner notes a link is nonetheless established. Be that as it may, in the final analysis it’s the music that counts. Apart from a possible sales argument to include Mozart’s flute and harp concerto, the choice is justifiably befitting for the project. And it furthermore serves, once more, as an excellent spring-board for this Argentinian born flautist to show her qualities and make her way as a confirmed solo flute player.

She is teamed-up with the experienced Sarah O’Brien, for many years principle harpist with the Royal Concertgebouw Orchestra, and now, amongst other things, teaching in Basel, Switzerland. The two convey a feeling of complicity as though they have been working together for a long time as ‘sisters in arms’.

There is no shortage of recordings of Mozart’s flute & harp concerto, nor of talented flautists, like the Pahuds, the Galways and the Bezaly’s of this world. But Ms. Muñoz sparkling and catching play won me over immediately as someone to be reckoned with.

The Kammerorchester Basel, too, fits into the philosophy of Ars Produktion. With one or two exceptions -certainly from my perspective- they all are young and beyond any doubt very talented players, directed by Yuki Kasai from the first desk. Their support is exemplary and well balanced in the overall recorded soundstage, for which Ars Produktion ‘tonmeisters’ Schumacher&Rust need to be complimented.

The more than 40 (!) pages of liner notes are ‘très soignées’. The sound is first rate in any format, be it that there is a fair amount of surround. If you do not like that don’t sit too close to the rear speakers.

I rest my case.