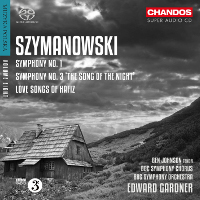 
Edward Gardner returns with the BBC Symphony Orchestra to the intoxicating orchestral music of Karol Szymanowski in their third disc devoted to the composer. Their previous releases have been widely praised, Gardner being described in BBC Music Magazine as ‘one of the finest non-Polish interpreters of Szymanowski.’ Ben Johnson, a tenor whose star is rapidly rising, joins Gardner and the BBC SO here as a soloist in two works.

Szymanowski’s Symphony No. 1 was composed in 1907 while he was still in his twenties. Stylistically it belongs to his early period, heavily influenced by the late-Romantic style of Wagner and Strauss. It was disavowed later in life as Szymanowski rejected his early influences but its brash youthful energy and intense emotion has won many audiences over.

The exquisite Love Songs of Hafiz for tenor soloist and orchestra are transitional works. Composed in 1911, they represent a move toward his middle period marked by a fascination with oriental themes, here reflected in the choice to set 14th Century Persian poetry.

Szymanowski’s Symphony No. 3 ‘Song of the Night’ is considered the apex of his middle-period output and one of his finest works. Scored for a huge orchestra with choir and tenor soloist, Szymanowski again sets Persian poetry, here celebrating the beauty of the starlight Eastern night. Szymanowski conveys the poem’s vision with sensuous and highly emotional music, scored in extraordinarily subtle orchestral colour.

This is the eighth release in Chandos's extensive survey of Polish music (Muzyka Polska) and the third SACD in the series devoted to the orchestral and vocal music of Karol Szymanowski. The two earlier releases Szymanowski: Symphonies 2 & 4 - Lortie / Gardner and Szymanowski: Stabat Mater, Harnasie - Gardner have garnered much well-deserved praise for the insightful conducting of Edward Gardner, the fine playing of the BBC Symphony Orchestra and the superb Chandos engineering. In every one of those essential aspects this latest recording matches the previous issues.

Szymanowski's Symphony No. 3 'The Song of the Night', completed in 1914, is a setting of the poem by the 13th century Persian poet, Jalal al-Din al- Rumi in a translation by Tadeusz Micinski. It has received some notable recordings over recent years of which those by Simon Rattle (CD only) and Antoni Wit, whose compelling version is available on a Blu-ray audio disc Szymanowski: Symphonies 3 & 4 - Wit , deserve particular consideration from collectors.
Overall Gardner's tempi are closer to those of Wit than Rattle and he captures the perfumed sensuousness of the music to perfection. The young British tenor Ben Johnson copes well with the high tessitura of his solos, even if he does not quite match Ryszard Minkiewicz's more idiomatic singing for Wit. Both the BBC Symphony Chorus and Orchestra could hardly be more committed in their collective response to Gardner's detailed and glowing account of Szymanowski's rhapsodic and ecstatic masterpiece, and the Chandos 24-bit / 96kHz recording is absolutely outstanding. It has a huge dynamic range that brings an almost holographic realisation to the listener of the spacious acoustic of the Fairfield Halls, Croydon where it was recorded in February 2014.

The venue for the recording of the 'Love Songs of Hafiz' was the BBC Maida Vale Studio 1 whose clear acoustic seems perfect for experiencing the beauty of Szymanowski's glittering orchestral palette and Ben Johnson's sensitive singing of these eight songs. The texts are by the 14th Century poet Shams al-Din Muhammad, better known as Hafiz, translated into German by the poet Hans Bethge. The first three songs are from an earlier cycle for voice and piano of the same title to which were then added five more to produce the version heard here that received its first performance in Warsaw 1922 as an accompaniment to a ballet. Each one is exquisitely orchestrated in the composer's oriental style from that period in his creative development and the recording captures every delicate detail with utmost clarity and warmth.

It is sometimes difficult to know what to make of Szymanowski's 1st Symphony. It was the young composer's first foray into the genre and was originally intended as a three-movement work, but a planned central Adagio never materialised. The two remaining movements are both densely scored and written in highly chromatic harmonic language. The music of this symphony verges at times on hysteria though it is interspersed with more lyrical passages. Edward Gardner's cohesive performance of this symphony holds the work together better than any previous versions that I have encountered, and by adopting a less frenetic approach than Valery Gergiev's recent account on LSO Live, makes a good case for a work rarely heard in the concert hall. The fine acoustic of the recording venue – this time the Watford Colosseum – plays an important part in keeping textures clear.

This SACD is another marvellous addition to the growing discography of this fascinating composer's oeuvre. 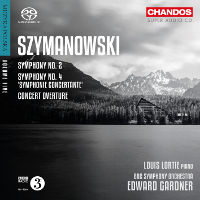 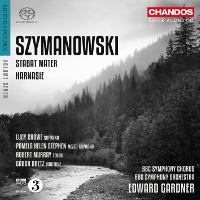 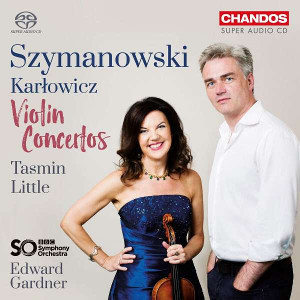