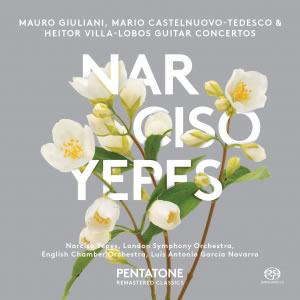 
The seeds were planted in the early 1970s when Deutsche Grammophon realised what amazing results could be achieved by recording the multi-channel tapes, with either four or eight channels. Yet, due to a few restrictions, they never fully blossomed. Flaws in the playback equipment meant that music connoisseurs were prevented from enjoying these recordings in the way that artists, producers, engineers and other professionals intended, even though recording technology was already way ahead of its time.

Now – over a quarter of a century later – thanks to the arrival of the multi-channel Super Audio CD, there is finally a system available which permits these precious recordings to be released in the quality they already deserved back then.

This release is a delicious offering of Villa-Lobos’ clear and expressive works, unique pieces reflecting the transitional period between the Classic and the Romantic of Giuliani, bound together with the melodious and lush works of Castelnuovo-Tedesco. How mind-blowing it is to be able to enjoy the compositions from one of the most underrated guitar maestros of all time next to the creations of one of the leading guitar virtuosi of the early 19th century, tied up together with the works of one of the most fascinating modern composers — all in one recording.

Now on SACD, you get to indulge in the Mauro Giuliani, Mario Castelnuovo-Tedesco, Heitor Villa-Lobos: Guitar concertos in the intended sound quality as when they were recorded.

With warm and open sound, Narciso Yepes with the English Chamber Orchestra and the London Symphony Orchestra provide beautiful performances of these enjoyable guitar concertos.

Narciso Yepes (1927-1997) was one of the legendary pioneers of the Classical Guitar, alongside Segovia, who was the first one to approach many of the great composers to write for the instrument. Yepes introduced his 10-string version of the insturment in 1964, performing the Concierto de Aranjuez with the Berlin Philharmonic Orchestra. He helped develop the 10-string guitar in collaboration with the renowned guitar maker José Ramírez III.

The purpose for the this instrument was the addition of string resonators tuned to C, A#, G#, F#, which resulted in the first guitar with truly chromatic string resonance – similar to that of the piano with its sustain/pedal mechanism.

Narico Yepes is my personal favorite of all the Classical Guitarists and this certainly biases me in favor of this disc. Regardless of which guitarist you prefer these are beautiful works by Giulaini, Castelnuovo-Tedesco and finishing off the disc with the famous Heito Villa-Lobos concerto.

These are intimate performances and the recording catches Yepes guitar beautifully, full of deep resonant tones and plenty of nuance. I particularly appreciate Yepes sense of sonority and color. His vibrato is very pleasing.

A wonderful disc for relaxing and featuring the virtuosity of maestro Narciso Yepes, there is a great partnership between Navarro and Yepes with orchestras featured here.

The recording doesn't really show any sign of age, with plenty of depth, a wide, open acoustic. Listen for the strings and wind performances in these recordings. Full of lush and relaxing sounds. This is a great disc for relaxing and forgetting your troubles.

Very highly recommended surround sound on this classic recording and it's great that this one has been taken out of mothballs, so to speak. I personally hope that Pentatone will release the quad recording listed in the booklet of Yepes performing the Concierto de Aranjuez and other works by Rodrigo on SACD.

With this great disc and another Yepes disc on the way Narico Yepes finally gets a first SACD release. Something for fans of this famous maestro to celebreate!

(This review refers to the Multi-channel portion of this disc)