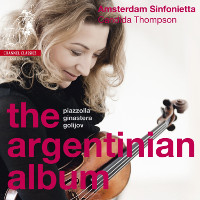 
I can’t imagine a more diverse palette of sounds, styles and colours than the three composers on this recording. They are unmistakably Argentinian yet tantalisingly different. Between them they represent the vibrant fusion of cultures that exist in Argentina today. In order to give full justice to their music, we researched their personal tastes, sources and sound worlds, looking for the influences that shaped them.

Although one immediately feels that Ginastera’s unique masterpiece Concerto per corde is written in a language close to the European masterworks of the twentieth century such as Bartók’s Divertimento, or Berg’s Lyric Suite, it’s a very particular and original work. Ginastera changes between such imaginative quasi improvised solo sections and very precisely structured passages. While playing his Concerto one has a tremendous feeling of freedom within structure.

Piazzolla's 'Cuatro Estaciónes Porteñas', also known as the 'Four Seasons of Buenos Aires', are a set of four tango based compositions written between 1965 and 1970 that were originally envisaged as separate compositions rather than one suite. The composer's potent blend of Argentinan tango, jazz and classical music has immediate appeal, and the work has received a number of recordings in recent years. In fact, it has already appeared from Channel Classics on Rick Stotijn's album 'Basso Bailando' Basso Bailando - Rick Stotijn in an arrangement by Marijn van Prooijen, but here it is presented in the more familiar arrangement made in the 1990s by Leonid Desyatnikov that links it to Vivaldi's 'Four Seasons' by inclusion of both playful quotes from that ubiquitous work as well as elements of the baroque concerto grosso. Candida Thomson and her marvellous players bring a heady mixture of sultriness, visceral excitement and panache to these exciting pieces.

For a number of years Piazzolla studied with Alberto Ginastera – following his introduction in 1941 to the slightly older contemporary composer by the pianist Arthur Rubinstein (not Anton Rubinstein as stated in the liner notes by Willem de Bordes). Ginastera is probably best known for his exciting ballet scores 'Estancia' and 'Panambi', but his impressive 'Concerto for String Orchestra' dating from 1965 and based on his earlier 2nd String Quartet is a wonderful addition to the SACD catalogue, particularly when performed with such fierce commitment as here.

The opening movement is a set of variations on a theme whose sinuous melody is ruminated on by each of the string section principals and interrupted by violent outbursts from the main string body.
An aptly titled 'Scherzo fantastico' that follows includes all manner of intriguing instrumental effects and considerable challenges for the players throughout its brief and ghostly span. An intense and disquieting slow movement highlights the sensitivity and unanimity displayed by these performers, while the 'Finale Furioso', that begins like a swarm of angry bees, demonstrates their amazing virtuosity.

'Last Round',Osvaldo Golijov's tribute to Piazzolla, is a nonet written for a double string quartet and double bass. The composer's own account of the form and genesis of this deeply felt 14 minute piece describes it perfectly.

“The title is borrowed from a short story on boxing by Julio Cortázar, the metaphor for an imaginary chance for Piazzolla's spirit to fight one more time (he used to get into fistfights throughout his life). The piece is conceived as an idealized bandoneon. The first movement represents the act of a violent compression of the instrument and the second a final, seemingly endless opening sigh (it is actually a fantasy over the refrain of the song 'My Beloved Buenos Aires', composed by the legendary Carlos Gardel in the 1930's). But 'Last Round' is also a sublimated tango dance. Two quartets confront each other, separated by the focal bass, with violins and violas standing up as in the traditional tango orchestras. The bows fly in the air as inverted legs in criss-crossed choreography, always attracting and repelling each other, always in danger of clashing, always avoiding it with the immutability that can only be acquired by transforming hot passion into pure pattern."

The Piazzolla and Golijov pieces were recorded in April 2014 in the Stadsgehoorzaaal, Leiden while the recording of the Ginastera 'Concerto for Strings' took place in the Bachzaal, Amsterdam some six years earlier. Irrespective of location, the sound quality of Jared Sacks's 5.0 DSD production is all that one could wish for. There is an almost holographic realism to it that does full justice both to the music, the artistry of Candida Thomson and the musicians of the Amsterdam Sinfonietta. 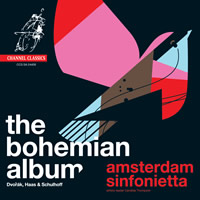 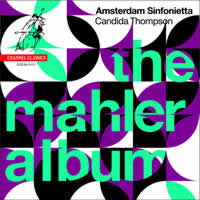