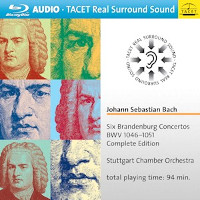 TACET's unique recordings of Bach's Brandenburg Concertos by the Stuttgart Chamber Orchestra have already been released on SACD as a two-disc set and reviewed favourably back in September 2005 by my colleague John Broggio Bach: Brandenburg Concertos 1-6 - Stuttgarter Kammerorchester. The re-release of all six concertos on a single Blu-ray audio disc with a playing time of 94' 39” minutes will be a tempting prospect for those who admire TACET's philosophy of placing the listener at the centre of the performance and utilising the full capabilities of multi-channel sound.

These Stuttgart performances were originally recorded in 2000 and first issued, I believe, in the now virtually defunct DVD-A format disc before release on SACD and now Blu-ray audio. Choice between multi-channel (default) and stereo layers is made using respectively the red or yellow buttons on the player's remote control. Though the information on the disc case states 'TACET Real Surround 5.1' it is in fact 4.1 as there is no use of the centre channel. The recordings were made in the small baroque church in the village of Gönningen in Baden-Wurttemberg whose clear acoustic suits these works perfectly.

Five different instrumental layouts are used (see the review referred to above) and the benefit each of these bring to the clarity of Bach's contrapuntal writing is immense. The ear can focus on individual instrumental lines with ease while at the same time the overall body of sound remains coherent.

These accounts of the Brandenburgs from the superb Stuttgart Chamber Orchestra are unfailingly excellent. They perform on modern instruments, but with the addition of a harpsichord engagingly played by Robert Aldwinckle. These are in no way 'old-fashioned' – tempi are brisk but not frenetic, and the various members of the orchestra communicate a sense of absolute technical confidence and refinement of tone Some will miss the bright sound of recorders in the 4th Concerto but the crisp and beautifully articulated playing of the two flautists, Natalie Schwaabe and Andreas Schmidt, is a delight.

There are countless versions of these joyous masterpieces on record – performed in widely different interpretative styles and utilising varying degrees of scholarship – to suit every taste. Those, however, who are unconvinced by the sounds of some of the more adrenalin-fuelled, wiry and acidulous sounding period groups in these works – where all too often displays of virtuosity take precedence over more lasting musical values – should find this disc a most refreshing alternative. 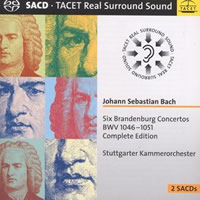