Brass Too: Brass of the Royal Concertgebouw Orchestra 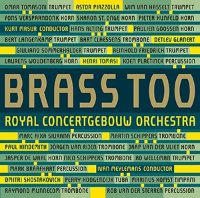 
After the success of Brass (RCO 07002), the first cd of the Brass of the Royal Concertgebouw Orchestra, musicians and audience felt the need for a proper successor. Now, seven years later, RCO Live presents Brass Too. The pun in the title also points to the idea behind this album: the works of Shostakovich and Piazzolla for instance were originally not written for brass, but in these arrangements they sound lovely, too. And although Hindemith is not known as a composer of brass music he has written for this family of instruments, too. The new work by the RCO's house composer Detlev Glanert proves that brass can sound completely different, too. This album is full of surprises!

The success of RCO Live's first disc featuring RCO's brilliant brass players (Brass of the Royal Concertgebouw Orchestra) gathered requests for a follow-up, and here it is, complete with the punning title "Brass Too", as not all the pieces were initially composed for brass. The programme is as adventurous as that of the first disc, and was collected from sessions at the Concertgebouw Amsterdam in 2011, 2013 and 2014. The conductor for tracks 1-12 is Ivan Meylemans, a principal trombonist first at the Belgium Philharmonic and then at the RCO. He studied to be a conductor in parallel with his playing, then in 2007 he relinquished his trombonist post and took up conducting full time.

Shostokovich's The Gadfly Op. 97 is a film score from 1955, its film based on a popular novel in the Soviet Union, written by the Irish Ethel Lillian Boole, married to a Russian. It includes an affecting Romance, considered to be the composer's "greatest hit". Steven Verhaert has arranged some of the film music into a suite for brass, and naturally had to include the beautifully played intense Romance, alongside a noble Overture, amusing Barrel Organ Waltz, breathless Galop and a sardonic Finale which is foreboding and mechanical.

Detlev Glanert (b1960) is one of three in-house composers of the RCO. He wrote a short work for 12 brass players and percussion entitled Concertgeblaas (another pun?) or 'Concert Blareing'. The blaring consists of some challenging, initially shrill discords which proceed almost immediately into a merry little dance, the players using different kinds of mutes. Towards the end the composer also indulged in some Jazz sleaze.

The longest piece in the programme is by Henri Tomasi (1901-1971), a Corsican pianist with an affinity for wind instruments. His radio play 'Miguel Maraña' was turned into an opera, and Tomasi extracted four Liturgical Fanfares from Act 2. This is deeply felt music, since Tomasi's story, based on the Don Jan legend, was a parallel of his own life, ultimately driving him too towards religion. Each movement sets off a variety of fanfares, and also alludes to religious music such as the Gregorian 'Credo'. The Scherzo is entitled 'Apocalypse' and luridly deconstructs its fanfares, while the lengthy finaleis based on the Good Friday procession. A tuba subtly spawns the 'Dies Irae' from its depths, and the fanfare material above gradually reaches a huge crescendo signifying Miguel's religious epiphany.

Astor Piazolla (1921-1992) was not normally associated with brass bands, but arranger Steven Verhelst made the trombone, being the most lyrical of the brass and capable of a wide colour range be the principal instrument. Similarly, two trumpets, both with and without sneering mutes, could replace the bandoneon of Piazolla's music. Piazolla's tango opera Maria de Buenos Aires was the source of the selected two pieces, the last being a fiendishly difficult 'Fuga y misterio'. A "tango fugue" is an amazing thing to hear, especially when played with such technical expertise and easy rhythm.

For the final track, Hindemith's Konzertmusik Op. 50 for brass and strings acquires Kurt Masur for its conductor. Originally, it was composed for the 50th Anniversary of the Boston Symphony Orchestra, where it was much admired by Koussevitsky. It is a challenging piece for players as well as audiences, but comes from well after Hindemith's period as an infant terrible in the 1920s. The rich sonorities of the massed RCO strings sounds wonderful, penetrated or supported by the well-written brass parts, which at times seem to be giving homage to Gershwin.

All the recordings were made in the famous Concertgebouw hall, and all have a similar amount of support from its helpful resonance. The 88.2/24 captures as much detail as one could wish of the brass instrument's timbres, and the stage positioning of each group or soloist is equally precise.

An attractive and unique programme of music for brass played by superb musicians, which will be of interest to musicians and brass band fanciers alike. 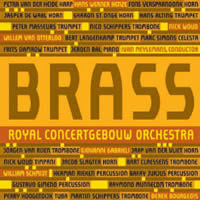