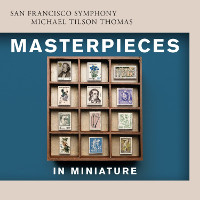 
This exquisite new recording from the Grammy award-winning partnership of Michael Tilson Thomas and the San Francisco Symphony is proof that good things come in small packages. Discover charming, wistful, and even haunting timbres in music by some of the world’s favorite composers, as MTT shares his most personal musical memories with you. With an electrifying performance by virtuoso pianist Yuja Wang, Masterpieces in Miniature is a must-have collection of brief but brilliant pieces that will delight casual listeners and aficionados alike.

The release of 'Masterpieces in Miniature' celebrates Michael Tilson Thomas's 20th season with the San Francisco Symphony, a partnership that over the years has yielded so many fine recordings.
The twelve pieces on this disc are, for the most part, what Sir Thomas Beecham would have called 'Lollipops'; short encores played at the end of concerts of music that usually contrasts in mood with what has been heard earlier and are designed to send the audience home in a contented frame of mind.

The majority of the works featured here are timeless classics – melodic and for the most part undemanding for the listener who can simply sit back and enjoy the superb orchestral playing delivered in state-of-the-art sound. All were recorded live but there is no audience noise and the justifiably enthusiastic applause only erupts after the final item – a swaggering account of the 'Cortège de Bacchus' from Delibes's ballet 'Sylvia'.

The first item, the sparkling Scherzo from Henry Litolff's 'Concerto Symphonique No.4', receives a brilliant performance from the charismatic young pianist Yuja Wang who has made very regular appearances with the SFS since her début with them back in 2006. The delicacy and precision of her playing is matched by the orchestra's alert accompaniment.

This is followed by Mahler's 'Blumine', a lovely piece that was originally intended as the second movement of the composer's 1st Symphony but was removed by him in the wake of adverse criticism. Those who have some or all of Michael Tilson Thomas's superb cycle of Mahler Symphonies and works for voice, chorus and orchestra on this label will be delighted to have this addendum to them. It receives a deeply felt and affectionate performance in which the orchestra's Principal Trumpet Mark Inouye deserves special kudos for the sensitivity and elegance of his trumpet solos.

In the wake of a beautifully poised and cool account of Faure's 'Pavane' we have something of a rarity – Debussy's own orchestration of 'La Plus que lente' a piano waltz that he composed in 1910. Two years later, possibly influenced by the sounds of the gypsy café ensembles that he heard in the Hungarian capital, Debussy orchestrated the piece for flute, clarinet, piano, strings and the exotic cimbalom. It is a captivating piece delivered with style and appropriate languid nonchalance.

The inclusion on this disc of 'The Alcotts' movement from the Ives/Brant 'A Concord Symphony' was an excellent idea. This track is taken from an earlier release on the SFS label Ives/Brandt, Copland - Michael Tilson Thomas and this excerpt should help to bring this iconoclastic work to a wider audience.

Little comment is needed about the Schubert, Rachmaninoff, Dvorak, Sibelius and Grieg items each of which receive polished renditions from this superb orchestra, but mention must be made of Michael Tilson Thomas's enthralling account of Delius's 'On Hearing the First Cuckoo in Spring' that suggests a Delian of some stature.

It is perhaps worth mentioning that clips from all twelve pieces can be auditioned at http://www.youtube.com/user/sfsymphony.

Thanks to the fine acoustic of the Davies Symphony Hall, the sound quality is all one could wish for – rich and detailed and clean. Tracks 1-5 and 7-12 were recorded in September 2013 and May 2014 (PCM 192kHz / 24-bit) and Track 6 is taken from the Ives/Brant recording referred to above recorded in February 2010 (96kHz / 24-bit). Multi-channel listeners will find that the use of the centre channel is quite discreet on all the tracks recorded in 2013 and 2014. This does not, however, in any way affect one's enjoyment of this most recommendable SACD.