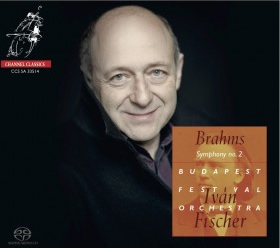 
A remarkable, transparent purity can be heard in Brahms’s Second symphony. It is a sharp contrast to the huge arsenal of ideas collected in the First Symphony, which Brahms had worked on for many years. Here in his Second he shows us his masterful skill in developing large-scale architecture from the simplest motifs. To give the first of these to the horns is a logical choice; Brahms always used natural horns and resisted the more modern instruments. Horns can ideally explore the purest of all musical ideas: the journey through the overtones.

Similar purity is present in all the themes. When at the start the basses step down a semitone and step back again, nobody could guess what a rich new world would develop from this cell. The last movement is also built on a simple tool: repeated, equal notes follow each other in regimental order (a classical tradition often heard in final movements by Haydn or Mozart). Is this Brahms’s most nature-related symphony? Considering the complicated organisms that develop from the simplest cells, yes, it is. Brahms certainly has the divine, creative talent to show us how this process can work in music.

The photograph of a smiling Ivan Fisher presented on the cover of this SACD suggests a knowing prescience of the glorious performances of the three Brahms works that are recorded on this disc.

This is the second release in Ivan Fischer's gradually emerging cycle of the Brahms Symphonies with his Budapest Festival Orchestra and is, in every respect, as outstanding as the first Brahms: Symphony No. 1 - Fischer.

That the Budapest Festival Orchestra is in superlative form here is clear from the opening of the work where the lithe strings float in over a cushion of warm horns and beautifully blended winds. Timpani are notably clear even in the softest passages and Fischer makes the exposition repeat in the first movement – essential for the work's overall shape and generally adopted more these days from conductors than it was in the past.

Fischer's interpretation is free of mannerisms that could in any way sour a single bar of what is arguably Brahms's most beautiful symphony. Tempi throughout all four movements of the symphony are beautifully judged. The pace is relaxed, but always with an underlying forward moving pulse and the conductor's subtle nuances within his set tempi are natural and unforced.
That said, Fischer is not afraid to use a modicum of rubato where appropriate and the portamento he applies at the end of the first movement's coda after an exquisitely phrased horn solo, seems just perfect to my ears. What perhaps is most remarkable about this reading is the sense that, as with so many recordings by Ivan Fischer, he has approached this symphony as if it was a new discovery for him.

Brahms's two contrasting Overtures make ideal fill-ups to the Symphony and they are both given performances that are equally outstanding. The Tragic Overture receives a fiery and cogent reading – taut, dramatic, expansive and entirely free of bathos. The Academic Festival Overture, built on themes taken from student songs and incidentally Brahms's most heavily orchestrated work is played with gruff humour – the “Fuchs-Lied - Was kommt da von der Höh?” wittily played by rustic sounding bassoons. Fischer builds up the excitement gradually, and at the final statement of the student song 'Gaudeamus igitur' triangle cymbals ring out thrillingly underpinned by a firm bass drum.

It is hardly necessary to say that the sound quality of this multi-channel 5.0 DSD recording is exemplary. It combines warmth and exceptional instrumental clarity in a remarkable way aided, of course, by the fine acoustic of the venue – the Palace of Arts, Budapest. The ambience provided by the surround channels is ample but not excessive.

In short, this is a disc with impressive performances so thoroughly prepared, expertly executed and superbly recorded that one could not reasonably ask for more. 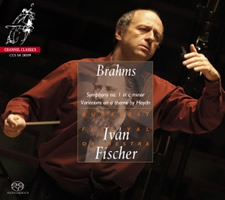 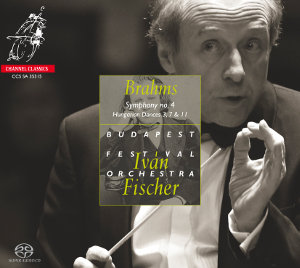