Something New: Norwegian works for male chorus from the last 20 years - Skjølaas 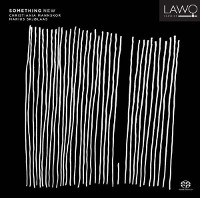 
This new release by Christiania Mannskor is history s first CD recording of new Norwegian music for male choir! The works on the CD were written over the last 40 years, and reflect the desire of Christiania Mannskor to renew the male choir repertoire and make it more accessible for more singers. The recording presents music spanning a broad range: from melodious Gregorian-inspired hymns to more modern, instrumental means of expression. Christiania Mannskor was founded in 2009, and comprises both professional and semi-professional singers under the leadership of conductor Marius Skjølaas. In close association with the country s leading composers, the group is spearheading the effort to revitalize the male choir tradition in Norway.

Our guide through this inspiring collection of contemporary male voice choral works from Norway is Wolfgang Plagge, born in Oslo (1960) of Dutch parents. In the disc's booklet, he first gives a philosophical view of the need to produce something new in artistic creativity, and then insightfully surveys the innovations of the selected composers for this programme by the Christiania Male Voice Choir (Mannskor). An internationally respected pianist and composer himself, he introduces his own 'Natten sanger' (Night Songs) which Christiana Mannskor commissioned from him and premièred in 2012.

Apart from Knut Nystedt (b.1959), regarded as the grand old man of C20th music in Norway, most of the composers here will be little known outside the country. Fear not, the general harmonic idiom is tonal, and even modern harmonies caress the ears rather than being aggressive. The choir was founded in 2009 by its conductor Marius Skjølaas and the mix of 24 professional and semi-professional members aims to revive the tradition of the male chorus in Norway, making it more easily accessible. It also seems to be gaining the role of a National choir, from its Government invitation to sing at a Nobel Peace Prize Dinner and other invitations by Parliament. Lawo's 'Something New' is the choir's first recording of four planned SA-CDs.

Under the intuitive direction of Skjølaas, the choir meets all the characteristics which Plagge attributes to a Norwegian choral tradition - full-sounding, modal and jubilant, demonstrated superbly by Carl-Andreas Næss' Veldig Reiser Landet Seg (Mighty this land rises), where the deep basses in the choir have a field day, as do the tenors with their burnished ardour. The choir has a greater number of soloists than most, and this adds individual characters with their definitive voices, providing extra emotional involvement in the poetic texts.

The magnificent sound of Christiania Mannskor is partly due to the friendly acoustics of Ris Church in Oslo, a favourite venue for Norwegian recording engineers. The microphones provide a reasonably close image of the singers in Stereo so that details are not lost, lightly invested with the halo of reverberance from the church, but with 5.0 Multichannel, the venue opens up breathtakingly, with the music enveloping the listener realistically.

Something new? Undoubtedly, yet the composers still base their work on many well-known historical styles, giving the listeners the accessibility for which they are seeking. Yet the profundity (or amusement) which the poets ignite in the music is still transmitted. I give Plagge the last words: "no matter what we humans think and feel about equality and evenness, every thing in us, with us, and around us is in constant flux".

An exemplary choral programme which should not be missed. I can't wait for the next volume in this series