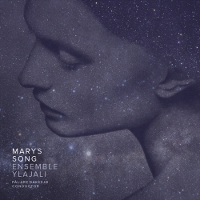 
Ensemble Ylajali s new CD Mary s Song presents a selection of contemporary Norwegian a cappella settings of Marian texts. Mary is without a doubt the most influential female figure in sacred music, a fact that inspired the ensemble's decision to make a recording of music devoted to her. Mary has secured the place of women in an otherwise male-dominated part of history; recent research and political currents have revealed further sides of Mary as a historical figure, both in the arts and in academia, making her a fascinating figure for women today.

A lovely, lovely recording. Despite its unusually short Total Time of only 49:17 it will bring serenity and joy in equal measure to any listener of the Norwegian female 'a cappella' Ensemble Ylajali. I haven't heard them before and am very impressed. They number 10 Sopranos and 12 Altos, with some of the Altos being able to take quite deep notes in the tenor range, like those in Vivaldi's all-female choirs of the Venice Ospedale. Ylajali were founded during 2008 in Bodø, second largest city in Norway north of the Arctic Circle and already have extensive concert activity. They set themselves to the highest standards, as clear from their beautiful vocal blending, expressivity and confidence. Their Conductor and Musical Director is Pål-Are Bakksjø, a singer himself and much in demand for working with choirs in Norway. In case you are wondering, the Ensemble's name Ylajali was taken from Norwegian author Knut Hamsun's novel 'Hunger', in which the main character longs for the woman of his dreams, Ylajali.

The recording sessions took place in Røsvik Church, a compact building from 1883 which offers a most flattering ambience for the choir. Both stereo and 5.0 tracks capture their artistry with breath-taking clarity. The venue is also in the Nordland north of the Arctic Circle, and it is very encouraging to see Lawo Music working in other regions a long way from the environs of Norway's capital. Incidentally, I have noted that in this issue, as in some others from Lawo's stable, the information that this can play in 5.0 Multichannel is found only in minute text at the bottom right of the back cover - as if the company is not proud of its full SA-CD's specifications!

Solo singer and composer Frank Havrøy (b.1969) was the Producer of this disc. He specialises in contemporary music, so the choir's pieces chosen to illuminate the female aspects of the Virgin Mary span late C20th to 2013. There are four of his own sacred motets for women's choir in the programme, interspersed with others by the Basque Javier Busto and Canadian Ramona Luengen. It is particularly interesting to hear three versions of 'Salve Regina' in succession, showing different ways of tackling the ancient text. The only non-liturgical piece deals with Mary in a different way. Knut Nystead (died 8 December 2014 at the age of 99) was one of Norway's best known composers, and he set a poem by Luci Shaw which became 'Mary's Song', the disc's title. This is an emancipated woman's view of the Annunciation; Mary is given a voice, in which she expresses deep trouble over the future of the helpless Saviour left in her womb. There are some truly soulful solos in this unusual and revealing Song.

Although several of the Motets have brief Plainchant extracts in their setting, the harmonies which are used tend to be varieties of tone clusters (at least three adjacent notes in a chord). This dissonance doesn't affect the lyrical beauty of the main melody, and it gives a shimmering, vibrant and often radiant tone to the score. We have come to expect its presence these days, a "fashion" for choral composers following the great world-wide success of 'O Magnum Mysterium' by Morten Lauridsen. The present programme opens with O Magnum Mysterium itself, the indelible mark of Christmas, by Frank Havrøy, with its opening words in a series of swelling tone clusters separated with silences, which develop the atmosphere of its mystery very effectively.

Presentation is attractive, a gate-fold DigiPak in a monotone dark violet with striking long-exposure celestial star photographs. The booklet is detachable and has a splendid centre page photo of the Ensemble. Latin texts have Norwegian and English translations and there is just the right amount of biography information.

This collection of modern Mary's songs is probably unique and it is certainly very well balanced; I suspect that adding a few extra out-of-context pieces just to make up to, say, a 60 min programme would probably upset the varying musical and emotional qualities of Havrøy and Bakksjø's plan.

The Ensemble Ylajali invests much inwardness and meaning into their songs, with sure tone and effortless-seeming technical mastery; hopefully Lawo will go up North again to capture some more of their repertoire. Added to the beautifully atmospheric recording of Mary's Song, I heartedly urge collectors of choral music to pick up a copy.