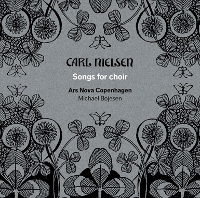 
“It is strange that when I write these simple melodies, it is as if I am not the composer – it is people from my childhood or the Danish people who want something through me.” Thus said Carl Nielsen (1865-1931), who was devoted to renewing the Danish song tradition and whose melodies are still at the heart of Danish community song today. On this recording, Ars Nova Copenhagen presents a selection of Nielsen’s most popular songs under conductor Michael Bojesen.

Having released an excellent album of Carl Nielsen's Danish Folksongs ( The Golden Age of Danish Partsongs - Hillier) Dacapo now turns to his Choir Songs. Nielsen wrote almost 300 songs, and apart for a few in classical format, the majority are simple popular songs, specifically for the Danish tradition of Community Singins. Paradoxily, the majority of Danes know Nielsen for his songs, rather than his concertos, symphonies and stage works.

Nielsen grew up in an era characterized by nation building, when Danish culture and language was celebrated in art, literature and music. Everyone's pride in sharing this modernity arose wherever Danes met together. The communal singing arising then played an important role in expressing pride in the homeland, not least at the numerous Folk High Schools, which flourished in the last half of the 19th Century. In 1922 Carl Nielsen and three other composers were put in charge of collecting and writing melodies for the songbook that was used then at the Folk High Schools, “Højskolesangbogen”. Today, several revised editions later; Nielsen is still the composer with the highest number of compositions in the songbook, having penned 35 of its melodies.

Most of the songs are scored as simple, straightforward strophic tunes (same tune for each verse) above a simple piano accompaniment; not folk songs but 'songs for all'. They can be sung in unison 'a cappella' or with the piano; however, Nielsen recognised that choral versions were in demand for occasions of greater importance and three of his own arrangements are on this disc. The rest are new arrangements for four voices by the conductor Michael Bojesen, based on the original piano parts from the Folk High School Melody Book.

Singing with deeply fervent pride, the sound of the twelve singers of Ars Nova Copenhagen is immediately recognisable for its tone, clarity, balance and expressiveness, and they treat these simple songs as if they were some of Nielsen's greatest masterpieces. Their collection of songs includes those celebrating the Seasons, especially Spring, the beauty of the Danish landscapes, the nature of the Baltic sea surrounding the scattered Danish islands, some religious commentaries and then moves on to more political and social issues. Nielsen himself was was amazed that the overwhelming success in 1907 of a socially indignant song 'Jens Vejemond' (Track 17) got more attention than all of his serious works, even hitting the Hit Parade of the time! Ironically, he used some of his choral song melodies, or part thereof, in his major works, such as the Wind Quintet and the last movement of Symphony 3, Clarinet concerto and Symphony 6 have song fragments. Thus were the two important media of his career neatly cohabited.

Ars Nova of course sing in Danish, with marvellous articulation and diction of every subtle detail of their tricky language, but there is an English translation of all the songs in the booklet. Some of the poetic texts have archaic language, and also there are conceptual words in Danish which have no equivalents in English. Generously, the English translation does not just give as close a translation as possible, but seeks to do so in a singing version, with the same pattern of rhymes and rhythms in the verses. This is a formidably difficult (or impossible) task to complete (sometimes because of the oddities of the English language), and on the whole the translation works quite well, if necessarily being rather clumsy at times. There are some intriguing oddities; for example:-

"Hamm'ring hard at stems, the sea
Meets with Denmark's name alee"
("Alee" is probably known only by elderly sailors, as it means "upon or toward the lee side of a vessel").

Another, less puzzling, couplet is:
"Not a crutchy cripple fleeing,
Not a creature, idle-willed"
(At least "crutchy cripple" is self-explanatory, but I wonder if a choir singing this in English might dissolve in laughter at that point.)

Recording producer and sound engineer Preben Iwan gives us his usually excellent recording, here captured in the Old Church of Our Lady in Roskilde. It is, however, immediately obvious that the choir are in a church, which kept me thinking that these community songs were more like hymns than they would sound in practice - say at a school or a family sitting outdoors, around table, replete after a meal and several bottles of wine.

Collectors of Carl Nielsen's music will undoubtedly acquire this fine disc, as likely would choral afficionados. For Danes it would be ideal for brushing up choral songs from experts, even though community singing appears to be declining at the moment, while four-voice ensembles are taking over and looking for new versions of Nielsen's songs. Recommended.