Bread: The Best of Bread 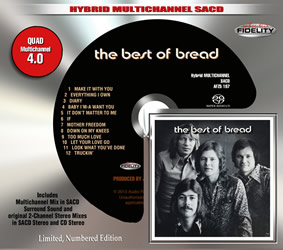 
This 1973 "The Best of Bread" recording is a great collection of music from Bread, the popular 1970's band best known for their mellow, smooth, melodic and often mournful tunes. Many of the classic Bread tunes included in this set live on through soft rock stations everywhere.

Lead singer David Gates crooned his way into America's heart, and starting with "Make It With You" quickly spun off hits like "Everything I Own," "Diary," "Baby I'm A Want You," "It Don't Matter To Me" and "If". This album covers all the early hits and more delivered with a deceptively breezy tone by one of pop's purest vocalists. At times, their songs had a more upbeat feel as with "Mother Freedom," but they always retain that same soothing blend of soulful lyrics and gentle music.

"The Best of Bread" is somewhat of a musical enigma for me. In 1973, I purchased the LP for the sole purpose of listening to these great hit singles. I listened repeatedly to Side 1 consisting of 6 outstanding ballads all written by David Gates that were well crafted with beautiful arrangements; Side 2, on the other hand, had 5 tracks of uptempo numbers that I would term as competent or average (plus another fine ballad "Look What You've Done" written by James Griffin & Robb Royer). Maybe super fans of Bread really enjoy some of the faster tempo songs but most listeners (and that includes me) likely identify with the wonderful ballads. So my main attraction to this album in SACD was the opportunity to hear Bread's music in Quadraphonic 4.0. The review focuses exclusively on the multi-channel mix.

I consider it appropriate to use the word 'stunning' to describe the Quad 4.0 mix. My first reaction was the quadraphonic tapes must have been in exceptional condition after 40 years. As per the liner notes, Gus Skinas did the 4.0 analog to high definition DSD digital transfer; what a masterful job! You have 4 discreet channels and I noticed something immediately from the opening track: a coherent and well balanced sound where the instruments blend effortlessly without being obtrusive.

Absolutely everything sounds crystal clear and nothing seems buried in the mix. I feel a major part of the credit should go to the immaculate production and arrangements by David Gates. Before forming Bread with James Griffin, Gates was a session player with some previous production credits. He was also the sole songwriter for all the memorable ballads. In other words, David Gates, from my perspective, was the group member most responsible for the success of Bread. For the purposes of this SACD version, he provided the best music and high production values on the original recordings.

Needless to say, the audio is superb with this 'stunning' clarity and detail. It really has this 'in the studio' quality to the sound. You have the clear and vibrant tone of acoustic guitars and string sections. The vocals are crisp and thrilling on the ballads. And bass lovers take note: you have a tight bass with a deep but very rich quality..... plus you get this bass tastefully emitting from the rear speakers. Does it get any better in Quad 4.0?

A few additional comments about the music of Bread. I do have the 2 CD set of "Retrospective" from 1996 on Rhino Records. Bread did have more successful recordings after "The Best of Bread" original release in early 1973 and Retrospective contains several additional high charting singles (all ballads of course) with the first-rate "The Guitar Man", "Aubrey", "Sweet Surrender", "Lost Without Your Love" and "Goodbye Girl" (David Gates solo recording). And yes "Mother Freedom" did barely crack the Top 40 and it is Bread's best attempt at recording a rock song that is also included on "The Best of Bread". "Retrospective" has excellent audio with remastering by Bill Inglot and Geoff Sykes. So yes, I am a fan of Bread.

My performance rating for "The Best of Bread" was a little difficult but I came to a simple conclusion: 5 Stars for the great ballads and 3 Stars for the uptempo songs, i.e. 4 Star rating. The amazing sonics of the Quad 4.0 mix are a definitive 5 Stars. For this SACD, the album deserves the highest recommendation on the multi-channel sonics alone.

And finally, this SACD release was made possible by the record label Audio Fidelity who had the foresight to fill a gaping hole for multi-channel, rock/pop music with 4.0, high resolution audio. Far too many existing quadraphonic tapes have sat dormant in record company vaults for decades. Thank you Audio Fidelity.