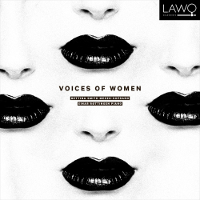 
Voices of Women is the second Cd release by the duo of mezzo-soprano Bettina Smith and pianist Einar Røttingen. The recording highlights women s voices in world literature: Goethe s female characters Mignon and Suleika, Shakespeare s Ophelia, and the gospel according to Mary Magdalene. The musicians have placed their focus on contemporary Norwegian music composed for voice and piano, and two of the works were written especially for them.

The striking and somewhat provocative artwork of this disc heralds its contents, highlighting women’s voices in world literature. Goethe’s female characters 'Mignon' and 'Suleika', Shakespeare’s 'Ophelia' from 'Hamlet' and the gnostic gospel according to Mary Magdalene provide material for mezzo-soprano Bettina Smith and pianist Einar Røttingen. Their composers are Fartein Valen (1887-1952), whose five works fall easily into the 'song' category, while works by contemporary composers Ketil Hvoslef (b. 1939) and Jostein Stalheim (b. 1960) were specially written for the duo, and at 21' and 16' respectively are closer to concert arias or opera scenes rather than Lieder.

Fartein Valen, born in Stavanger, studied in Berlin under Max Bruch, working on exercises in both tonal and atonal counterpoint, but he preferred motivic working and dissonance rather than harmonic progression. On his return to Norway he introduced many contemporary styles, which were not understood by his critics. Independently of the Second Viennese School, Valen continued to push back the frontiers of tonality until they ceased to exist for him.

In his '3 Poems by Goethe Op. 6', short works were set with "melodious dissonance" as Ricardo Odriozola describes it in his exemplary booklet notes. Colourful note sequences show how Valen respected the human voice and extracted the emotions from Goethe's texts. His piano accompaniment are open and often delicate. Valen's 'Mignon - 2 poems by Goethe Op. 7', in contrast, has a texture which is often rather thick, being originally conceived for orchestral accompaniment. Frequent octave doubling in the bass and treble lines occurs, and at times there are as many as seven different pitches being sounded simultaneously. The voice, rather than following melodious dissonance, does sudden leaps to very high pitches, and the piano part sounds alien to the vocal line. In 'So let me seem', the poem speaks of death in terms of resting in peace, then serenely going amongst celestial beings to be transfigured. Valen presents Goethe's subject musically as if it were a frenzied horror story instead.

As Odriolozoa's notes tell us, "Stalheim has extracted sections of Ophelia’s text from the fifth scene of act four of Shakespeare’s Hamlet. The Ophelia Scene is, thus, an abstraction, since, barring two brief interjections from the pianist (taking up words spoken by King Claudius and Ophelia’s brother Laertes) the words are only those spoken by Ophelia". We are left with neurotic ramblings of the grief-stricken Ophelia standing by themselves. Stalheim's setting goes far beyond singing, starting with Bettina Smith whispering over a piano part which brackets the voice with very deep and very high notes at once. The nightmarish vocal and piano parts include "sprechstimme", the soprano's machine-gun like speaking of individual letters, like "G-G-G-G-G", breaking up words in odd ways, repeating words at different tempi (not playfully), cat-like hissing, spitting out words and a number of other non-musical devices. Smith and Røttingen seem to have mastered these challenges masterfully, but I can't say that I enjoyed the result.

Hvoslev's 'From the Gospel of Mary Magdalene' takes a section of the gnostic Gospel where Mary refers to the teachings she received directly from Jesus. Not being an expert in interpreting religious texts, this one seemed fairly incomprehensible and obscure to me, and I wondered where the impulse to set it to music came from. Hvoslev's score contains a lot of repeating monotonous chanting in loops, often sounding ugly because of the intense dissonances. It certainly gave me no deep information about Magdalene's voice.

Betttina Smith and Einar Røttingen are highly regarded as international soloists and as a duo. On the evidence of their performances here, they also have a penchant for contemporary genres. The demands made on the singer by Stalheim and Hvoslev are considerable in their relatively long pieces. Asked to produce her voice in ways not occurring in 'bel canto', it feels at times that Bettina Smith's mezzo voice becomes somewhat fatigued with the leaps to high notes, resulting in a little discolouring of tone and slowing of vibrato.

The Sofienberg Church in Oslo provides a soft echo to the soprano's higher range, and the balance between piano and voice is quite natural. There is little difference between stereo and multichannel modes. Full page B/W photographs portray the performers, and I suspect that the greyscale graphics of lips, eyes and nose which decorate the rest of the booklet may well be Bettina's. Texts are in black printing, and English translations are in red."'Voices of Women" booklet fits into a pocket on the Digipak.

Lawo quite often produces playing times which are notably less than the industry norm; here it is 46:38, but since much of the music is not to my taste, I'm not requesting more!

Recommended to followers of the more alienating contemporary techniques of modern classical scenas.