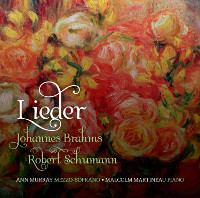 Songs by Brahms and Schumann


Brahms & Schumann: Lieder, Ann's first solo album in over a decade, will be her final Lieder recording and a fitting way to draw her long and distinguished recording career to a close. Still a regular fixture on the opera circuit, Ann's voice remains impressive. Following a Brahms recital at Wigmore Hall in 2014, The Times stated: ‘Her still-penetrating mezzo was the highlight of the evening. Murray really sings through Brahms's cantabile lines while losing nothing in theatrical awareness.'

World famous Irish mezzo-soprano Dame Ann Murray retired from the Concert Hall in 2011, and now (2013) she brings her long list of Lieder recordings to an end by returning to the studio after a decade. She has compiled a fine farewell programme of her favourite Lieder for us, which is accompanied by Malcolm Martineu, a pianist who has played for her in many recitals. The recording also includes contributions by some of her friends and family who are musicians in their own right - Benjamin Appl (baritone), John Mark Ainsley (tenor), Johnny Langridge (tenor & Ann’s son) and Hester Dickson (piano & Malcolm’s mother).

The lives of Schumann and Brahms were interlocked in their careers and social life, with Schumann's wife Clara as a central pivot. Schumann learned a great deal on composing Lieder from Schubert, as did Brahms from Schumann. There are 26 tracks on this disc, and Dame Ann focusses on songs from after Schumann's Golden Year of Lieder (1840) - 19 tracks, with the rest a wide-span selection from Brahms' Lieder.

She chose two major groupings from Schumann; Lenau's 'Poems of Mary, Queen of Scots', Op. 135 and Goethe's Lieder and songs from 'Wilhelm Meister', Op. 98a. Nikolaus Lenau's poems describe in five stages, partly based on Tudor accounts of the time, an account of Mary Stuart's fated life from her childhood in France with the young Dauphin, her calling across the North Sea to be Mary the First of Scotland, to her capture and beheading by her sister, Elizabeth the First of England. Dame Ann's performance of arguably Schumann's most dramatically powerful song cycle is as powerful as though she was in Mary's mind, so musically profound is her investment of the Scottish Queen's tragedy. Dame Ann is partnered superbly by Martineau, who makes Schumann's preludes, postludes and atmospheric accompaniments into pianistic tone poems of themselves.

The set of Goethe's 'Wilhelm Meister' songs (Schumann's Op. 98a) shows us that Dame Ann's voice is still firm and flexible, if perhaps the vibrato is beginning to loosen and top notes under pressure are slightly hard in tone. Whatever the sounds of ageing may be, her joy at converting good-quality German poetry into music with a whole palette of expression sounds undiminished.

Several of these songs are for duets or solos by other voices. Sadly, nowhere in Linn's packaging or website could I find indications of which singer was taking over or joining with Dame Ann. Track 7, the 'Ballade of the Harpist' is sung by German lyric baritone Benjamin Apl with a sonorous, warm tone against Martineau's rippling harp imitation. Apl sings again on Track 9 as the Harpist. Distinguishing the tenors is more difficult. I suspect that in Track 11,'Who gives himself to loneliness' John Mark Ainsley becomes the Harpist. Track 12 is a sparkling ripost from Ann in the Mezzo solo 'Not to sing in funeral tones' which fizzes like a lieder-scherzo, followed on Track 13 with Ainsley's poignant simplicity in 'From door to door will I steal'.

Track 15 is a touching duet for Mezzo and Tenor (probably Johnny Langridge with his mother) from Schumann's 4 Duets Op. 78 no. 4, 'I thank you'. Probably they also duet on Track 17, 'Family Painting' from 4 Duets Op.34 no. 4. Track 18, a Rückert song from 'Poems from Love's Springtime' Op. 12 No. 12, 'Truly as the sun shines' is a passionate love duet, between Dame Ann and probably Ainsley. Track 19 is the last in the Schumann section; Minnespiel, Op. 101, No. 3 'I am your tree' is for a solo tenor, probably Ainsley again. There are no clues about where the pianist Hester Dickson joined in a piano duet!

The seven Brahms songs are sung by Ann Murray as if she has absorbed them and polished them with a combination of clear-eyed freshness and a whole career of developing their meanings. Inevitably, the final song is the famous Lullaby from 5 Songs Op. 40. It was genuinely composed for the birth of a second baby to one of his friends, and Dame Ann and Martineau give it their all, making it glow and sooth but never over-sentimentalising. A worthy ending to this moving tribute for a phenomenal artist, who also is presenting it to her huge audience of record collectors as a final gift.

Sonically, this disc is puzzling. My first hearing in Multichannel (5.1, according to my Oppo, not mentioned on the liner notes) sounded just like a mono recording, with a very narrow central sound stage and little depth effect or distinctive ambiance from the Scottish Crear Studio (previously a byre). Most of the sound was coming from the centre speaker. Putting my ear directly on the front panel of my rear speakers, there was barely any signal there at all, even at higher volume. I had to put on other MC discs to check that my system was working properly. Touching the woofer cone, I could find no signal or very weak one there either. Switching to Stereo mode was a revelation; Murray's voice and the piano were louder and more convincing, with a laterally wider soundstage. the piano had a larger virtual size and was clearly behind Murray, who was somewhat right of the centre. The studio acoustic gave a spacious aura to the voice and piano, with only a faint reverberation and decay. I would advise listening to this disc in Stereo.

Despite the thin paper with see-through of the very small print, the liner has an extensive and excellent lesson about the music and the meaning of its poetry. The absence of information about the guest artists was, however, frustrating; it would not have been difficult to add stars to the track titles to indicate which guest was taking part.

Poorly-implemented as the alleged Multichannel may be, the Stereo track supports the magnificent performances of a Mezzo-Soprano's farewell recording very well, so that I hope that this MC oddity will not deter purchase by Ann Murray's thousands of admirers. This is the kind of disc which justifies the whole art of German Lieder and will provide many happy hours of listening.