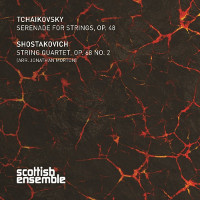 
Imbued with the classical spirit of Mozart, but with Tchaikovsky's style to the fore, the Serenade contains some strikingly effective scoring and an exhilarating Finale the ensemble relishes. SE brings the same level of precision and finish you would expect from a string quartet; this is particularly evident in the elegiac 3rd movement, one of Tchaikovsky's most inspired musical moments.

This recording also marks the premiere of Jonathan Morton's 2013 transcription of Shostakovich's Quartet No. 2. Drawn to the work's large, epic scale and the richness of its sound-world, Morton was keen for the ensemble to tackle this masterpiece from the chamber repertoire. With his arrangement Morton adds to SE's enviable reputation for Shostakovich transcriptions established by the late Rudolf Barshai.

This coupling on the Linn label of two Russian works for strings from the excellent players of the eighteen strong Scottish Ensemble led by their current Artistic Director Jonathan Morton has much to recommend it.

Tchaikovsky's Serenade for Strings has already received a considerable number of attractive recordings already on SACD, but this one will appeal especially to those seeking a performance that combines the transparency and lightness that a smaller body of strings can bring to the work with the enthusiasm and abundant esprit that these players undoubtedly display.

The opening bars of 'Pezzo in forma di sonatina' might strike some listeners as almost too aggressive, but Morton's fleet tempi matched by his players crisp articulation is undeniably exhilarating. The delightful 'Valse' that follows is characterised by elegant and subtly nuanced playing while the 'Elegia' moves at a flowing pace that allows appreciation of the rich string tone that this body can achieve. Morton makes the most of the contrast between the muted strings 'Andante' that begins the Finale and the vigorous folk-song based 'Allegro con Spirito' that drives the work to its scintillating conclusion.

Jonathan Morton's arrangement for the Scottish ensemble of Shostakovich's 2nd String Quartet of 1944 makes for an interesting contrast with the Tchaikovsky Serenade that precedes it on this SACD. The sheer scale of the Quartet's conception allows its transformation into a 'Chamber Symphony' to seem entirely natural and there is little doubt that arrangements such as this do have the benefit of bringing great music to a wider audience. It should be noted that an alternative arrangement of this particular quartet has already appeared on an excellent SACD from Candida Thompson and the Amsterdam Sinfonietta Shostakovich: String Quartets 2 & 4 - Amsterdam Sinfonietta. On both recordings the work is played with great intensity and depth of feeling by their respective ensembles and so couplings will probably be the deciding factor for many.

The Scottish Ensemble's bracing performances were recorded in the Caird Hall, Dundee in December 2013 by Calum Malcolm (engineer) and John Fraser (producer). The sound, barring a touch of hardness in forte passages, is clean, spacious and well able to convey the spontaneity of the playing.