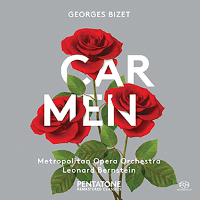 
The seeds were planted in the early 1970s when Deutsche Grammophon realised what amazing results could be achieved by recording on multi-channel tapes, using either four or eight channels. Yet, due to a few restrictions, they never fully blossomed. Flaws in the playback equipment meant that music connoisseurs were prevented from enjoying these recordings in the way that artists, producers, engineers and other professionals intended, even though recording technology was already way ahead of its time.

Now — over a quarter of a century later — and thanks to the arrival of the multi-channel Super Audio CD, there is finally a system available which permits these precious recordings to be released in the quality they deserved back then. Digitally re-mastered on 2 SACDs, this release also features a complete libretto both in French and English.

With delight, PENTATONE re-releases Georges Bizet’s opera Carmen, which remains one of the world’s most frequently performed operas from his repertoire. In one of its reviews in September 1982, the New York Times declared, “a strong vote for Bernstein’s much-debated 1973 recording of Bizet’s ‘Carmen,’ with the Metropolitan Opera Orchestra and the great Marilyn Horne in the title role.

Bernstein’s daringly slow tempos, though criticized by some, are revelatory. Ms. Horne’s ‘Habanera’ is all the more seductive for its reined-in pacing and sultry phrasing”. Many claim that it is by far the best recording of Carmen. Leonard Bernstein’s rendition is as sharp as Marilyn Horne and James McCracken’s performances are stunning.

When Leonard Bernstein's recording of Bizet's Carmen first appeared on LP in1973 it won a Grammy and sold over 100,000 copies as well as marking the start of Bernstein's relationship with Deutsche Grammophon, one that lasted right up to his death in1990. Thanks to this superb SACD re-mastering by PENTATONE of the original DGG quadraphonic tapes, the qualities of Bernstein's striking, if controversial version, of Bizet's opera can be assessed as never before.

This recording was made at sessions in the Manhattan Centre, New York in September 1972, during a run of performances of a new production of Carmen conceived by Bernstein and Göran Gentile, the Met's new general manager, who sadly was killed in a car crash before the production opened. It uses an appropriate amount of the spoken dialogue of the Fritz Oeser edition rather than the sung recitatives of the Guiraud edition heard on many earlier versions and, in spite of some less than idiomatic French accents from the singers, this works well.

Like many Bernstein recordings this one has its controversial aspects, the conductor's choices of tempo being the most obvious. For example, the opening Prelude is taken at a very deliberate pace and elsewhere some unusually steady tempi, as well as fast ones, will surprise many listeners, but Bernstein's compelling exposition of the tragic drama is so persuasive that one quickly gets used to these idiosyncrasies.

The cast is a strong one, crowned by Marilyn Horne's impressively sung portrayal of the heroine. Her rich singing is both seductive and powerful, yet she never sacrifices beauty of tone for theatrical effect and gives a fully rounded characterisation of the part. James McCracken is a virile sounding Don José and though his drift into falsetto voice at the end of the Flower Song sounds frankly bizarre elsewhere he sings with much sensitivity. Adriana Maliponte is a touching Micaëla with a lovely soaring vocal quality and Tom Krause provides a forthright and firmly sung Escamillo. The many smaller roles are also generally well cast. The singing of the Metropolitan Opera Children's Chorus is enthusiastic as is that of the Manhattan Opera Chorus (a replacement for the Metropolitan Opera chorus who had demanded higher payments for their services) trained by John Mauceri

The incisive playing of the Metropolitan Opera Orchestra is simply magnificent, its quality shining through in every bar, and the way it responds to Bernstein's direction clearly indicates the rapport the conductor established with the musicians during the course of the staged run. The gorgeous Entr'acte before Act 3 illustrates the point perfectly.

As an opera Carmen is action packed, and the DGG engineering team made full use of the possibilities offered by multi-channel sound to re-create the drama in purely aural terms. Off-stage effects – choruses, trumpet fanfares and the like – are brilliantly realised using the 4.0 channels most imaginatively. The sound throughout is pristine, with excellent balances between voices and orchestra - a tribute to the fine engineering of Günter Hermanns. The two well filled discs ( CD1 79'25”, CD2 80'35”) are handsomely presented in a hard-backed book with the full libretto in French and English.

Lover's of Bizet's Carmen have a bewildering selection of recordings from which to choose, but Bernstein's uniquely haunting and individual conception should be heard in this outstanding re-incarnation of a classic set.

This is a superb "Carmen" indeed. They have decided to keep the 4-channel recording in its original form, no additional centre channel or low-frequency channel. And what kind of miracles the engineers have managed to create back then! Thomas Mowrey and Gunter Hermanns were both masters with this new innovative surround technology. The offstage effects - such as distant trumpet fanfare at the beginning of the "Children's Choir" in Act 1 - were pleasantly realistic. The new DSD presentation reveals the details of the instrumental tones better than ever before. This is a unsurpassable album in the growing catalogue of "Remastered Classics". And a beautiful tribute to Finnish baritone Tom Krause who died just a year earlier on 3th December 2013 in Hamburg. Everybody should hear this. I've been completely satisfied.