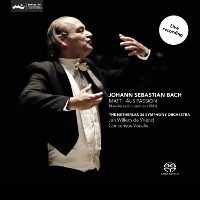 
On 11 March 1829 the 20-year-old Felix Mendelssohn conducted a performance of the St Matthew Passion, composed by Johann Sebastian Bach, in the concert hall of the Singakademie in Berlin, almost 100 years after the work had last been played. Some 900 people were in attendance, and the performance was so successful that it was repeated twice, on 21 March and on Good Friday, 17 April 1829.

Mendelssohn was given the score of the St Matthew Passion for his 15th birthday, 3 February 1824.. He knew of the score as one of Zelter's pupils and as a member of the Singakademie, which had a few chorus parts from the St Matthew in its repertoire. Zelter, the conductor of the Singakademie, found the work too difficult to be performed in public. Mendelssohn, however, had a different opinion. In 1828 he set to work on the score, making changes in line with the day and age and the instruments then commonly used. Mendelssohn meant many of his changes to provide a better understanding of what, in his opinion, formed the heart of the passion story.

After its successes in Berlin, the St Matthew Passion was performed in a number of German cities. In 1841 Mendelssohn gave a performance in Leipzig, where he was then Kapellmeister, in the Thomaskirche, the church where the work had first been performed. For its performance in 1841, Mendelssohn again made alterations to the score, but fewer than in 1828/1829.

It is this version from 1841 that you will hear in this recording. Mendelssohn was faced with a number of problems that made it quite difficult to perform the St Matthew Passion. For example, several instruments were no longer in general use: the oboe da caccia, the oboe d'amore, the gamba and the lute.

Whoever buys this disk without paying attention to the small print may be in for a deception for not getting ‘the real thing’. This is, indeed, not Bach’s St. Matthew, but Mendelssohn’s adaptation of it.

Scholars may start a chicken and egg quarrel over who gets the honour of reviving 18th century church music in the middle of the 19th, fact is that we owe it to Felix Mendelssohn & friends having done the musical community an immense favour by not only talking and writing about it, but with a re-make of Bach’s St. Matthew Passion, the first public performance of which took place at the newly built Berliner Sing-Akademie in 1829.

Although the adaptation is solely attributed to Mendelssohn, a fair deal must have been inspired by Zelter, Director of the Sing-Akademie in those days and a composer -of sorts- himself, in particular by suggesting ways of refreshing it ‘au goût du jour’ (bringing it closer to the musical taste of the day) and maybe also shortening it to an acceptable duration(?). To this end a number of arias were deleted, amongst which ‘Ich will dir mein Herze schenken’ (part I) and ‘Mache dich mein Herze rein’ (part II). For Mendelssohn it was important that the story, and thus the narrative, remained as closely as possible to the gospel, leading to further omissions of and adjustments in some of Bach’s texts. The (annotated) score, giving detailed insight in participants and ‘stimmen’ can be consulted in the Bodleian Museum at Oxford.

Several problems had to be solved, too: some instruments were no longer available like the ‘viola da Gamba’, ‘oboe da Caccia’ and ‘oboe d'Amore. They had to be replaced with their modern congeners, like cellos and clarinets. Furthermore, the absence in the score (the one young Felix had received as a Christmas present) of the figured bass had to be taken care of. And another problem to be dealt with was the fact that in the Hall of the Sing-Akademie no organ was available. Mendelssohn replaced it with a forte piano (played by him on its first performance).

This performance was a great success and two more followed in England. (One of Mendelsohn’s friends, Robert Schumann, took inspiration from it, setting him the task of doing the same with Bach’s Johannes Passion, see: Bach: Johannespassion - Max).

The version on this disk is not the one of 1829, but a later re-revised version, which Mendelsohn performed on Palm Sunday 1841, shortly after he had taken up Bach’s position as Cantor at the Sankt Thomaskirche in Leipzig. One chorale and 4 (sorely missed?) arias, as well as other elements were reinstated, as was the organ. Excellent and detailed liner notes give ample information about what had initially been deleted and later on reinstated, including other pertinent information.

Jan Willem de Vriend, actual Chef and Music Director of The Netherlands Symphony Orchestra, has a ‘period’ background from the days he was Chef of the Combattimento Consort Amsterdam. This leads to sporadic contradictions in Mendelssohn’s pre-romantic version. Christoph Spering (who recorded the world premiere on RBCD with Das Neue Orchester, soloists and Chorus Musicus for Opus 111) does the same, adding even period instruments and gut stringed strings. Hence the apparent difference in orchestral sound. In direct comparison (I compared with the 2000 re-issue of the original 1992 recording) Spering’s is lean and light as opposed to de Vriend’s more massive sound. Listener’s preference may lean towards the one or the other option. It’s a choice. I think de Vriend is right in choosing a much more romantic approach. As far as the continuo (two cellos and a bass) and the accompaniment of the arias are concerned, de Vriend clearly is the more voluptuous one.

Comparing the soloists it would seem to me that in both recordings budgets did not stretch far enough to contract the very best, at least not for all the parts. Conductors had to do with, certainly qualified, but a cast of a lesser choice. In a general sense one could argue that Spering had the better of it. To begin with: an all-German cast (with the exception of Alison Browner, but she is a long-time resident in Germany), which is of importance for those who want and are able to follow the text in its original language. Non-native singers have a tendency to swallow or disguise, as it were, parts or parts of syllables of some unfamiliar words, making it difficult, especially for equally non-native German listeners, to understand. The more so where narrative, recitative and sung texts hold together the integrality of this probably best theatrical piece ever. The liner notes give the full German text, but does, unfortunately, not cater for Anglo-Saxon (or French, for that matter) tongues.

The evangelist, Jörg Dürmüller does well in his narrative role, in particular in the ‘action’ parts, but his recitatives and arias are a different matter. ‘O Schmerz! Hier zittert das gequälte Herz’ and ‘Ich will bei meinem Jesum wachen’ don’t come off entirely satisfactorily. It is true that the evangelist has a dominant and very exigent part, making it difficult to handle more; that’s why an additional tenor should have been assigned for the arias, like in so many other recordings (as in Spering’s).

Bernarda Fink’s brother, Carlos, sings the Jesus role with much, almost too much, gusto in not so very good, sometimes awkwardly twisted German. This should not bother those who listen to his singing only, but for others it becomes troublesome on repeated listening. The female singers are up to the job, although I would have been more comfortable with less operatic voices. The choice for a soprano in ‘Buss und Reu’ and ‘Erbarme dich’ is Mendelsohn’s so de Vriend had no other option than to oblige. It may not be to everyone’s taste and most likely not at all to those familiar with Bach’s originals.

At the start of the Part II, Helena Rasker, with her dark alto (she is a contralto in real life), brings off ‘Nun ist mein Jesus hin’, better than Alison Browner in Spering’s rendition, but derails slightly in the second half of the aria, following the choir’s intervention. Maarten Koningsberger is convincingly one of the best in the cast and the choir is excellent, too.

Another aspect popping up is that Spering’s is a studio recording where the left/right effect of choir I and II and ditto orchestras could be exploited to maximum effect. The podium of ‘Muziekcentrum Enschede’, the Netherlands, does not allow de Vriend to do the same, making the sound stage smaller. One would have expected the sound engineers to help a little with their electronics for the benefit of this recording, notably in the opening choir.

Looking at both recordings as a whole, one cannot but admit that Spering and his forces create more tension, inducing active interest from the listener, whereas de Vriend, with good moments and less so, is uneven in his rendition. However, after a somewhat lackluster beginning the second part comes off markedly better and much more convincing: from the chorale ‘Wenn ich einmahl soll scheiden’ onwards, Jan Willem de Vriend, soloists, orchestra and choir take the listener by the hand towards a most rewarding and memorable close.

For a final judgement one ought to take into account that it is live recording in a single session, giving little opportunity to patch up things afterwards; knowing, too, that interaction between performers and audience can make a distinct difference: Sometimes its a great help; sometimes it isn't.

De Vriend has, without any doubt, the advantage of the better sound, maybe not as good as we have come to expect from Challenge Records and Northstar Recording Services B.V., but still of a more than acceptable qualitative level. But in the final analysis it does not fade away the spirited performance that Spering put on record 28 years ago. A missed opportunity? Not quite. This being the only high resolution account available, collectors may want to audition, like I did (and bought). And yes, there are some unavoidable noises like the choir standing up or sitting down.

One other point though: The liner notes don’t give any information about the soloists as has become customary these days.