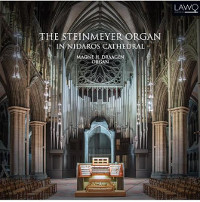 
The installation of one of northern Europe s largest church organs in Nidaros Cathedral was completed in 1930 for the 900th anniversary of the Battle of Stiklestad. In the years that followed, with constant exposure to dampness and draft, the organ became virtually unplayable. In 2012, an agreement was reached regarding the restoration of the organ, and by May 2014 it had been restored to its original splendor.

The city of Trondheim (previously Nidaros) is the capital of the Sør-Trøndelag province on the west coast of Norway. Its Cathedral, northernmost medieval cathedral in Scandinavia, is also one of the most important churches in Norway. The Cathedral was built over the burial site of St Olav (995-1030), a Christian Norwegian Viking King, patron saint of Norway. In the Middle Ages, and from 1818 to 1906, seven kings were crowned and ten buried there; even now Norway's kings receive a blessing in the Cathedral, as it is still regarded as a national shrine.

After several fires and years of negligence, the original church was almost completely destroyed. A major restoration of the Cathedral began in 1869 and lasted to 1969. The grand Bavarian-made Steinmeyer Organ was commissioned in 1930, replacing a nearly defunct Baroque organ (the Wagner Organ). Rather than restore much of the badly damaged sculpture and architectural detail, it was decided that the new artworks were created in Gothic style. A similar approach was used in the new organ; while keeping its historic usage, the latest techniques of the times were used in its build. The huge 100-stop all-electric organ was installed in the north transept, taking up the whole floor space there, with its membrane bellows in the undercroft. The console, on wheels, stood in the crossing of the cathedral, where the choir organ was also (oddly!). However, rapid changes in temperature and humidity as well as water leakage in the Cathedral resulted from the harsh cold of the Norwegian winter followed by dry, hot summers, and the organ rapidly deteriorated.

The great nave of the cathedral had already been completed for more than twenty years when in 1960, the organ was moved, placing it just in front of the cathedral's west wall, which had become the front façade. Because of the new fashion for neo-baroque organs, many of the old Steinmeyr pipes had been removed as surplus and stored; sadly, many were destroyed in fires.

In 2010 an organ restoration committee called for tenders throughout Europe, and in January 2012, they awarded the task to the famous Swiss Kuhn Organ Builders. Work began in Sept 2012 and was completed after only 20 months, with the original specification of the organ reinstated. The organ was to be heard again in its original splendour on 17 May 2014, and this recording made9-11 June 2014.

Much of the new pipe work was arrayed around the West Door, with the imposing 32' pipes at the front of the array, their wind chests sitting directly on the Cathedral floor. The beautiful 8m Rose Window over the door (presented as a gift from the Women of Norway for St. Olav's anniversary in 1930) is framed by the mane pipe registers. There are now 139 stops and over 9,600 pipes. The solo division is located in the south triforium, close to the crossing in the nave, while the delicate echo division remains at its original location in the tower at the crossing. The four-manual console, on wheels again, and fully electronic, has a MIDI connection to the organ which allows it to be variously placed.

Magne H Draagen is the organist and Nidaros Cathedral Director of Music, and as well as organ playing he composes and arranges. For the first recording of the organ in solo, he has devised an ingenious programme which illustrates its fundamentally German Romantic character but also its ability to play Baroque music and, of course, contemporary pieces. Some of the items in the recital also demonstrate the spatial placing of some registers within the Cathedral, giving a challenge for the Lawo engineers. Draagen's selection of pieces is designed not just for organ buffs but for music lovers in general.

It is invidious to select parts from Draagen's superbly coherent programme. I will just point out some of its attributes. The opening piece, an arrangement of Grieg's well-known 'Morganstemning' from Peer Gynt, stamps the programme as Norwegian. At the same time it demonstrates the wonderfully quiet but tonally rich registers which are so much a feature of the Steinberger design. Draagen's calm and expectant approach to the piece reflects Grieg's intention; its title means 'Morning Mood', and is not a full-bodied attempt to portray the sun rising as done by many orchestras. The Steinberger organ's ability to suggest a full orchestra with Flute and Strings, Horn, diverse Trumpet stops, Clarinet, Bassoon, and Oboe is well displayed, as good as an organ can do. Indeed, the solo French Horns sounding from a distance are quite the most convincing ones I have heard from an organ.

The soft and very soft output from some registers, are illustrated by Herbert Howells' initially conservative tribute to Thomas Tallis, Marcel Dupré's 'In Paradisum' and Max Reger's contemplative 'Benedictus' which erupts in a blaze of glory at the end. These and other gentle pieces are counterbalanced by those bringing the dazzling full or near Full Organ sound. For example, the grand, muscular and festive concluding piece by Eugène Gigout of 'Grande Choeur Dialogue' shows the regal aspect of the organ, and its ability for the pedal notes to shake your floor.

For fun, Egil Hovland's 'Toccata' is based on a rather jovial Norwegian chorale tune in a clever take-off of the famous Widor Toccata (essential for weddings!). Handel's 'Hornpipe' from his Water Music features a contest between the foundation stops and the Tuba stops of the Solo Division, which is situated in the south gallery of the west nave, distant from the main organ. Ludwig Nielsen, a previous Nidaros organist, contributes a fantasy on the sound of the Nidaros Clock chimes, interpolated with a folk tune 'Hear The Church Bells Beckon' from the Echo division, sited in the central tower at the crossing point, with the sound coming through a hole in the roof in the middle of the cathedral.

While the stereo sound excellently captures the organ in its cathedral acoustic (with a 5 sec decay), to get the most realistic sound you need to use the 5.0 multichannel track. Here, the engineers have been able to combine the detached solo and echo registers with those in the main organ in a 3-D sonic sound stage perspective which looses very little detail in the vast surrounding ambience, giving the listener the experience of being in the Cathedral. Engineer Thomas Walden and producer/editor Vegard Landaas have used the ability of DSD to record the organ's very wide dynamic range. The remarkably soft, detailed output from the "gentle" pipes of the main organ (or that from the distant echo registers) is beautifully conveyed, although I would advise using a higher than usual playback volume unless you have a listening room which has virtually no ambient noise.

Lawo's presentation is in a very light-weight digipak with a pocketed booklet, both graced with excellent colour photographs of the interior of Nideros with the organ at the west door, some architectural ornaments and the Rose Window. A comprehensive Disposition list of all the stops and connections of the renewed Steinmeyer organ is in the booklet, where Magne Draagen also gives us some "insider" comments about each of the fourteen tracks in his programme. These are in Norwegian and English.

Buyers should be aware that 'Steinmeyer Organ in Nidaros Cathedral' was first released as an RBCD and then as SA-CD stereo/multichannel owing to its popularity. Check carefully that the vendor is not giving you the RBCD version.

As well as being an interesting story about the "death" and "redemption" of an important organ in a building of profound historical significance, the attractive musical programme provides a vividly colourful
set of organ pieces, only a few of them being well-known. Superbly played with technical élan and genuine expression by Draagen and recorded most convincingly by the Lawo team, this phoenix-like reappearance of the Steinmeyer Organ gives us all the chance to take part and marvel at the restored organ's music-making.