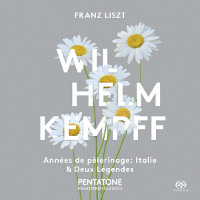 
The seeds were planted in the early 1970s when Deutsche Grammophon realised what amazing results could be achieved by recording on multi-channel tapes, using either four or eight channels. Yet, due to a few restrictions, they never fully blossomed. Flaws in the playback equipment meant that music connoisseurs were prevented from enjoying these recordings in the way that artists, producers, engineers and other professionals intended, even though recording technology was already way ahead of its time.

Now — over a quarter of a century later — and thanks to the arrival of the multi-channel Super Audio CD, there is finally a system available which permits these precious recordings to be released in the quality they deserve.One of those precious recordings comes in the form of the Franz Liszt’s Années de Pèlerinage II & Deux Légendes, which ranks among his most important works. Franz Liszt, the prodigious pianist, didn’t only draw his inspiration from art forms such as literature and visual arts, but also sought to collect them in a synaesthetic sense as a composer.

Wilhelm Kempff’s performance in this recording reflects all of those features engaged in detail in an exemplary manner. Referring specifically to Kempff’s non-bombastic Liszt, (Arthur) Brendel called them “the greatest we have”. In Kempff's hands, the pieces do indeed turn into a “pilgrimage” as the two Franciscan pieces integrate seamlessly into the journey. Get ready to follow the pilgrimage as it takes place.

This is very impressive. I have never owned this recording on DG but it sounds as though it could've been recorded only yesterday. Very few people got to experience the benefits of quadraphonic recording in the 1970s but now these old quad productions are proving to be a treasure trove for real multi-channel listening. The sound is notably superior to that of the Beethoven piano sonatas on Blu-ray audio which is quite lean and brittle and better too than that of the recent Schubert sonata set. The playing as always from Kempff is elegant and humane.