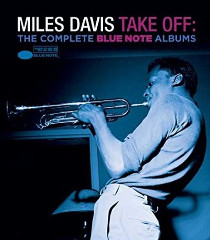 
A new, Miles Davis Estate-approved collection of Davis' three Blue Note 10-inch albums plus all alternate takes issued on subsequent 12-inch albums and CD reissues: a total of 26 tracks recorded for Blue Note Records on three dates in 1952, ’53 and ’54. This is the first time Davis’ 10-inch albums – Young Man With A Horn, Miles Davis Vol. 2 and Vol. 3 – have been issued in their original sequence since the early 1950s. The book-style packaging includes a 32-page booklet with an essay by respected jazz writer Kirk Silsbee, and other elements as noted.

Original transfers at 24/192 from analog masters by Bernie Grundman. Additional tracks mastered at 24/96 by Kevin Reeves and Robert Vosgien. Compiled and sequenced at 24/96 for Blu-Ray Audio release.
Resolutions (3)

Sextet sessions engineered by Doug Hawkins at WOR Studios on May 9, 1952 and April 20, 1953, and a March 6, 1954 quartet session recorded at Rudy Van Gelder's Hackensack studio were compiled and reissued in 2001 on two RVG Edition CDs, in 2014 on the CD box set Take Off: The Complete Blue Note Albums, and in 2015 on the present Blu-Ray.

In response to an earlier version of this review that questioned whether the original analogue tapes or Van Gelder's 2001 digital masters were used in the preparation of the Blu-Ray release, a label representative shared the following information:


"Bernie [Grundman] did the original transfer work from analog masters. He "created" new high resolution masters at 192/24 that Don Was approved for all of the Blue Note 75th anniversary projects. Bernie's task originally was to recreate the masters for BLP 1501 and 1502 - the 12" albums from Miles's BN catalog. When the idea for a complete Blue Note Takes came up, the albums needed re-sequencing and there were additional takes that needed to be added. That's where Kevin and Bob came in. They both did A-D transfers for the missing songs and in the process, additional, unreleased takes were discovered. Kevin did the sequencing for the CD version of this release but the BD master is different and was compiled by Arvato in Munich."


The differences between the 2001 CD release and the new Blu-Ray are not subtle. The Blu-Ray presents extended highs (within the limits of early 1950s technology) and flat bass response. Gil Coggins' piano and J.J. Johnson's trombone sound natural and detailed. Kenny Clarke's snare drum has snap and the cymbals are much more forward in the room than on the RVG CD. Miles Davis' open trumpet has clarity and sharp focus.

All of this sonic improvement would be of little service if these recordings were of lesser value to jazz collectors than Miles' better-known recordings from later in the 1950s. In fact, the '52 and '53 WOR sessions are worthwhile not only for the inventiveness of Miles' solos and the quality of J.J. Johnson's compositions and arrangements, but for a rare opportunity to hear the elegant keyboard style of pianist Gil Coggins.

Gil Coggins had a brief musical career; he was Miles' first choice for the 1952 and 1953 Blue Note sessions, and appeared on 1957's The Ray Draper Quintet featuring John Coltrane, but he quit live performing and did not return to public activity until the 1990s. In his autobiography Miles praised Coggins: "He was a hell of a piano player… If he had stayed at it I think he would have been one of the best piano players around."

The 30 tracks on the Blu-Ray—including 4 additional takes discovered since the 2014 CD set was released—revisit a transitional period in modern jazz when the first wave of bebop was flowing into a stream of musical tributaries. The trombonist-composer J.J. Johnson, who had played a major part in the Birth of the Cool sessions, lends his distinctive sound and arrangements to the sextet sessions. The May 1952 session opens with the lugubrious "Dear Old Stockholm", which Miles later re-recorded for Columbia Records. Other tunes such as "Woody 'N You", "Chance It" and "Ray's Idea" were identified with Dizzy Gillespie, and though Miles was laboring against the physical drag of heroin, he set up a challenge of distinguishing himself from Gillespie and the kind of bravura technical playing that Gillespie, and the rising young player Clifford Brown, represented. Miles solos economically, with a strong rhythmic pulse, against the expert drumming of Kenny Clarke on the 1952 tracks, and Art Blakey on the 1953 and '54 sessions.

From a distance of six decades, it is easy to overlook the short-lived careers of musicians like Gil Coggins who left few traces of their work for posterity. Coggins' decision to trade music for the real estate business because the income for jazz musicians was unpredictable and the lifestyle often self-destructive, could have served to bolster Miles' determination to take business matters more seriously and practice his profession with greater discipline.

By 1954 Miles had successfully kicked a 5-year heroin habit and had begun searching for a suitable framework of sidemen to reestablish his place in the top echelon of jazz trumpeters.