Totally agreed! That's exactly why I didn't buy this box set. Let's hope that symphonies 0 and 8 will eventually be released individually.

I think your assumption is somewhat flattering to Pentatone whose values seem to have undergone a sea change of late. DSD and SACD seem to have been brushed aside in favour of ...

Looking at the waveform this is clearly mastered from 44.1khz Red Book PCM - but the recording is lovely, the pieces are uncommon, and the multichannel is good. 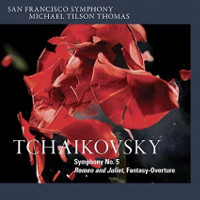 
Michael Tilson Thomas and the San Francisco Symphony unleash the passion and triumph of Tchaikovsky's Symphony No. 5 and Romeo and Juliet, Fantasy-Overture, in a live, 192/24 bit recording released as a Hybrid SACD.
Passion, love and triumph, as imagined by Tchaikovsky, are captured in sweeping glory by the award-winning, chart-topping team of Michael Tilson Thomas and the San Francisco Symphony. Tchaikovsky's heroic Fifth Symphony and the passionate Romeo and Juliet, Fantasy-Overture, which features one of the best-known love themes ever written - receive rapturous performances under a conductor whose Russian roots reveal the very esssence of the composer's emotional output.

Tilson Thomas says, "It has been possible in my life to not only perform [Tchaikovsky's Fifth] a lot, but to harken back to the sense of elegance that Piatigorsky, Heifetz and Rubinstein imparted to me about this kind of music." Captured live in the orchestra's home, Davies Symphony Hall, the audiophile release was recorded in 192/24 bit and is released as a Hybrid SACD.

With a catalogue crammed full of recordings of this particular pair of Tchaikovsky's most popular works one might wonder whether any new recording of them is really needed - even on SACD. Such thoughts, however, are at once dispelled by these magnificently executed and superbly recorded accounts of both pieces from Michael Tilson Thomas and the San Francisco Symphony Orchestra.

A glance at the timings for each of the Symphony's four movements (1 16.09, II 14.40, III 06.20, IV 13.24) suggests that this is not going to be one of those hell-for-leather performances where superficial excitement is considered to be of greater importance than elegance and poise. Yet, after the quite measured and sober delivery of the introduction, at no point in MTT's expansive reading of this work did I feel that it was just too leisurely. MTT illuminates details in both scores that other conductors gloss over, and nowhere did I find myself yearning for more drive or passion in a performance notable for the conductor's sympathetic shaping of Tchaikovsky's gorgeous melodies.

MTT's account of the slow movement is one of the loveliest I have heard. Opening with a most eloquent horn solo from the San Francisco Symphony principal horn Robert Ward, it flows with consummate grace and a naturalness that many other conductors cannot match. The Symphony's finale, though steadily paced, is purposeful, but not unexciting, while its triumphant closing bars are notable for a refreshing absence of bombast. Those requiring a more urgent and muscular performance of Tchaikovsky's 5th Symphony on SACD should seek out the version by Daniele Gatti and the Royal Philharmonic Orchestra Tchaikovsky: Symphony No. 5, Romeo & Juliet - Gatti while those who favour more of the qualities I have mentioned above will be more than well served by MTT.

I also very much enjoyed MTT's account of the 'Fantasy-Overture Romeo and Juliet'. Here the conductor wisely avoids lingering too much over the doleful opening section. Too slow a tempo can make one impatient for the arrival of the 'Allegro giusto' passage representing the conflict between the Montagues and the Capulets. The sweeping lyricism of the 'love theme' is given its full head thanks to the mellow but not over-ripe string playing. Overall this beautifully manicured, though it must be admitted, not especially distinctive reading, gives much pleasure. It should be mentioned that applause is retained at the end of the Overture, though there is no applause after the Symphony.

The recording matches the excellent standards we have become used to from this source and the PCM 192 kHz / 24-bit 5.0 multichannel live recording provides all the vividness that is necessary to enjoy these two works to the full. My one criticism of the sound is that the cymbals in the Overture could have been given a more forward presence, as their transients lack the metallic sheen that one experiences in many other recordings and, of course, live performances.