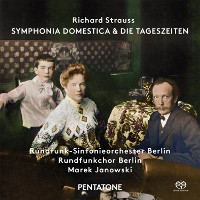 
Richard Strauss’s original working title for the work was “My home. A symphonic portrait of myself and my family” and was intended as a homely sequel to Ein Heldenleben (1898). Instead of the hero’s struggle for supremacy, Symphonia presents a portrait of a family, with the husband, wife and child each characterised by themes.

Family and home as the theme of a symphony? The musical aspect of subjects such as visiting relatives, children’s play, lullabies, a love scene and an argument between spouses most certainly did not correspond to the themes that were usually combined with absolute music. All the commotion around it was silenced by Strauss’s famous remark, “I do not see why I should not make a symphony about myself. I consider myself just as interesting as Napoleon and Alexander”.

One fascinating feature of Symphonia is based on another contradiction, which Strauss manages to solve here in a brilliant manner. The intimate family situation is paired with a huge orchestral force. He makes use of the full orchestra when required; however, when the piece turns into an intimate dialogue, he portrays it masterfully.

For all the popularity of many of Richard Strauss’s tone poems, Symphonia isn’t recorded all that often and, arguably, it is even less frequently performed in concert. This luminous recording of Symphonia Domestica tells us what we are in for: an excellent recording with plenty of inner details, Marek Janowski’s straightforward conducting and Rundfunk Synfonie-Berlin orchestra’s zesty performance.

PENTATONE’s sound is remarkably warm and clear, vividly illustrating the magnetism of a day in the life of Strauss, his wife Pauline and their child Bubi. Die Tageszeiten for male choir and orchestra was commissioned in 1927 by the Wiener Schubertbund (the Vienna Schubert Choral Society), who also performed the première of the piece under conductor Viktor Keldorfer on 21 July 1928 in Vienna during the Deutsche Sängerbundesfest (German Choral Society Festival).

Here, Strauss set poems by Eichendorff to music in four romantic scenes: Der Morgen (‘morning’), Mittagsruh (‘afternoon rest’), Der Abend (‘evening’) and Die Nacht (‘night’). The pieces have also been described as the Four Last Songs for Choir, thus theoretically referring - in Die Nacht, with its birdsong imitated by flute and clarinet - to Im Abendrot (‘at sunset’) from the Vier Letzte Lieder (‘the Four Last Songs’).

The choral settings have a captivating harmonic luminosity, melodic simplicity, instrumental finesse, and an almost unheard-of sonic serenity. “[Here] choir and orchestra [are] brought to a perfect balance [...] both partners share the invocation of the idyllic and the dark sides of romantic nature.” (Eichner). Such a gem of a recording is a must have for any serious Strauss lover!

All Straussians will be delighted with the appearance of this handsome SACD release of Richard Strauss's 'Symphonia Domestica' from Marek Janowski and his splendid Berlin Radio Symphony Orchestra. Janowski's pre-eminence in Wagner may have overshadowed his reputation as a Strauss interpreter of distinction, but those with long memories will remember that he was the conductor of the first ever uncut recording of Strauss's opera 'Die Schweigsame Frau' for EMI and more recently he made a compelling account of the 'Alpine Symphony' for PENTATONE Strauss: Eine Alpensinfonie, Macbeth - Janowski.

The 'Symphonia Domestica' was written in 1903 and is the penultimate of Strauss's many tone poems. The work is a musical portrait of one day in the life of the Strauss household and is dedicated appropriately to “To my dear wife and son”. Shortly after the work's premiere, which took place in New York during his American tour in 1904, the composer faced considerable criticism, not for the music per se, but for his 'bad taste' in depicting aspects of his private life that included his sexual relations with his wife, their frequent quarrelling and the musical onomatopoeic yelling of their baby son at bedtime. Such criticism seems rather quaint, if not ridiculous, from today's standpoint in a world dominated by social media where the most intimate details of celebrities' lives are frequently open to pernicious scrutiny with ease via the Internet.

Though the work has four sections that roughly correspond to the movements of a symphony, including a 'Scherzo', 'Adagio' and a 'Finale', it is probably best viewed as a large-scale symphonic poem in one continuous movement integrated by the constantly recurring themes of its three characters (husband, wife and child) that are presented in the opening section. The instrumentation of the 'Symphonia Domestica' is even more extravagant than that of Strauss's previous tone poem 'Ein Heldenleben' – triple woodwind, that unusually includes an oboe d'amore, eight horns, four saxophones a large percussion section, two harps and strings. Strauss uses these gargantuan forces for the most part with surprising delicacy and only in the complex polyphony of the fugal 'Finale' does he unleash them with an exhilarating élan that while thrilling can verge on the bombastic.

There have been many fine recordings of the piece, including some from conductors who knew the composer personally – Krauss, Szell, Karajan and Reiner – and other more recent recommendable versions to which this new one can certainly be added. Somewhat to my surprise Marek Janowski directs a fairly spacious and relaxed performance of the work, but one that does allow beautifully shaped and affectionate phrasing from the players of his responsive Berlin Radio Symphony Orchestra in the many solos that Strauss gives them throughout the work. Thanks to meticulously judged balances Janowski manages to achieve the utmost clarity and precision throughout; seemingly undaunted by the challenges presented by the huge orchestra's complex textures, especially in the Finale. His meticulous control of dynamics is also most impressive, whilst the brilliance of the playing ensures that all the big climaxes are thrillingly delivered. Janowski's buoyant and supple account of the 'Symphonia Domestica', sumptuously recorded by the Polyhymnia team in vivid 5.0 multi-channel DSD, is surely one that all who admire this piece will wish to add to their libraries.

What, however, makes this release quite unmissable is the second work on the disc – 'Die Tageszeiten' (Times of the Day) for male voice chorus and orchestra – a real Strauss rarity.
In 1924 Victor Keldorfer conductor of the Vienna Schubert Society took the opportunity to ask Strauss to write something for the choir, and suggested that texts by Josef Eichendorf might be suitable. Though initially dubious, Strauss eventually agreed and by 1927 the work was completed.
The four Eichendorf poems that Strauss sets are 'Der Morgen' (morning), 'Mittagsruh' (afternoon rest), 'Der Abend' (evening) and 'Die Nacht' (night). Strauss's artistry in matching words and music is incomparable, and each of the four settings possess a glowing mellifluousness and melodic richness that bring to mind the late operas 'Daphne' and 'Capriccio' and especially the 'Four Last Songs', where Strauss again turned to Eichendorf for the final song 'Im Abendrot'.

The firm, disciplined yet sensitive singing of the gentlemen of the excellent Berlin Radio Choir could hardly be bettered, and Janowski elicits the most gorgeous and luminous sonorities from his orchestra. The neglect of 'Die Tageszeiten' in the concert hall is perplexing and one can only hope that this beautiful recording will help to bring it into greater prominence. PENTATONE's liner notes do include full texts and translations of the Eichendorf poems.

A most enthusiastic recommendation is warranted for this release.