At last it looks like we will get a decent M10. We seem to have numerous other versions expect one from Mr Cooke who got the ball rolling. Looking forward to this. Ta ... 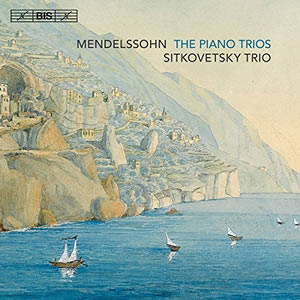 
‘The masterpiece of our time in the trio genre’ is how Robert Schumann described Mendelssohn’s Piano Trio in D minor when he reviewed the work upon its publication in 1840. Comparing it to the trios by Beethoven and Schubert, Schumann continued: ‘a very beautiful composition, which in years to come will continue to delight our grandchildren and great-grandchildren.’ And so it has – the D minor trio remains one of the most popular of Mendelssohn’s chamber works, uniting the composer’s gift for melody with his feeling for textures and formal mastery. Considering how naturally the music flows, it is somewhat surprising to lean that Mendelssohn revised the work extensively at least twice before publication – the last time on the advice of the pianist Ferdinand Hiller, who suggested that some of the piano writing was ‘rather old-fashioned, to put it bluntly.’ Mendelssohn made substantial revisions to the piano part, and later commented that ‘pianists will enjoy playing it because it also gives them an opportunity to show off.’

A few years later the Piano Trio No. 2 in C minor flowed more easily from his pen, and was composed between February and April 1845. An intensely emotional first movement is followed by a blissful Andante espressivo and a shimmering, truly Mendelsohnian Scherzo. The Finale returns to the passionate mood of the opening, but in the course of the movement hymn-like allusions appear and lend an air of sacred celebration to the movement.

These two highpoints in the Romantic repertoire for piano trio are here performed by the young Sitkovetsky Trio. The ensemble made their début on disc in 2014 with recordings of trios by Dvořák and Smetana, to critical acclaim: ‘A grandiose recording by three grandiose young musicians, forming a trio of great integrity’, was the verdict in the German magazine Ensemble, which also chose the disc as its ‘Five Star Recording’.

BIS jumps into a crowded field with this issue of Piano Trio favorites by Felix Mendelssohn. On SACD alone there are four other releases with this coupling let alone the 70+ RBCD recordings of these two endearing chamber works. So as not to keep the reader waiting, I can say up front that this is a very worthwhile recording with top rank performances and sound. Let’s delve into the details.

The first thing to note is that the total timing of this SACD is 57 minutes as it only contains the two Mendelssohn trios. That is a deficit to the value proposition of this disc. Surely, another trio could have been included to sweeten the pot. Also, BIS has placed the less popular Second Trio, Op.66 in first position. Now, this is a very minor issue with digital playback technology but one still wonders why they chose that order. And with that, we have dispensed with the negatives of this release. Now, onto the positives.

The Sitkovetsky Trio is comprised of Alexander Sitkovetsky, violin, Leonard Elschenbroich, cello and Wu Qian, piano. They formed in 2007 and since then have honed their craft to a very high level. They play these Mendelssohn trios with verve and panache. Just wait until you hear them ignite during the scherzo movements of both trios – truly amazing playing with fantastic ensemble! Their uniformity of phrasing and measure to measure dynamics is breathtaking. In the slower music, their playing exudes romance and character. With exquisite playing like that, one can understand why BIS jumped into this crowded field.

So, what of the competition? In high resolution, I am only familiar with the Pentatone release featuring an ad hoc trio with star violinist Julia Fischer at the helm. See my recently updated review here: Mendelssohn: Piano Trios - Fischer, Gilad, Müller-Schott. As good as that ad hoc group is, the Sitkovetsky Trio outshines them in every way. It is apparent when comparing these two discs that the Sitkovetsky’s know each other in a deep way because there is nary any roughness in ensemble in their playing. Sonically, this BIS SACD also takes the prize over that Pentatone release. There is a wholeness to the soundstage here that creates that extra degree of realness – we are hearing a piano trio in a real space with proper instrument bloom and harmonic balances. My one quibble with the BIS recording is that the Steinway piano lacks a little bit of sparkle at the top. The recording was made at St Georges’s in Bristol, England in January, 2014 and was produced and engineered by Marion Schwebel. The recording is from a 24-bit/96 kHz master. Highly recommended!

The performance and recording couldn't be more different than the Fischer recording. Both are enjoyable, but this recording has the definite feel of chamber music. The pianist is nothing short of excellent and the balance seems quite natural. Kudos to the musicians and the recording engineer. 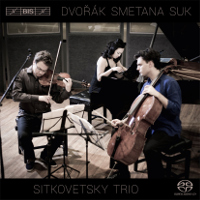