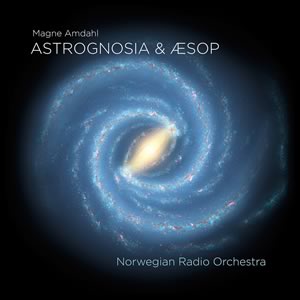 
The stars and the sky at night have always fascinated people and kindled wonder, faith and Superstition. In ASTROGNOSIA we are in the world of astrology with its interpretation of the year's twelve signs of the zodiac, each with its own characteristics. The work is held together by the changing phases of the moon on its journey through the heavens, and it is Played here by the Norwegian Radio Orchestra , Conducted by Ingar Bergby Heine. AESOP'S FABLE is underwritten for narrator and orchestra - the narrator here being Dennis Storhøi - and is based on Herman Wildenvey's translation of the fables. It is inspired by Wildenvey's playful re-telling of the stories in dazzlingly rhythmic verse.

Magne Amdahl (born 1942) is one of Norway's most versatile musicians; as well as composer, orchestra conductor, pianist and a jazz band 'Quick Island Fiasco'. His experience of classical music came as a pianist in the Oslo Philharmonic Orchestra and the Norwegian Opera Orchestra; but he also gained skill in "Easy Listening" as a long conductor of the Oslo Nye Theater (1970-2000). He directed over seventy productions, and also made music including "Journey to the Christmas Star" (a Christmas film) and "You made me happy", Norway's contribution to Eurovision in 1976.

2L have selected two of Amdahl's most unusual pieces; Astrognosia (1991) and Æsops Fabler (The Fables of Æsops), 2012. Astrognosia, an orchestral suite, gained a prize for Light Music from Scandinavian radio broadcasters. "Symphonic" would also be an appropriate term, thanks to the lush orchestration played appropriately (and superbly) by the Norwegian Radio Orchestra.

Astrognosia refers to the so-called signs of the stars, and Amdahl mentions that he became absolutely fascinated in his reading by the alleged phenomenon of astrology, and his music gained inspiration because of this. He discovered that the book "Complete Astrology" by Alan Loken, claimed that characteristics of people who were born "under" particular signs of the zodiac, which Amdahl attempted to express musically. A structure of sections from the twelve signs of the zodiac was constructed, with groups of four linked by a theme representing the Moon, (supposedly another astrological element), with a Prelodium plus Interlodiums I-3. The music is engaging, with many fine melodies (but not quite memorable), lightly sprung with jazz and waltz elements, and a sumptuous orchestral sound which reminded me of Gershwin. Evidently the Norwegian Radio Orchestra enjoyed their part too, well-balanced and coherent under the deft baton of Ingar Heine Bergby, who is hardly even mentioned in the disks' booklet.

'Æsops Fabler' contains another list of items, short stories this time, mostly telling of a specific interaction between humans and animals. This Greek list of about 108 stories, probably originating in the time of Æsop (620 to 560 B.C.) and being added to afterwards, provides us with Morals, Sayings and Proverbs. The stories are evidently directed at children. Rather than portray them purely orchestrally, this time Amdahl decided to have a soloist with the orchestra, not to sing the stories but to voice-act them. He contacted a theatrical friend, Dennis Storhøi, who agreed to narrate (not just read out) in the presence of the whole Norwegian Radio Orchestra with an array of extra percussion instruments for illustrating actions with "effaces of outburst of sound" as Amdahl put it.

The basic idea of 'Æsops Fabler' is its innate interest for children, attracted by titles like "The Crow in borrowed feathers", "A Mule", "The Lion and the Fox" and "Wolf in Sheep's clothing". "Children" here though, must be Norwegian and listening to Storhøi, not follow the written in the booklet. There is an English translation parallel to the Norwegian text in the pages of the booklet but the printing is very small and it is easy to loose your place. I know some Norwegian, but one has to be fluent to make sense of Storhøi's vivid changing voices as he "acts" each fable. If you have to just listen, having lost your way in the text, is certainly disappointing.

2L's 'Immersive Sound' is once again the aim of Plagge and Lindberg, using the remarkable acoustic of the Jar (pronounced Yar) Church in Oslo, with low walls and high wooden roof, which makes an A-frame architecture. I listened to the Blu-Ray disc in Pure Audio Blu-ray DTS HD MA at 192kHz/24 bit 5.1 and MCH 5.1 DSD for SACD.The orchestra is arranged in a near circle with up to 5 layers, Ingar Heine Bergby conducting from the centre rear (Storhøi is centre front in 'Æsops Fabler'). Glockenspiel, bells, brass, Xylophone, Tam-Tam (behind the conductor!), Snare Drum, Tom-Toms, Bass Drum, Tympani, Crash Cymbal and, in a front inner ring, the Hi-Hat and Marimba are placed nearest to the 7-microphone stand. All these arrangements are illustrated copiously in the 2-disc's booklet.

This arrangement of performers is probably the most complex so far I have seen from 2L's output, and, in the wonderful ambience of the Jar Church it makes a spectacular sound-stage for these two performances. The placing some of the percussion instruments around the back and the horns to the side has allowed the brain processes to identify the percussion's relative location, mainly from play which has sharp attacks, while the bowed strings behind one tend only to be heard around the front, as psychoacoustics tells us. 5.1 multichannel therefore is doing its job accurately; so are the high-resolutions of recording, as listening to SACD and Blu-ray convinces.

Despite my rejection of astrology, as I am a scientist, I admit that it is a romantic concept, one in which stimulated Magne Amdahl to presented it in orchestral sound. "Light Music" becomes brilliantly colourful and tuneful to illustrate stars and even the Moon, in a way made especially with the orchestra wrapping around you in your music room. 'Æsops Fabler' is for me somewhat less exciting, mainly because the vocals are only in Norwegian, so listeners of other languages loose Dennis Storhø's performance. Given the larger space of BDs, it is a pity that an English version could have been made. However, I much enjoyed this 2 disc set, not just for the music but for a glorious 3-D recording. Well worth trying if you have a good 5.1 or better multichannel set-up, but still very entertaining in Stereo!