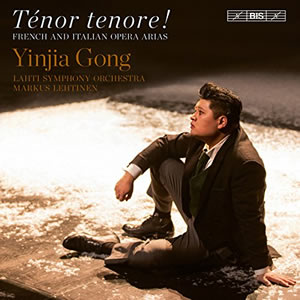 
The myth of the modern tenor was born in Paris on 17th April 1837, when, at a performance of Rossini’s William Tell, Gilbert Duprez first sang a top C in the chest register. The hitherto unknown expressive power provoked a massive reaction from the audience and the tenor voice soon became a trademark of the young, valiant hero. Ever since, tenors have enjoyed an almost mythical reputation among music-lovers, and ranging from Caruso to the Three Tenors by way of the likes of Gigli, Björling and Bergonzi, they are the only classical musicians whose popularity extends far beyond specialist circles and across the entire world.

Yinjia Gong grew up in the province of Guizhou in China, and developed an interest in music early on. While studying Chinese traditional music he became fascinated with Western opera, and in 2008 his admiration for the great Swedish tenors Jussi Björling and Nicolai Gedda took him to Sweden. There Gong's impressive top register soon attracted attention, and in 2011 he was invited to perform at a gala concert at the Royal Swedish Opera, commemorating the centennial of Björling's birth. Appearing alongside singers such as Jonas Kaufmann and Charles Castronovo, Gong was given the honour of performing Puccini’s Nessun dorma – one of Björling’s ‘greatest hits’.

Naturally, Nessun dorma is also part of the programme on Gong's début recording, along with a series of other jewels of the tenor repertoire, including Donizetti's Ah! mes amis from La fille du régiment with its famous multiple high Cs, and the even more taxing 'Postillion's Song' by Adolphe Adam featuring a resplendent high D. While including highlights in terms of both pitch and emotional content, the programme also charts the golden age of Italian and French opera from the beginning of the nineteenth century to the start of the twentieth.

Yinjia Gong was born in 1983 in Sichuan, China. He had an innate love for music which was encouraged by his grandfather, who worked at the Peking opera. After first studying popular music at the conservatory in Sichuan, Yinjia Gong developed an interest in western opera, the 'Bel Canto' style in particular catching his attention. Unlike most other prospective tenors, who would likely go to Italy for further training in Italian opera, Yinjia Gong was taken with the artistry of Swedish tenors Jussi Björling and Nicolai Gedda. He therefore moved to Sweden in 2008 and pursued his opera studies at the Malmö Academy of Music, followed by the University College of Opera in Stockholm, where he received his Masters Degree in Spring 2012.

While in training, Yinjia Gong had several roles in Italian opera at the Royal Opera in Stockholm. This is his first recording, bringing his voice and enthusiasm to a much wider audience. Rather than the list of usual suspects of famous arias produced by many tenors in their première recording, Yinjia Gong has an attractive and intelligent programme which charts the parallel developments of Italian Opera and French Opera in the nineteenth century. Rather unusually, the tenor allows the orchestra to play alone, choosing three between-acts orchestral pieces which breakup his vocal programme nicely. Thus the wonderful Lahti Symphony Orchestra of Finland has a chance to make its own operatic comments, under the baton of Markus Lehtinen, permanent conductor at the Royal Danish Theatre and Finnish National Opera.

Yinjia Gong seems to have the main musical characteristics required for the "modern" tenor, although we have no visual information about his acting skills. His Bel Canto preference for rôles classifies him as a Lyric Tenor, although judging from his ringing 'Nessun Dorma', there are suggestions that he has the power and technique to move into the Heroic class, should his future career take this direction. He certainly has plenty of power and control over his voice, a sonorous low range, good chest voice, smooth transition to the higher region (known as "squillo") and the ability to hit the legendary upper Cs with confidence and accuracy. Donizetti's 'Ah! mes amis", a fabulous show-off piece from his Opéra-Comique 'La fille du régiment', has no less than nine high Cs, six of them in a staccato passage, and Yinjia Gong does this very well, although he has not yet got quite the sense of comedy in this aria, needing to lighten the voice at times. Another very tricky technique is the diminuendo down from a high C to a lower tone, and he illustrates his ability to do this.

Markus Lehtinen brings to bear his operatic skills in using tempi which do not over challenge Yinjia Gong's aprenticeship, just as the orchestra performs as a sympathetic accompanist. The organ in Massenet's 'Je Suis Seul' is authentically handled and in general the orchestra play richly and lyrically. Their "solo" pieces (Verdi's 'La Traviata: Prelude to Act 1, Bizet's Intermezzo from 'Carmen Suite' and Puccini's 'Manon Lescaut': Intermezzo from Act III) add delightful operatic atmosphere to the programme. All praise to the real soloists in the orchestra, too.

Take5 Music Production supplied producer and sound engineer for the two sessions, May 2013 and August 2004 at the Sibelius Hall in Lahti. I usually listen in multichannel, and was astonished at the very un-natural sound presented. The orchestra was very distant, the voice even further so, in an acoustic which has been called "heavenly" but is better described in this case as a large swimming baths, so much hollow reverberation was evident. Turning up the volume brought the music forward, but Yinjia Gong's upper region at his crescendos produced a metallic overtone and hardness which I found tiring. Deep bass tended too be boomy.

Oddly enough, from the Manon Intermezzo onwards, the sound was much more natural, with a wider orchestra, the voice clearer and less prone to upper region hardness. Perhaps these last 3 tracks were captured at a different session.

Investigating this further, as it was nowhere near the fine recordings which have been made in the Sibelius Hall, I disabled the front speakers, so I could hear the centre speaker. This was outputting an orchestra far away in a foggy distance, with the voice hardly discernible, as it were, at the end of a very long tube beyond the hall. The L and R back speakers (in the 5.0 mode) were somewhat louder but still in an over-resonant space, with the voice again very distant - VERY off-stage!. Clearly the central speaker was not used in its usual function (to "anchor" the centre of the orchestra between the front speakers).

I next tried the Stereo layer, and here was a marked difference, with the orchestra much closer and on a wider stage, the voice just in front and without the metallic resonance at loud, high pitch. Focus was much better, so the orchestral departments were clearly defined aurally, with thrilling brass catching the natural acoustic bloom of the Sibelius Hall, and solid deep bass from the tam-tam and bass drum. The CD layer was similar in effect, and even it was much more pleasant than the 5.0 multichannel.

I am sorry that my first hearing of Yinjia Gong's voice was in a very distracting setting. Thankfully, there was a Stereo version which approached the BIS' finest capture and did him justice. I would therefore happily recommend the Stereo but not the 5.0, which is a pity. If you have a receiver or amp with PLIIx generation of surround sound on which to run the Stereo layer, this provides a far better multichannel sound than that on this disc.

Considering Yinjia Gong's passion for western opera in his early days, it will be interesting to hear, and perhaps see, his progress in the future.