Scriabin: Symphony No. 1 & The Poem of Ecstasy - Pletnev 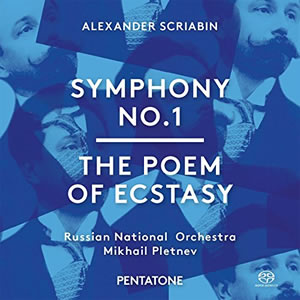 
In 1899, Scriabin began writing his most ambitious composition to date: the First Symphony. The work still reflects the influence of the traditional four-movement formal scheme. The first movement, in sonata form (Allegro dramatico), is followed by a slow movement (Lento), a scherzo (Vivace) and an Allegro, again in sonata form. But Scriabin also framed the symphony with an introductory movement in a slow tempo and a monumental choral finale with a text of his own composition, and it is this movement that can be said to occupy the work’s interpretational centre of gravity. The First Symphony documents a search for salvation and unification, both of which can only be found in art: “May your mighty and free spirit reign all-powerfully on earth; and humanity, lifted up by you, perform a noble deed. Come all nations of the world and let us sing praises to art!”

Le Poème de l’extase debuted in New York on 10 December 1908, after a performance in Russia had to be cancelled due to the difficulty of the score.However, when the Russian première finally did take place, on 1 February 1909, it wound up being a true spectacle. The then young composition student, Sergei Prokofiev wrote, “Myaskovsky and I sat next to each other and consumed the Poème de l’extase with the greatest of interest, although, at different moments during the performance, we were entirely confused by the newness of the music. We had expected something surpassing the divine Poème, which we both knew well and loved. But both the harmonic and thematic material of the work, as well as its contrapuntal voice-leading, resembled nothing we had ever heard before.”

Conductor Mikhail Pletnev surpasses the extreme with his Scriabin interpretation and draws what he needs from the Russian National Orchestra - the Moscow-based ensemble he founded in 1990. This results in a near perfect performance of both works. Blessed by the orchestra’s warm, vibrant playing, this CD is a real pleasure for everyone who adores the esoteric and unorthodox work of Scriabin. It is definitely THE Symphony No. 1 and Poem of Ecstasy to own: an ideal performance with sonic audio quality to match.

Recorded in March 2014 at the DZZ Studio 5, Moscow, Russia
Organ has been recorded separately at the St. Ludwig-Kirche in Berlin-Wilmersdorf, Germany

Though the composer Alexander Scriabin (1874-1915) is most fêted for his piano music, his grandiloquent symphonic works are generally less highly regarded and, apart from the 'Poem of Ecstasy', are rarely heard in the concert hall. On this stunning new SACD from PENTATONE the latter work is coupled with Scriabin's 1st Symphony, both performed by the Russian National Orchestra under Mikhail Pletnev. Pletnev has previously recorded the 'The Poem of Ecstasy' with this same orchestra (coupled on that occasion with Scriabin's 3rd Symphony) for Deutsche Grammophon, so it is no surprise to find that, as a formidable interpreter of the composer's piano works, his allegiance to this sumptuous music is immediately evident.

In his grandiose 1st Symphony of 1899 Scriabin extends the normal four movement symphonic structure to six by adding an introduction and a finale requiring a soprano, tenor and mixed chorus. The work may be no masterpiece but is a wonderfully romantic wallow for the receptive listener.
Pletnev's account of the Symphony is spacious and well-manicured, but though lacking some of the fire and passion of, for example, Riccardo Muti's 1985 CD account of this work, is an equally valid and compelling interpretation. Where Muti is urgent in all six movements Pletnev prefers to dwell on the voluptuousness and languor of Scriabin's writing. Even the short 4th movement, marked 'Vivace', is taken at a quite sedate tempo, though it is performed with great delicacy and lightness. Pletnev is at his best in the slow sections of the symphony (of which there are a considerable number). He is fully attuned to the music's luscious sensuality and the superb musicians of the Russian National Orchestra readily respond with playing of marvellous tonal refulgence, captured in what, even by their own exalted standards, must surely be one of PENTATONE's finest 5.0 DSD recordings. Though vocalisations from the conductor are occasionally audible, they are not really disturbing.

The two idiomatic soloists, soprano Svetlana Shilova and tenor Mikhail Gubsky together with the Chamber Choir of the Moscow Conservatory deliver Scriabin's rather banal poem in praise of art with surprising conviction and excellent full-bodied singing.

The single-movement 'The Poem of Ecstasy'(often regarded as the composer's 4th Symphony) is more of a symphonic poem than a true symphony. It relates to the Spirit's search for ecstasy with themes symbolising longing, aspiration, victory etc. The music alternates between erotic torpor and exultant tumult. Scriabin's working title for this score had been 'Orgiastic Poem' and Pletnev's performance fully lives up to that description. Again his pacing is moderate – magisterial rather than flamboyant. The orchestral playing of the Russian National Orchestra is once again all one could ask for, and is crowned with a magnificent trumpet contribution from Vladislav Lavrik . Unlike many other versions of the 'The Poem of Ecstasy' on disc its closing pages here benefit from an appropriately room-shaking organ recorded separately at St. Ludwig-Kirche, Berlin-Wilmersdorf.

It is very much to be hoped that this superb recording is a fore-runner of a complete SACD cycle of the Scriabin Symphonies for PENTATONE.