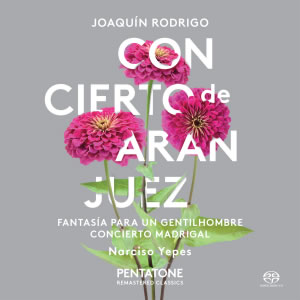 
The seeds were planted in the early 1970s when Deutsche Grammophon realised what amazing results could be achieved by recording on multichannel tapes, with either four or eight channels. Yet, due to a few restrictions, they never fully blossomed. Flaws in the playback equipment meant that music connoisseurs were prevented from enjoying these recordings in the way that artists, producers, engineers and other professionals intended, even though recording technology was already way ahead of its time.

Now - over a quarter of a century later - and thanks to the arrival of the multichannel Super Audio CD, there is finally a system available which permits this precious recording to be released in the quality it deserved back then.

Joaquín Rodrigo modelled Concierto de Aranjuez on Spanish folk music. A lyrical movement is framed by two fast movements - in the first two the musical material is fully developed, whereas the structure of the Rondo finale is more static. It was such a big success that it is considered as one of his most important works. To continue such an achievement, Rodrigo composed Fantasía para un gentilhombre, where he created a musical monument, so to speak, with two Spanish “gentlemen of the guitar” - Sanz and Segovia - skilfully presenting the ancient melodies with a modern twist. And Rodrigo based his Concierto Madrigal for two guitars and orchestra on Jacques Arcadelt’s madrigal “Oh, my happy eyes”. The composer neatly combines Renaissance dances with Spanish and African-American folklore in the 10 movements of the suite-like work.

Now on SACD, we finally get to enjoy Rodrigo’s music - with its astounding ability to bring about the feelings and visualisations of rural Spain and its romantic past - in the way it was meant to be enjoyed.

In the '60s & early '70s there was a posse of classical guitarists making recordings and travelling the world to play Rodrigo's music. A flurry of commercial advertising followed in its wake. Rodrigo's Concierto de Aranjuez was frequently heard on radio and seen on TV, so it and guitarists like Narciso Yepes, John Williams, Peter and Zoltán Katona, Angel & Pepe Romero and Julian Bream effectively became household names. This unforeseen burst of interest at all levels of society engendered many youngsters (including me) to learn the classical guitar, thus providing a potential new generation of guitarists.

That remarkable swell in interest of classical guitar music was probably due to a piece by a previously little known Spanish composer, Joaquin Rodrigo (1901-1999), written just before the outbreak of World War II. At the age of three his sight was almost completely lost during an epidemic of diphtheria, and this led him towards music as a compensation. After learning braille and music braille while pursuing his musical career, which started at age 8, he made first compositions in 1923, written in score by himself. It wasn't until much later in his life that he dictated them to a copyist (as did Delius).

In 1947 the young guitarist Narciso Yepes made his Madrid début, performing Joaquín Rodrigo's Concierto de Aranjuez with Argenta conducting the Spanish National Orchestra. This was an overwhelming success, bringing him renown from critics and public alike. By 1964, Yepes had completed work on his version of a 10-string guitar, an extension of the classical guitar and designed to overcome the many limitations of the usual six-string instrument when playing classical music. He was invited to première his 10-string guitar with the Berlin Philpharmonic, and he chose the Concierto de Aranjuez for that. This 1964 concert brought high publicity for the new instrument and re-launched Rodrigo's Concierto.

DGG's experiments in multichannel early in the 70's (issued in stereo) have been passed to Pentatone for a now familiar process of remastering at a high level. Pentatone's "Remastered Classics" has brought together three DGG issues of Yepez/Rodrigo in one multichannel disc. These had been released in stereo, paired on two vinyl issues, and later by DGG's version of remastering.

Joaquín Rodrigo’s Concierto is certainly one of the most popular concertos of all; its melodies have been sequestered by all sorts of instrumentations and genres. Aranjuez, south of Madrid, was the summer residence of both the Habsburgs and the Bourbons, renowned by the magnificent Royal Palace and tranquil gardens, and no doubt this pictured in the composer's mind. Yepes has been associated with the Concierto because of his mastery of the piece, throwing a new light on it with his 10-string guitar.

The light-hearted urbanity of the first movement has amazingly clear articulation, fluidity of expression and affection, with clarity in balancing counter-melodies above dark, sonorous lower strings. Naturally, Yepez caresses the gorgeous melodies of the Adagio, suggesting solitude and contemplation which is embroidered with a plethora of decorative trills throughout the movement . However, a burst of dissonant wind chords intrudes, which Yepez attacks in a furious passion leading to a true cadenza of striking virtuosity. This depth of feeling persists as the first melody returns, the guitar over-riding the orchestra's depth of tone with percussive clusters of flamenco-type resguardo (dry strumming).

Given the delightful direction of the third movement 'Allegro gentile', there is a tongue-in-cheek rhythm, of dance-like character, shifting between duple and triple metre. Yepez imbues gentle humour, grace and skilfull asides with the orchestra, which returns in kind. The Philharmonia, under Garcia Navarro, give Yepez impeccable support. The famous Philharmonia strings, however, sound rather thinner than usual; perhaps their numbers were reduced to help balance with the guitar. At times I noted an over-bright upper tinge of violins at loud crescendos.

Sonically, the DGG engineers have not made the ample ambience of Watford Town Hall too obvious in their 5.0 track, and Polyhymnia remastering has seen that there is bloom and good balance, with guitar not too close, but revealing all the tiny sounds which accompany guitar playing, from fingers on string to a richness of harmonics. This special character of the guitar sound is less obvious in the otherwise presentable Stereo track, as the acoustic bloom is reduced.

The next piece is the delightful 'Fantasia para un gentilhombre for Guitar and Small Orchestra', a frequent partner to the Concierto. We move to the Henry Wood Hall, London's first purpose-built home for orchestral rehearsal (based on a church). The whole sound is very different to that of the Concierto, with notably greater richness of the strings and wind of the English Chamber Orchestra, embedded in a strong atmosphere of ambience with deep perspective and focus. Some might find this capture somewhat distanced, but with the right listening volume I found it a realistic and pleasurable recording, with the guitar balanced in just the right spot. Rodrigo scores happy memories of the Baroque, whence the lute was being replaced by the guitar. Each of the four movements has its own delight, especially while the guitar and each section of the orchestra engage in discussion, with light dances and often well-known tunes - the Canario, for example. Silky strings from the orchestra, no extra brightness from the violins' upper range. For me, this is the most realistic recording on this disc.

The Concierto madrigal for two Guitars and Orchestra is, as one gleans from that title, another of Rodrigo's masterly neo-classical style, this time based on Jacques Arcadelt's madrigal “Oh, my happy eyes” (note the significance of this title to a blind Rodrigo). The composer neatly combines Renaissance dances with Spanish and African-American folklore in the 10 movements of the suite-like work. Yepez is joined by guitarist Godelieve Monden, a duo partner who often played duos and toured with him. Evidence of their joint musicianship is very clear, as is the transparency of their playing. With the Philharmonia and a return to the Watford Town Hall, this recording is much closer than with the Concierto de Aranjuez. In fact, the close-up solo guitars are positioned one each in the Left and Right speakers - a habit of DGG engineers of that period. Good for hearing the well-spaced exchanges from the guitarists but with the orchestra sounding very large, the balance seems very artificial.

In terms of remastering, another very fine performance of the Concierto de Aranjuez by Pepe Romero is that on the Mercury disc, featuring The Romeros and the San Anthony Symphony Orchestra/Victor Alessandro, with a good filler of Vivaldi transcriptions. Sonically this is vivid as a 3-speaker setup, but the result is perspectively flat, with a very large stage, filling out to both L and R speakers, and a somewhat small guitar in the centre speaker.

This is a crowded field in a number of media types. For the current SA-CD set alone, I would certainly recommend this Pentatone's Remastered Classic for its engaging Rodrigo programme, executed by the renowed Yepez - despite the variable sonics between items. Also worth looking at for Aranjuez is the John Williams and Barenboim disc - and I'm very partial to David Russel's distinguished and fresh recording with Telarc - but alas this was not made in SA-CD.

Listening to this disc brought wonderful memories of that posse of classical guitarists in my youth which I mentioned at the start of this review. They introduced me and many others to Rodrigo's music, which "went viral" in the '60s and '70s. My learning to play the guitar was also inspired by them, and while this was great fun for a few years, the realisation that I wasn't going to have anything like their skills prevailed.

I am so pleased that Pentatone have released a second SACD of great peformances with maestro Nariso Yepes.

I got this disc for my birthday this year and a great present it is. As with the previous release of Guitar Concertos on Pentatone with Yepes, I am again biased towards this great maestro.

The recording is very striking with a big open sound and at the same time capturing Yepes guitar up close, bringing the soloist right into your living room. Deep and resonant guitar tones are captured vividly in this quadro recording. Yepes guitar sounds almost jumbo sized at time.

The Fantasia para un gentilhombre is a colorful picture of a humble Spanish gentlemen and I cannot help but think that this piece has always been a self-portrait of Rodrigo himself.

The disc closes with the vibrant Concierto madrigal with Godelieve Monden providing strong support throughout this virtuosic showpiece. Yepes articulation is always first rate and fans of these concertos will have much to relish here.

With top notch sound and inspiring performances, this disc should bring a smile to lovers of these remarkable pieces.

(This review refers to the Multi-channel portion of this)