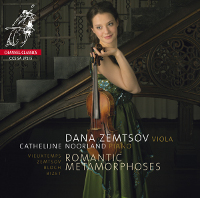 
The term ‘Romantic’ has always been something of a mystery to me due to its many and often subtle definitions. On this CD I invite the listener to re-explore this phenomenon, so often evident in day-to-day life, from different perspectives. T he programme takes as its point of departure the nineteenth-century classical romanticism of the beautiful ‘Sonata’ by Henry V ieuxtemps. This is the lyrical, sensitive type of romanticism so typical of that period. In contrast to this is ‘Suite for viola and piano’, Ernest Bloch’s romantically fantasized adventure through savage nature and tribes under the sun in the jungle. Waxman’s ‘Carmen Fantasy’, which probably needs little introduction, is a strong depiction of Bizet’s dramatic opera.

For me personally, however, the most ‘romantic’ and personal piece on this CD is the ‘Melodie im alten Stil’ by Evgeni Zemtsov. The nostalgic style in which this modern piece is written, with its lyrical melody, ornamented in Baroque style, imposed on fresh, contrasting harmonies, is just one reason to admire it. A second one is the story behind it: during his studies in Moscow the composer fell in love with a beautiful girl. She played the viola, and he wrote this beautiful piece for her instrument as a declaration of love. One year later their first child – my father – was born.

The young viola player Dana Zemtsov's first disc for Channel Classics, entitled 'Enigma' Enigma, works for solo viola - Dana Zemtsov, immediately confirmed her as an artist of immense talent and musical intelligence. On that disc she confidently delivered an exacting group of compositions for unaccompanied viola that challenged both listener and performer.

In complete contrast, her latest recording 'Romantic Metamorphoses' comprises a varied and well-chosen programme that explores the various manifestations of the word 'romantic' in musical terms. She is joined by the pianist Cathelijne Noorland who proves to be a sensitive and very capable partner in all the works heard here . The gorgeous 'Sonata in B flat major Op. 36 for viola and piano' by the Belgian composer Henri Vieuxtemps (1820-1882), that begins the programme, epitomises 19th century romanticism with its melodious and euphonious outpourings. The opening of the first movement (Maestoso) demonstrates Zemstov's rich singing tone while the main allegro also highlights the unforced virtuosity of her playing. The second movement is a beautiful 'Barcarolla' quickly followed by a short scherzando Finale, in which Zemstov's ripe sound is matched by Cathelijne Noorland's deft pianism.

A very personal family connection is provided by the short 'Melodie im alten Stil', a nostalgic and lyrical declaration of love, composed in 1968 by the Russian composer Evgeni Zemtsov who is the grandfather of Dana and father of Mikhail Zemtsov. Few could fail to be moved by its genuine warmth and touching simplicity.

Ernest Bloch's Suite for Viola and Piano won first prize in the Berkshire Chamber Music
Competition in 1919. The Suite represents the composer's romanticised vision of the Far East and though he originally appended picturesque titles to each of the work's four movements – (1) In the Jungle; (2) Grotesques; (3) Nocturne; (4) The Land of the Sun – he considered that the music was better served by the listener's imagination than any explicit programme. These titles, however, do give a helpful indication of the character of each movement. Dana Zemtsov and her partner deliver a searching and deeply felt account of this somewhat exotic and imaginative composition. They bring much wit and humour to both the acerbic 'Allegro ironico' and the cheerful chinoiserie of the 'Molto vivo'.

The final item is a performance of Franz Waxman's 'Carmen Fantasy', a pot-pourri of themes from Bizet's opera played here in an arrangement for viola and piano by Mikhail Kugel. Though usually the preserve of violinists this piece transfers especially well to the viola; the smoky tones of the instrument being ideally suited to the eponymous heroine's sultry music. Zemtsov and Noorland deliver a delightful account of the piece, combining seductive languor with expressive energy to just the right degree.

The recording was made in the pleasing ambience of MCO Studio 1, Hilversum (November2014) and Jared Sacks has achieved a marvellously realistic sound from both instruments that vividly brings these two players into one's room.