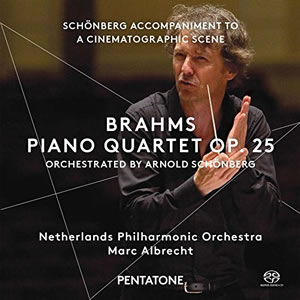 
Composer Arnold Schönberg considered it vitally important to study the techniques of other composers in order to thus penetrate more deeply into the true content of their music - and he believed the best way to do this was by arranging the original compositions. And thus between May and September 1937, Schönberg penned an orchestral version of the Piano Quartet in G minor by Johannes Brahms. His first reason was personal: “I like the piece.” But the other two were more of a practical nature. “It is seldom played. It is always very badly played, because the better the pianist, the louder he plays, and you hear nothing from the strings. I wanted for once to hear everything, and this I have achieved.”

In this regard, conductor Marc Albrecht and Netherlands Philharmonic Orchestra prevail, with individual instruments and sections coming forward in carefully drawn sections. It is a fun Quartet, and one that is brilliantly played by Albrecht and the orchestra. Furthermore, Albrecht’s style suits the composition, with its grand, impressive gestures and vivid colour to the music.When asked why he is so enthusiastic about the composition Marc Albrecht replies, “Schönberg’s contributions made it a true orchestral work: American with a Schönberg-like sound. It is a fantastic trip through an insanely good piece.”

Recorded at the orchestra’s impressive residence - the NedPhO-Koepel, formerly the Majella church - this album also features Schönberg’s own work, Begleitmusik zu einer Lichtspielscene (which translates as ‘Accompaniment to a cinematic scene’). Although the work reflected the customs of silent movies, Schönberg’s original score could not be used for film as it was not possible to adapt the music to the length of the scenes. The première was held in Frankfurt in 1930, without an accompanying film, and led by conductor Hans Rosbaud. Schönberg’s idea was not fulfilled until 1973, when three films by Jean-Marie Straub, Jan W. Morthenson and Luc Ferrari respectively were made to accompany the score.

One early manifestation of Arnold Schoenberg's admiration of Brahms as a progressive composer is his orchestration of the latter's 1st Piano Quartet Op.25 that he undertook in 1937. In a letter to the music critic of the San Francisco Chronicle two years after the premier Schoenberg gave a number of cogent reasons for undertaking his arrangement of the quartet.

“It is seldom played”

“It is always very badly played, because, the better the pianist, the louder he plays and you hear nothing from the strings. I wanted once to hear everything, and this I achieved.”

“My intentions: To remain strictly in the style of Brahms and not to go farther than he himself would have gone if he lived today.”

The second and third of these reasons would probably be generally untrue today while the fourth is often a matter of conjecture and debate engendered by the orchestrator's inclusion of a large percussion section ( bass drum, cymbals, glockenspiel, snare drum, tambourine, triangle, and xylophone) that is given its head in the fiery 'Rondo alla zingarese' finale. Be that as it may, the result is a hugely entertaining piece that combines the Brahmsian sound world with the piquancy of Schoenberg's orchestral palette.

Those seeking a recording of this work in high resolution sound have a choice between this superb new PENTATONE disc from Marc Albrecht and his Netherlands Philharmonic Orchestra or the 2009 version from Simon Rattle and the prestigious Berlin P O. Rattle has long been a champion of this piece, having recorded it twice, and, as well as the two works common to both these programmes, he includes Schoenberg's Chamber Symphony No1 – a substantial bonus. However, whilst the Netherlands P O may not quite possess the effortless virtuosity of the Berliners, they play with fierce commitment and tonal beauty for their Chief Conductor whose excellently paced performance is fractionally swifter overall than that of Rattle. Albrecht also avoids Rattle's occasional mannerisms in tempo and phrasing that, rather than illuminating the music, can become irritating.

When it comes to sound quality Albrecht wins hands down. The (stereo only) Rattle version recorded live in the Philharmonie has a wide but rather shallow acoustic presence while the PENTATONE 5.0 multi-channel DSD recording possesses both the richness essential for Brahms and also exceptional clarity and depth. The excellent acoustic of the orchestra's new home – the NedPhO-Koepel in Amsterdam, a former church – has obviously played an important part in helping the PENTATONE / Polyhymnia team to achieve such outstanding results.

Schoenberg's concise 'Begleitmusik zu einer Lichtspielszene' (Accompaniment to a cinematographic scene) Op. 34 is the contrasting fill-up to the Brahms work. In 1929/30 the Heinrichshofen publishing firm commissioned a score from the composer for use by the German silent film industry. Because the very idea of adapting his music to fit a film scene, rather than the reverse, was in total conflict with Schoenberg's ethos the score remained unused for that purpose. Schoenberg did attach an aphoristic scenario to the piece: “Threatening danger”, “Fear” and “Catastrophe.” but the listener's imagination provides the missing visual and emotional dimensions.

Marc Albrecht's taut performance of this fascinating piece is delivered with great sensitivity and careful attention to dynamics, while the luminous recording is tinglingly atmospheric.

This SACD is another fine addition to the burgeoning discography of the charismatic Marc Albrecht and his marvellous Netherlands Philharmonic Orchestra and can be enthusiastically recommended.

Are there other opinions of this disc? Graham clearly likes it and recommends it to others, I cannot make up my mind whether to buy or not. On-line clips do not inspire at first hearing and the NPO are not yet quite back where they were under Yakov Kreizberg from what I've heard of them in the Concertgebouw recently.

I guess I ought to say first off that I don't like the piece very much, particularly the 4th movement. Given Schoenberg's stated intention of staying within the bounds of what Brahms would have done himself had he lived to the modern age, the 4th movement has always struck me as the product of serious misjudgment or the ingestion of too many mind altering substances. I bought the recording, as I have a number of others, in the hope of having my mind opened, and on some levels it works. Albrecht doesn't meddle much, isn't fussy, keeps things moving and doesn't strive for effects. The orchestra plays well for him, and Pentatone's recording is beautiful, making the most of the sometimes none too pellucid orchestration. But I still don't like the piece much. The best performance I've ever heard was in concert by Neeme "take no prisoners" Jarvi and the New York Philharmonic back in the NYPO's bad boy days. That performance had nothing to do with Brahms, but at least it was exciting.