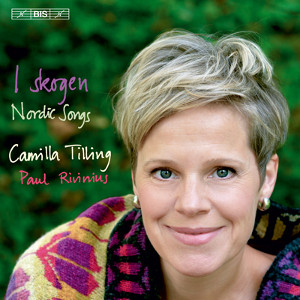 
Known to opera audiences world-wide for her portrayals of, among other characters, Sophie (Der Rosenkavalier) and Susanna (Le nozze di Figaro), Camilla Tilling is also a dedicated recitalist.

On two previous BIS releases, the Swedish soprano and her musical partner Paul Rivinius have interpreted Strauss as well as Schubert, to critical acclaim: 'Tilling takes her place among the leading Strauss sopranos of the day' (Sunday Times); 'a Schubert recital of rare pedigree' (Gramophone).

On her present offering she turns northwards, to familiar territory, interpreting songs by Grieg, Sibelius and Wilhelm Stenhammar. The disc takes its title from an early song by Stenhammar, I skogen (In the forest), and many of the selected songs are either played out in or depict natural settings, in a manner we are familiar with from Nordic composers.

Stenhammar's contributions are all settings of poems in Swedish, but even though Sibelius and Grieg are represented mainly with settings of German texts – with the notable exceptions of Grieg's emblematic En Svane (A Swan) and Sibelius's Norden (The North) and Skogsrået (The Wood-Nymph) – a tendency to give nature a musical leading role is evident.

The programme closes with a single song by Hugo Alfvén – Skogen sover (The forest sleeps) – which illustrates this perfectly: as the forest goes to rest in the white night of a Nordic June, her lover (the poet? the composer?) keeps watch over her.

Sweden is renowned for its production of world-class sopranos, and in the present wave are Camilla Tilling, Nina Stemme, Erika Sunnegardh, Annalena Persson and Miah Persson. This is the third BIS recording by Camilla Tilling. The previous pair are R. Strauss songs - Rote Rosen: Songs of Richard Strauss - Tilling, Rivinius and Schubert songs - Bei dir allein! (Schubert Songs) - Tilling / Rivinius. As well as her blossoming opera career, she obviously relishes performing songs accompanied with the German pianist Paul Rivinius. Within their three albums so far I have observed a steady improvement in artistry, musicality and partnership, from an already excellent start.

The new album has a theme; 'I Skogen' (The Forests), portrayed as a collection of Nordic Songs by Sibelius, Grieg, Stenhammar and Alfvén. In his well argued and insightful booklet notes to the disc, Martin Anderson shows that there is a major difference between songs originating from Nordic composers and those based on the late Romantic Austro-German Lieder. The Nordics tend to generate material so that it unfolds organically, the Nordic landscape is a foremost subject and this vast unforgiving landscape of forest is poetically thought to be mystic and lonely, yet it inspires great joy in poetical and musical aspects of the environment such as the onset of Spring. Austro-German art songs view landscapes from the drawing room, prepare material beforehand and take pleasure in the seasons.

Tilling and Rivinius present a cogent recital of Scandinavian songs which illustrate these features. It begins with Sibelius, whose whole output is deeply steeped in Finland's forests, part of the great Taiga (global boreal forest, from Turkic) which clothes much of the northern hemisphere. The bare name of the song, Norden (The North) Op.90,1 sets the scene immediately; leaves fall, lakes freeze and the migrating swans fly sadly to the south through desolate lands until they arrive in a land with palms, and only then do folk look up and marvel. The vocal line is marked "liberamente", and Tilling outdoes even Anne Sofie von Otter in floating and soaring with it, recalling a similar theme about the beginning of the Nordic world in Sibelius's 'Lunottar' tone-poem. Tilling's chilly voice is suspended over Riviniuss' lonely, tense stabbing piano accompaniment, syncopated and throbbing with monotonous chords which include a disturbing dissonance of an interval of a second, making an altogether eerie atmosphere, which is only resolved by a rich glowingly warm piano chord of C major in the song's last bar.

For his Op. 50 set of six songs (1917), Sibelius not only set it in German to satisfy his German publisher, but reverted to the Austro-German Lieder style which he had learned during his student days in Berlin. Tilling alters her voice convincingly for each of these songs, while Rivinius blends Sibelius's tricky and quite original accompaniments into the Lieder style. Grieg enters the stage with his Six Songs Op. 48 (1884-8), also returning to German texts after years of writing songs in Norwegian and Danish. This is one of my favourite Grieg song sets and I made comparisons between Marianne Hirsti with Rudolf Jansen from the Grieg Edition (Victoria). Hirsti sings beautifully, but she yields to Tilling's superior characterisation of each song, by vocal colouring and subtle word-painting, echoed empathetically by Rivinius with slight changes of pace, emotions and control of dynamics. I found this performance utterly delightful. Grieg also wrote a song using the Nordic symbol of a swan (Op. 25/2); this version probably reflecting a youthful requited love of his and thus full of nostalgia, as the swan is a Nordic death symbol. Tilling approach is hushed as if staring back into time, her response rising into an almost desperate crescendo.

Wilhelm Stenhammar's music is slowly being re-discovered, thanks mainly to recordings. Self-taught, it was difficult for him to attain the popularity of Grieg, Sibelius and Nielsen. He wrote about 110 songs with piano. First, Tilling presents his take on "I Skogen", looking at the flowers and trees and expressing joy, which swells and gently fades. From his Op. 26 songs, "The Wanderer" gives a dancing view of Spring; all its beauty is light and sweetness, while "Butterfly Orchid" is another rapt contemplation of flowers, but in a darker mood, although eventually bursting out into joy. "A ship sails" is a delightful dancing piece of folksiness about the problem of having a girl on board a ship as well as on land. Tilling unerringly finds the humour and folksiness of this artful song. In "Maid Blonde and Maid Brunette" is a splendid piece of take-off opera - almost a cabaret song in parts, and you can feel the duo having great fun with this song. The Stenhammar set ends with a ballade of deep sorrow and regret, "The Tryst" Op. 4,1.

Hugo Alfvén is not known for his songs, but here, like any good Swede, he too wrote about the forest. "The Forest Sleeps" enters with a high voice, almost prayerful in its lyrics, and there are impressionistic harmonic touches which could have been by Debussy himself. The duo's caressing performance is simply gorgeous. This made me wish for more of Alfvén's songs.

Presented in the finest BIS 5.0 multichannel and stereo modes (captured in the Bavaria Musikstudios of Munich), both recording and performance marry perfectly. They are supported by an impeccable BIS booklet of programme information and texts translated into English.

An album giving continuous enjoyment from selfless and invigorating music-making, truthfully recorded. Sit back and enjoy!

The sixth paragraph seems to suggest (?) that Alfvén was Norwegian. If so that is wrong. He was a from Sweden!

My comment refers to the John Miller review. I guess I'm not sure how these comments should be put. Since each comment has no obvious relation to an individual review the nature of comments regarding reviews risk being less rewarding for readers...

Thanks - I knew that but was getting tired after typing. Have corrected.
JM

Six Orchestral Songs of Greig are sung by Camilla Tilling on the (new) final volume of Greig music on Audite when she is accompanied by a full orchestra (WDR Sinfonieorchester, Köln under the baton of Eivind Aadland) so we have an interesting contrast of her styles with the solo versions supported by piano here. Happily she sings "A Swan" Op 25 No2 on both discs so a direct comparison is allowed. By any measure she is a truly outstanding soprano as her career success testifies but as much as I love these performances she seems much more at ease and alive with full orchestral accompaniment on the newer disc. Perhaps that could be through empathy and synergy with other musicians on top of their game. If you love this lady's voice then the Vol 5 Greig disc is a "must buy". 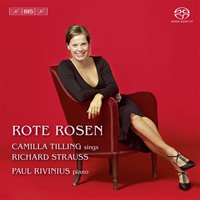 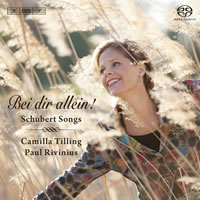