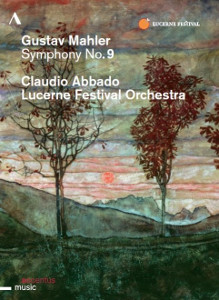 
Claudio Abbado and his hand-picked players of the Lucerne Festival Orchestra take their acclaimed Mahler cycle to a new level with this performance of the most complex and compelling of the symphonies, the intense, searching Ninth. Abbado brings all his renowned clarity of vision and the experience of a lifetime to this contradictory music – half valedictory, half life-affirming – and his “orchestra of soloists”, including some of the leading instrumentalists of our time, revels in the transparent textures and virtuosity of Mahler’s last completed symphony.

A magnificent testament to one of the great Mahler conductors.

In many ways, the overall concept has changed little over the near quarter century of time; arguably the technical quality of the recordings (and the halls in which they were made) have improved which helps reveal ever greater detail. It is interesting to note that many players from the 2004 performance went to form (under Abbado's direction) the Gustav Mahler Chamber Orchestra, which is the “backbone” of the Lucerne Festival Orchestra, together with past & present principals from the Berliner's, the Concertgebouw and other names more commonly thought of as soloists like Natalia Gutman & Sabine Meyer.

What is “new” is the level of tonal refinement combined with the cultured intensity of the playing. Even at Mahler's wildest moments, there is not one aural blemish to be heard; this is never at the expense of passion however for one is frequently staggered at the “perfect” delivery of such orchestral fierceness. In no small part the designers of the KKL Luzern must take great credit here for in many other venues, such emphatic & clearly articulated double bass playing would still sound (in the flesh) muddy instead the crystal clarity that the master acoustician Russell Johnson's Artec Consultants bequeathed the beautiful Swiss city. One only wishes that Berlin, Vienna, Amsterdam, London, Chicago and other cities with similarly talented orchestras could be granted such wonderful acoustics so as to not hamper their artistic efforts.

More than any other account, this partnership treads the line between making every fragment audible at the same time as making them a coherent whole completely persuasively. The faltering heartbeat seamlessly transforms into the main exposition of material quite magically and the playing endlessly evokes the ice-cold beauty of the sixth symphony and simultaneously that of the Second Viennese School, such is the rich but forward-looking approach adopted here. Such attention to detail could easily, in a partnership of lesser foresight, fall into highly neurotic playing but every nuance fits their overall conception: one might say that this is the aural equivalent of experiencing the stain-glass of Sainte-Chapelle, Paris where each pane may appear obtrusive on its own but coalesces into a marvellous “picture” that is quite beautifully dazzling.

Much of the staggering clarity in the playing owes a great deal to sections listening to each other – in general, the brass defer to the strings who defer to the winds (important exceptions apply). The only criticism of substance for the opening movement is that, by placing the violas instead of the second violins, a great deal of spatial, musical interplay within the string writing is lost to the listener – a price that some will be happier to pay than others. If there is a feeling that this is “too smooth”, I'd rather suggest that few - perhaps no - others manage to play these notes with as much care as here.

The second movement, although shorter is in some ways trickier with the more sudden changes of character and the decisions concerning how much irony with which to invest the ländler material. All tempo changes are perfectly prepared and, sudden though some are (as required), none come “out of the blue” because of the tiny inflections in characterisation which precede each transition. The relatively subtle opening leaves the unsuspecting listener unprepared as to the almost unrestrained savagery in which the “poco piu mosso subito” is attacked and each of these episodes is unwound with the utmost delicacy such that one almost doesn't realise this has happened until the next “mosso subito” section arrives. In the more reflective moments of this and the Rondo-Burleske, the tonal palette carefully reflects the earlier canon of Mahler.

There is so much heard in the Rondo-Burleske that is seldom achieved in the concert hall that one suspects a kind of musical alchemy is taking place on the part of the engineers. As anyone lucky enough to have witnessed this partnership personally will know that the magic is firmly happening on stage after enormously careful preparation but is tempting to believe that this is some form of musical wizardry at times! For this account does not set out to make any speed records but the space this gives the flutes for their flutter tongue colouration in the second subject and the sheer conviction with which all sections approach the fugal subject leaves no doubt as to their virtuosity; sometimes less haste has a quicker payoff! In the climax that presages the thematic material of the finale, Abbado and his orchestra do not explicitly seek to point out the similarity which makes the inclusion of this material all the more odd when viewed as a whole.

The great set of theme and variations that concludes this work is much more powerfully phrased than before. Despite the slow pulse (even for this movement), there is an unerring sense of momentum created by highly intelligent phrasing. The final pages are a real test for players and listener alike as Abbado stretches the tempo and the dynamic to very limits of tonal production and audibility. As these is a compilation of concert performances, what of the audience at this point in particular? They are are (rightfully) stunned into silence from the opening bars and make no sound until Abbado breaks the spell between each movement and (after a 2 minute reflection) the end of the work.

The sound is fortunately as exceptional as the music making, with real depth of tone & dynamic range that almost completely reflects that of the concert hall: set the volume “right” for the major climaxes and the final coda is so quiet that one feels scared to breathe normally. The layout of the orchestra is very convincingly conveyed and we are given “best seats in the house” position aurally speaking.

Turning briefly to the video aspects of this release, it is a high quality production with little in the way of visual quirks to distract one from the most important point: the music making. The only nod to gimmickry is the ability to choose to watch (only) Abbado for the entire performance - this is not the default mode. While Abbado is clearly unable to raise his hands as far as he once did, the expressivity & clarity of his direction is a joy to watch in and of itself. As with the 2004 performance on Blu-ray, as Abbado teases out the final coda, the hall lights are dimmed to mirror the collapse of the sound world in the score and the realisation of this on the platform.

Tremendous in every possible way and arguably the single most important memento of Abbado's many contributions to the cause of performing Mahler.

I believe this is the first release featuring video to be included on this site?

Great to see BDV titles being added and hopefully the Euroarts release of Mahler 1-7 BDV boxset by Abbado Lucerne will also be added to the site's library.

Quite the most moving recording of the Mahler ninth that I've ever experienced regardless of format.

Why is there so little Blu-ray video coverage???? Blu-ray video is my favorite HR format. This is my first visit to this site although I visited and contributed comments on the sa-cd site.

"Why is there so little Blu-ray video coverage????"

It's up to the reviewers here what they want to review. Also what discs are submitted by labels/distributors for review. 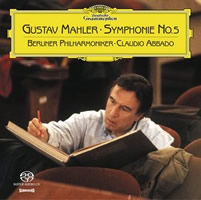 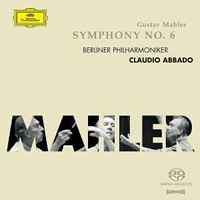 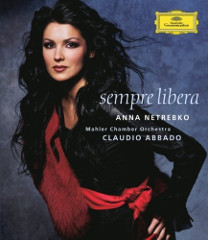