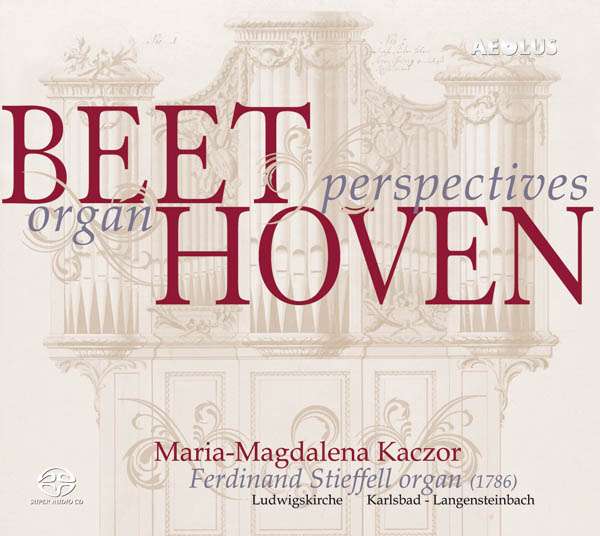 
«Beethoven ? But did he ever compose anything for the organ?»

We do not know the exact answer to this question. Yet the theme of Beethoven’s relationship to the “King of Instruments” has time and again occupied, indeed fascinated musicologists, but above all organists. Why is this? Is it the hardly conceivable idea that the composer only wrote very little for the organ and above all – compared to his work overall – little of note? To supply proof that Beethoven bequeathed us compositions that – if indeed not expressly composed for organ – nonetheless may outstandingly be performed on the instrument of his youthful years for which he like many young people felt considerable fascination: such is the aim of the present recording...

In other words: several of the works recorded can surely convey a stimulating impression of the type of music the composer may have played on the organ and perhaps even would have composed if he had remain involved with the instrument of his youthful period beyond the year 1792. Hence it is intentionally that we decided on “organ perspectives” as a title for this recording and not something like “organ works.”.

After having accomplished her piano studies at the Paderewski Academy in Poznań (PL) the young polish performer of this album, Maria-Magdalena Kaczor, has studied organ in France and Germany between 2005 and 2012, what predestines her for this recording project.

The organ we've chosen, built by Ferdinand Stieffel in 1786 for the rococo chapel of the Karlsruhe Castle, is since 1871 located in the Ludwigs(!) Church (St.Louis) of Karlsbad-Langensteinbach (near Karlsruhe). Not only is this an instrument that was also originally made for a Castle Chapel, but it was created in the same period of time as the organ at which Beethoven served as 2nd court organist. Its specification even reveals several analogies to the organ Beethoven used to play in Bonn, making it virtually self-evident as a convincing solution. The Langensteinbach organ may be considered the most significant tonal monument to late 18th-century organ building in the Baden region. Indeed, it has in the meantime been affectionately dubbed the “Pearl of Baden.” It's tonal colors have been thoroughly recorded for this hybrid Super Audio CD in stereo and multichannel surround. On this purpose Aeolus has used two independent microphone setups thus making the new recording an absolute MUST for the lovers of audiophile organ recordings.

The 48 pages full color booklet evokes aspects of Beethoven's relation with the „King of the instruments“, informs in detail about the history of the Ferdinand Stieffel organ and Mrs. Maria-Magdalena Kaczor's biography. It also contains of course detailed comments on the recorded works. Numerous color pictures and some historic photographs enrich this extensive documentation.

By the way, this is not the first recording by Maria-Magdalena Kaczor on Aeolus. There is a digital only album (live recording), which she shares with the organists Michel Bouvard and Andrés Cean Galan playing the historic Jean-Pierre Cavaillé organ of Saint-Guilhem le Désert (Hérault, France).

"Beethoven" and "Organ Music" don't go together in the minds of most music lovers. Even the popular biographies of Beethoven contain little or no information about his beginning to learn the organ at the age of 12, under tuition of the Bonn Cathedral organist. Later in 1782, a new appointment to Court Organist was given to Christian Gottlieb Neefe, another teacher of the gifted Beethoven, who made the boy his Deputy. In 1794, Beethoven was appointed as second Court Organist.

Did Beethoven write music for the organ? Some record albums suggest so; see 'Beethoven, The Complete Organ Music' by Wilhelm Krumbatch (Koch Treasure LP & CD), but since 1994 there has been much research which clarifies a confusing picture, and finds the answer: Beethoven strictly wrote only one or two pieces (he did, however, do many improvisations). There are, however, various prints or MSS of Beethoven which are usually marked WoO (Werke ohne Opuszahl - Works without opus numbers) which could have been for the organ, and another, larger, set which he wrote for Flute-Clocks, very popular at the time.

Enter Alba with this new collection, clearly assigning the MSS and WoO works to their likelihood of being played on the organ and playing the candidates in 25 tracks on an organ closest to that which Beethoven used at the Bonn Court. Their more honest title is "Ludwig van Beethoven Organ Perspectives". The chosen organ is an Early Classical, two manual instrument by Ferdinand Stieffell in 1786, housed in the Ludwigskirche, Langensteinbach, which survived the Second World War almost unscathed, compared with the Bonn Castle instrument that Beethoven played, which was destroyed. Details and photographs of both organs, together with their dispositions, are presented in the excellent 47 pages of the booklet.

The organist is a very enthusiastic Maria Magdelina Kaczor (b.1980). After basic schooling in Poland, she studied in France for some time, with many of the famous French organists, and expanded her career internationally, partly in continued training on master courses, winning competitions and holding concerts. Her fresh views of the 25 pieces on this disc make the best of what are generally very early and immature pieces by Beethoven, using the colourful array of stops on the Stieffell organ. It is very difficult to transfer the many Flute-Clock pieces to fully-grown organs, as their original performance is naturally mechanical, and the organist has to capture this, while at the same time using tempi and textures which are available on a real pipe organ. I was amused and impressed that the first piece, a Flute-Organ one, sounded exactly like any fairground organ of my childhood!

A set of Flute-Clock pieces from Beethoven's hand in 1799 are categorised as WoO 33, written in his first journey to Vienna, they are tunefully simple but artfully arranged for two or three parts. There are many 'cuckoo' echoes and a variety of amusing graceful dialogues of parts, which Kaczor plays with surprising changes in registration, including one stop which sounds like a wheezy chest underlining a perky flute tune. She puts a great sense of humour to work with all these stops, many of which have probably not been used in the organ's normal circumstances. Overall, her registration scheme echoes the mechanical's, dominated by soothing flutes at 8' and 4', but the ear craves more detailed information about the stops in use. It is a pity, therefore, that room in the booklet was not found for a table of the stops used for each track.

Flute-Clocks, common in public places or even large homes, comprise precision mechanical clocks combined with a small organ. The tunes are generated by a wooden notched barrel. The greatest were made in Vienna, their heyday being in the Age of Reason (or Early Classic) age. Viennese instruments managed to quieten the wheels and pinions so the tunes could be heard clearly. Tonal qualities of the pipes were much improved and the playing time was extended to 8mins from 5 mins, without needing to rewind the clock mechanism. Not only Beethoven wrote for them; Haydn and Mozart spent their time on them too. BIS has an interesting RBCD issue with modern organ performances of the Flute-Clock output of Beethoven and his teacher, Haydn (disc name "Flötenur"). One of these more powerful Flute-Clock piece by Beethoven used the advanced mechanical players, giving a more masculine impact; the 'Grenadier's March' (1803). Kaczor gives this a stirring show with fiery reeds and introduction of the 16' Bourdons which hints at a Spanish style. However, I rather doubt that there were many Flute-Clocks capable of outputting such full-on registrations!

Another group of tracks on this disc take some of Beethoven's early sketches or pieces which are immediately suitable for transcription to organ. Most notable are the Bagatelles, especially the Op. 33 set (1802, Vienna), simple little character pieces which he wrote from time to times during his career. These are full of charm, of the folksy and child-like sort, and again are invested with Kaczor's inventive registrations. Three Trios, once thought to be a Beethoven's original, proved to be by unknown transcriptors; two of which used pieces in counterpoint by CPE Bach.

Now to the original organ works in the strictest sense by Beethoven. A brief 2-part Fuge in D major (WoO 31, 1783) is a copy of this, where, in Beethoven's hand, "pedal" is indicated, suggesting that piano or organ could be used. The other more or or less certain Beethoven organ piece is 'Two Preludes through all the major keys' Op. 39, 1789, designated as "modulation studies" and clever but rather tedious.

On this Hybrid disc, only 22 tracks are on the RBCD layer, but on the SACD there are three "bonus tracks", exercises using JS Bach's organ themes for piano or possibly organ (1793). Kaczor makes these sound splendid, using full organ for the first time. They complete the SACD layer, lasting a very generous time of 89:13. The booklet states that these three bonus tracks can be downloaded for free "on music download platforms" from October 2015.

This is a very well-planned, attractive and well-executed issue, in the usual Aeolus Digipak, with three gates. The booklet is in English, German & French, attached to the third gate and well-illustrated with colour photographs and engravings of the organs discussed in the authoritative essays. Both stereo and multichannel tracks were captured with all DPA 4006 microphones, and the resulting sound is excellent, the arrays far enough from the organ to reduce the already small amount of keyboard mechanisms but making the most of the c.3 second reverb time. In multichannel, the pinpointing of the location of the pipe sets, particularly those near the back of the loft, give a very convincing three-dimensional sound picture.

This issue clears up the current understanding of Beethoven's output for organ, quite rightly using the term "perspectives". Kaczor's grace and enthusiasm for colourful registrations makes for an interesting set of organ pieces, even if musically they are not of great musical value. This is more a record for organ buffs rather than devotees of Beethoven, unless they are Completists. Nevertheless, recommended.