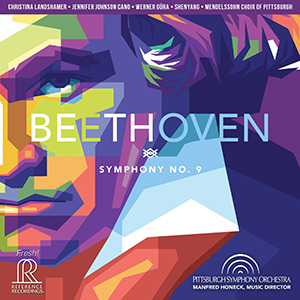 Marvelous transfer on SHM SA-CD by Universal Japan. Hard to believe this was recorded in 1959. Given the SHM program's philosophy of doing things all flat and transparent, it ...

The release is available today and I downloaded the multichannel version from "Native DSD" in the original recording format, DSD 256. As an aside, I had a discussion with ... 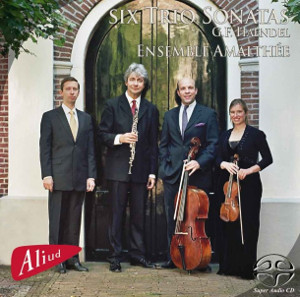 
In all likelihood these sonatas were written by Handel when he was around eleven years old, in 1696. At the time, he readily wrote for the oboe, which was, by his own admission, his favourite instrument; consequently, these sonatas were long considered to be works for two oboes; yet, the use of double strings in the first movement of the third sonata leads us to believe that the handwritten composition was for oboe and violin, two richly contrasting voices with complementary tones.

For the past four years and thanks to the Duke of Saxe-Weissenfels’ mediation with his family, Handel had been a pupil of the Halle organist Friedrich Wilhelm Zachow. This enlightened mind had already given him a very European musical culture, teaching him to compose and play the organ according to the different musical styles of the time. The trio sonatas HWV 380-385 are all composed following the model of the sonata da chiesa which had remained hugely fashionable since Corelli’s works: in four movements, slow-fast-slow-fast; they demonstrate a very strong and rigorous knowledge of counterpoint.

The performance of these sonatas by L’Ensemble Amalthée aims to showcase the characteristics of the works as much as possible while acknowledging in them the fusion of various European musical trends already felt by Handel: the art of ornamentation, that of pedalboard and the different articulations…

We may well never find confirmatory evidence that the six Trio Sonatas HWV 380-385 were written by Handel at the age of 10-11. There is no autograph (suspicious, as some musicologists say). Carl Friedrich Weidemann, flautist in Handel’s opera orchestra is said to have shown the sonatas to Handel, who reportedly leafed through them and exclaimed with wry amusement "I used to write like the Devil in those days, but chiefly for the hautbois, which was my favourite instrument". Since there are no other contenders for the Trios, most musicians go along with child Handel as composer, noticing that the movements, although composed with remarkable wealth and boldness, lack the greater maturity and exploratory nature of Handel's output from his later years. In early editions based on the first copy, the Trios were published as 'for two oboes and continuo', but the writing for the first "oboe" is more suggestive of a violin, and the presence of some double-stopping episodes marks the violin as correct for the first part.

The six Trio Sonatas follow the model of Corelli's Sonata da Chiesa, with four movements, slow, fast, slow, fast; a very popular form in the Baroque. It is a common mistake to assume that the 'da Chiesa' works were part of religious ceremonies. Many public concerts were held in churches, and around 1700 there was a tendency to merging of Corelli's 'da Chiesa' and 'da Camera' forms. One feature of the 'da Chiesa' Sonatas was their use of an organ as continuo, as opposed to harpsichord for 'da Camera' Sonatas'. Ensemble Amalthée have elected to use an organ, as they were recording in a church.

Joris Van den Hauwe (oboist) and Caroline Chardonnet (violin) are respectively principals of their instrumental groups in the Brussels Philharmonic. Cellist Godefroy Vujicic is an advisor for studies at the Paris conservatory, and Olivier Chardonnet performs regularly as an international guest organist. Ensemble Amalthée's laudable missive is to take the small and rarely performed repertoire for violin and oboe to intimate venues and summer festivals, where they like to interact with the public during performances. On the evidence of this disc, their combination is winning.

Their instruments are modern but played with a deep knowledge of Baroque playing techniques, particularly using vibrato very selectively, and their use of ornamentation adds conspicuously to the flow of their contrapuntal lines. Many of the movements involve canonic discussions between violin, oboe and cello (the organ is mostly chordally supportive), and these could become tedious, but here subtle variations of timbres in the staggered themes really bring the contrapuntal lines to life. Their whole approach is of lightness and freshness, with a rhythmic pulse that is almost dance-like. Slow movements have a noble dignity or reflective nostalgia, while allegros scamper away with twinkling delight.

Recordings of the whole set of Trio Sonatas are scarce; one the most favoured since the late 90's is Hyperion's, played by Convivium, also with modern instruments but with a harpsichord as continuo. This extra ornamentation and addition of some 'sparkle' might attract some listeners, but I found the more subdued and unobtrusive support of the organ better outlined the innocently simple Baroque themes as done by Ensemble Amalthée. Convivium's performance is very good indeed, but they are more robust then the Ensemble and the top end of the violin's range is thin and rather piercing. However, they also include another "wandering" Trio Sonata for Violin and Oboe from later Handel, whereas the Aliud recording has no filler (time = just over 57 mins).

Aliud Record's Jos Boerland recorded in the Doopsgezinda Kerk, Joure, a small Baptist church in Netherland with a co-operative resonance which adds bloom to the music. 5.1 and Stereo microphone setups for DSD capture were the simplest possible, as you can see from the double centre page colour photograph of the setup, and the result for both tracks is exemplary, better than the Hyperion's rather closer approach, which is less "real".

An attractive booklet (designed also by Boerland) has programme notes and brief biographies, and a list of stops of the church's Van Dam organ (1858), with an enlightening table of registrations for each movement of the Six Sonatas. Interestingly, most of the slow movements were underlined by a 16' Bourdon (for gravitas), while the other movements were mostly supported by an 8' Hohl Flute (for liveliness).

This disc is a gift to Baroque music lovers; even if not by the pre-teenage Handel, these trios are eminently worth exploring.