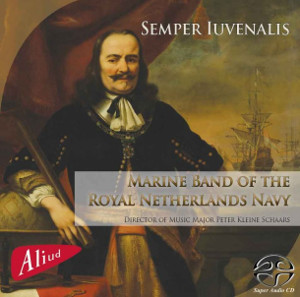 
On August 1st 2015 it will be 70 years ago that the Marine Band of the Royal Netherlands Navy (Marinierskapel der Koninklijke Marine) was established. The originally informal 18th century ship’s bands developed through the years via the formal Regimental Band of the Royal Netherlands Navy (1874-1940) into an internationally leading military band.

This platinum jubilee coincides with the 350th anniversary of the Marine Corps (1665-2015), an organisation belonging to the oldest branch of military service of the Netherlands: the Royal Netherlands Navy established in 1488.

As early as the 17th century in the days of Fleet Admiral Michiel de Ruyter one of the initiators of the Marine Corps, music has played a role in the navy. Besides using it to pass through commands, signals and for recruiting ships’ crews, it was ideal for moving groups of people (soldiers) to the cadence of musical genres with a duple time sense of rhythm: the military march was born. Marching was made more pleasant by an often cheerful and recognizable melody, improving morale and at the same time giving the column an impressive appearance through the uniform movements.

This military marching music also developed into marches destined for entirely different purposes, like commemorations, celebrations or for amusement. According to the occasion, the tempo and key were adapted: from slow to (very) quick, cheerful or of quite a plain nature. Examples of this are, among others, the funeral marches, procession marches, inauguration marches and dance and circus music. At the same time a genre emerged that could be performed on stage, the concert march, giving the traditionally non-marching symphony orchestra occasion to programme this music. A few of these pieces of music, well-known and loved by the public in general are; the Radetzky March by Strauss, the Pomp and Circumstance Marches by Elgar, the Stars and Stripes Forever by Sousa and the Florentiner March by Fučík.

Welcome to the 70th Anniversary of the Marine Band of the Royal Netherlands Navy! This large, versatile symphonic wind band celebrates their Platinum Jubilee, which coincides with the 350th anniversary of the Netherlands Marine Corps. A collection of marches, the highlights of military music, shows off the band's unbeatable playing under the baton of their Musical Director Peter Kleine Schaars.

In tracks 2 and 3, the Drums and Fifes of the Royal Netherlands Marine Corps pay a visit, playing traditional Royal Netherlands Navy signals, which are each taken over and developed by the full Marine Band. The massed drums and fifes sound splendid, reminding us of the importance of music in early Navies as a means of passing orders and instructions to the troops.

The booklet article by Commandant General Royal Netherlands Marine Corps R.G Oppelaar presents an interesting summary of military music, in terms of passing orders and affecting the psychological state of listeners. He also explains the choice collection of international and maritime marches of all speeds on this disc. Many of the marches are by composers and arrangers only well-known by members of the band fraternity, but some of them are heard on concert platforms. The march king, John Philip Sousa, is of course represented, not by one of his ineffably popular marches, but the cheerful 'George Washington Bicentennial March'. Jacques Offenbach is not notable in military music circles, but it is his theme in the 'United States Marine Corps Hymn', arranged by 'anon' - and a splendid tune it is too.

The sound of a large symphonic wind band (I counted 52 professional musicians from the booklet in this case) is a challenge to the recording process, with the possibility of sonically spectacular results. Alliud's use of native DSD provides realistic timbres from the wind instruments and percussion, but of course the sonics of the venue and microphone placing are important in the final capture. This recording was made at Van Ghentkazerne Korps Mariniers, Rotterdam in a venue which is rather drier than the Marine Band's previous splendid recordings (When the Swing Marches On - Schaars, Marine Band of the Royal Netherlands Navy plays Sammy Nestico). In 5.1 mode, I found a relative closeness of the trumpets and cornets in the left half of the sound stage, with clarinets, oboes and percussion in the middle, but few distinct instruments, except for the deep euphoniums on the right. This imbalance was irritating, as I kept thinking my speakers had gone out of phase, but not so. In stereo mode, however, the left to right sound stage was evenly populated with instruments, set somewhat further back in the ambience (which seemed to be more evident than in 5.1). I much preferred the stereo track, which provided a very clean rendition and notably deeper front-back perspective.

Obviously this disc is aimed square at the Band's fans in the Low Countries, although they have an international audience too. The programme is performed with panache and a wide dynamic range, and there are very good arrangements, full of colour and inventiveness. Recommended.

Stereo sound about four stars, not five as per review.