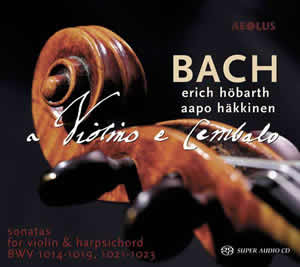 It was high time for a complete set of Bach’s sonatas for violin and harpsichord. Aeolus found the niche in the market, releasing on two SA-CD’s all 6 sonatas plus two with basso continuo and a further ‘stand-alone’ sonata (BWV 1022).

The violinist, Erich Höbarth, has been a member of the ‘Quator Mosaiques', with which he has won several awards, and was during the 1980’s Konzertmeister of the Vienna Symphony. First rate credentials, one might say.

His younger partner, Aapo Häkkinen, a former pupil of Bob van Asperen at the Amsterdam Sweelinck Conservatory, has already built up a considerable reputation as a soloist and conductor in numerous countries. For the Aeolus label he recorded 2 volumes of Bach’s harpsichord concerti with his own Helsinki Baroque Orchestra, which were well reviewed by John Miller in 2013.

His instrument, too, deserves special attention. It was built in the 1970s and belonged to Igor Kipnis until his death in 2002. It is based upon the latest and most sophisticated Hass double manual. My first complete set on cassettes (!) was with Kipnis on this very same instrument (I have forgotten who played the fiddle) and I was looking forward to how it would sound in DSD Hi-Res format.

However, and contrary to my high expectations, the result is mitigated. The opening Adagio of BWV 1014 sets, most unfortunately, the wrong tone. Not so much because of the slightly wavering violin, (though not like the somewhat hesitating and not always tuneful Lara St. John in her interesting but incomplete version with harp), but rather the unrealistic and out of focus recording.

The harpsichord seems and sounds twice as big as it actually is and the balance with the violin is not optimal. From the Allegro onwards it gets better, much better. But there is another problem: The multi-channel mix is difficult to detect. It’s more a diffuse matter coming from ‘Everywhere & Nowhere’. This is a real drawback for those who prefer and are able to listen in multi. But even so; put in stereo mode, the sound spectrum remains muddy.

Comparing with Channel Classic’s RBCD with the duo Pinnock/Podger is revealing. The sound quality is a street length ahead. Both instruments are far better defined. One wonders what the origin of the recording has been. The packaging and the liner notes breathe great and special care, but as to the recording no more is given than the standard information that ‘these “hybrid” Super Audio CDs will play on all CD players and SACD players. CD audio: Stereo. SACD: Stereo + Multichannel Surround’. Not where, when, or by whom the recording was made. The disk itself bears all the logos, including DDD.

It is a pity that the recording does not do full justice to both players, who do an excellent job. Häkinnen’s very competent playing on the harpsichord, allows Höbarth to excel; drawing beautiful tones from his 1683 Guarnerius filius Andreae, displaying outstanding virtuoso and most enjoyable flexibility in the various movements of these sonatas.

Disregarding the opening adagio, I can give a conditional recommendation for those who are content with roomy, yet undefined sound; multichannel aficionados may want to wait for another, better defined, and more detailed recording of these wonderful sonatas.

Although a fine account by any means, especially Häkkinen’s harpsichord playing, Höbart is hardly the most exciting player of these wonderful sonatas there is.

I agree with Adrian Quanjer concerning the sound too. - The Channel Classics recording with Rachel Podger/Trevor Pinnock is by far much more musically interesting, and better recorded. For a non-SACD my favourite is the Glossa (2016) double CD with Leila Schayegh (vn.) and Jörg Halubek (harpsichord). 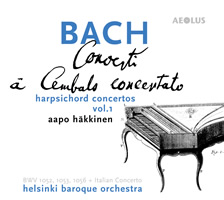 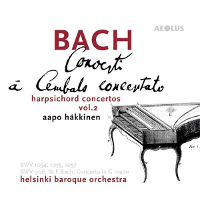 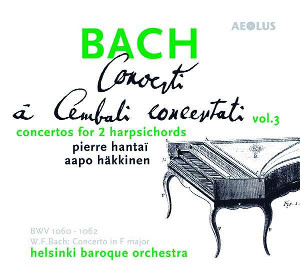