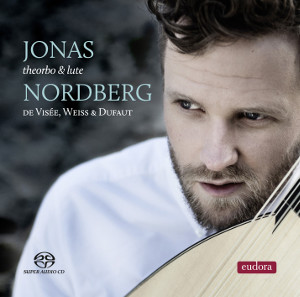 
For his début solo recording, Swedish lutenist Jonas Nordberg presents a delightful selection of works for Baroque lute and theorbo; the grandeur and elevated spirit of the French Baroque music of Dufaut and de Visée alternate with the refinement and extraordinary originality of the works of Silvius Leopold Weiss, who was regarded as the finest lutenist of his time.

Jonas Nordberg, who has recorded for BIS three CDs with recorder virtuoso Dan Laurin, gives personal and intense performance of these pieces, recorded in the gorgeous acoustic of the 13th Century Spanish church of San Francisco, in Ávila.

De Visée, Weiss and Dufaut are not exactly household names for the average classical music lover. And I must admit that I’m not exactly a specialist in this field. However, I see that as an advantage, because I have no idiomatic ‘hang-ups’, allowing me to listen with unbiased interest.

The liner notes, provided by the soloist, give ample information about the works, but nothing much about the composers. Reason for me to elaborate (dates are approximative).

The main composition is no doubt the ’Five Pieces’ by Sylvius Leopold Weiss ( 1687-1753) of Polish/German origin. In the first half of the 18th century he was one of the foremost lute composers of his time, as well as a prominent lutenist. In our time his compositions are widely recorded and they provide staple food for many self-respecting lute players.

In Super Audio CaroMitis released a transcription for harpsichord of another suite (Prelude, Allegro, Allemande, Courante, Gavotte, Sarabande, Bourree, Gigue): Harpsichord Gems Vol. 2: The Great Transcriptions - Martynova, whereas Channel Records recorded a (duo) guitar transcription of his Sonata in A major (Vivaldi - Katona Twins). Here we can enjoy some of his extensive compositional oeuvre in its ‘original’ version, and the only one available in high resolution at that.

This said the transcriptions are by no means far-fetched. As far as the lute is concerned, Weiss is at a comparable level to Vivaldi and Bach. There is even evidence that Weiss met J.S. Bach on several occasions and that mutual inspiration may have taken place.

The two other composers are now firmly established in the French cultural heritage, one of them, Robert de Visée (1655-1733) being one of the small group allowed access to the ‘chambre du roi’, his private quarters in Versailles. For the ‘monde francophone’ it is self-evident that the king in question is no other than ‘Le Roi Soleil’, Louis XIV. The other one, François Dufaut (1610-1672) or Default (in French the pronunciation is the same) is less well known, or should I say less well documented. Recent discoveries, however, have brought his music back on the scene.

A question one may ask, and I’m certain many do and have done so on many occasions, how important is it to have only one instrument recorded in high resolution, let alone multi-channel? Does one hear the difference with RBCD? Without going into much detail, I share the view of those who, at least believe, that it sounds better. As I commented elsewhere, listening improves by learning how to listen. I agree that many people have different reasons for not being too concerned about it. That’s their good right. But those who care about music, really care about music, appreciate it that companies such as Eudora, provide the attainable very best. A minority? I’m afraid so.

High resolution is all about detail and timbre. And that is just what we hear abundantly on this disk. Every note can be pin pointed; one hears the fingers on the strings. The discrete surround (which in fact copies the reflection one hears in a hall, or, in this case, a church) creates lots of ‘air’ around the music, making these pieces a very relaxing joy to listen to.

Of course, it’s not all about sound. It’s the quality of the playing that lies at the basis of this exciting experience, or, if one wants to go one level further back: the ingenious and lovely character of the compositions themselves.

Leaving the technical merits of Jonas Nordberg aside, it is obvious that his delicate and precise playing does more than let you listen to the music as it was meant to be. It opens up a whole new world. It brings you back in history, to a time when people still had it. Far away from today’s rushing life, the ram-bam-boom of the now popular groups for the youth (and well beyond, I might say); this was the ultimate in ‘divertissement’ in those days.

Under the carful hands of Nordberg, the music is reflective and yet addictive for all lute (and theorbo) aficionados and at the same time most instructive for all those who want to know more about it and are willing to let themselves be carried away in a well-chosen spiritual combination of music, culture and history.

The versatile Jonas Nordberg is a new member of Sweden's small coterie of period plucked-instrument players, such as lutes, theorbos, archlutes and Baroque guitars. He graduated from the Universität Mozarteum Salzburg with a Master's degree in 2011 and the Royal College of Music, Stockholm, and is now in high demand for solo recitals and ensemble work.

He also has an extensive collaboration with choreographer Kenneth Kvarnström, resulting in several large scale stage works in recent years. This involves a meeting between baroque music and contemporary dance, giving the music a new dimension, a visual chamber music partner for solo pieces and a way to communicate to the audience through physical gestures and impulses. In 2013 Nordberg and Kvarnström cooperated in a critically acclaimed duet, "Sofa(r)", combining elements of dance, baroque music for lute and theorbo, electronic music and speech in a dark work exploring death. This also marked Nordberg's début as a dancer.

After a very successful disc for BIS, in which Nordberg was Baroque guitarist in an ensemble playing Johan Helmich Roman's Flute Sonatas, Eudora now presents his first solo disc, with theorbo and lute. Only a handful of virtuoso players of the theorbo (a much magnified lute with very long bass strings) wrote solo repertoire for their instrument. It is a delight that Nordberg has chosen to include several significant pieces for this difficult instrument with its own form of notation. There are few recordings of solo theorbo, as the instrument was mostly found in the continuo bass of various Baroque ensembles. This is a pity, for double stringing on the fingerboard means that the theorbo retains much of the colour and subtlety of the lute. The long single bass strings also give the theorbo a very powerful bass register, not to mention a whole gamut of resonances.

In "Tuning in", Jonas Nordberg's astute notes in the disc's booklet, he lists some reasons why his 11-string lute and 14-string theorbo give very different listening experiences compared to those of modern instruments. They are very light weight, with low-tension strings and little sustaining, and a low dynamic range (except for the theorbo's bass strings), requiring intimate venues. Nordberg states his ideal listening position to be at least several metres from the player, where subtleties of phrasing and articulation are clear, and in a warm, generous reverberation. All this is accomplished by Eurodora's engineering in the Auditorio San Francisco, Ávila, in Spain. In both Multichannel and Stereo, the recording is simply impeccable, caressing the listener with the full realism of theorbo and lute and, yes, some of their quirks.

Nordberg has chosen two suites by the French theorbist Robert de Visée (ca. 1655 – 1732/1733), a follower of Lully and member of the French Court. In minor keys, they tend to bring the standard Baroque dances to a more contemplative mood, particularly in the first suite, in A minor. Nordberg's notes describe his own descriptions and feelings of the music in considerable detail, and are well-worth reading before listening. For the lute, there are 5 pieces from Silvius Leopold Weiss (1687 – 1750), a court lutenist in Germany and author of over 600 lute pieces, and a Suite by François Dufaut (1604(?) – ca.1672?) in which he uses the style brisé, with broken melodic lines, elaborate textures - almost an improvisational style in this inward-looking piece. Nordberg conquers all the technical difficulties in Dufault's splendid works, which are rarely brought before a microphone.

As a fine summation of the solo capabilities of the theorbo, Nordberg concludes with a piece by Robert de Visée, 'Tombeau des Mesdemoiselles', which he declares to be his favourite. A Requiem without words, it is supposed to have been written in memory of de Visée's two daughters. As Nordgren says succinctly, this piece is "a work that beautifully conveys all the different aspects of mourning". His performance is deeply moving, displaying the piece's elegant sensitivity.

I enjoyed this disc so much, I'm putting forward a request for another by Jonas Nordberg, this time with Kaspberger's theorbo solos from Germany and perhaps those of Caspaldo from Italy. Empathy and rapport distinguish Nordberg's first solo disc. If you've never heard a theorbo (or a lute, for that matter), here is a very fine SACD to try, with state of the art in sound (DSD256 - 11.289MHz capture, DSD master).