It all boils down to a lack of an indisputable standard being set for SA-CD recording by Sony / Philips when the DSD format was promoted as a way of extending their ... 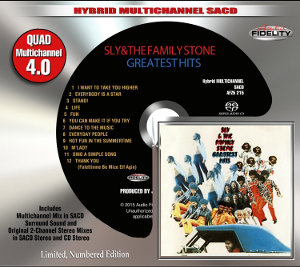 
If ever a greatest hits album lived up to its name, it's this one. Decades after its original 1970 release, Sly & The Family Stone's Greatest Hits remains as thrillingly irresistible as ever, spinning off one indelible classic after another--"Dance To The Music," "Everyday People," "I Want To Take You Higher," "Stand!" and more. More than hits, they are high points of American popular music, every one of them. One of the greatest party records ever made!

The influence of Sly & the Family Stone has been immense in popular music. Led by Sly Stone as chief songwriter and producer, they combined elements of rhythm & blues and soul music to move forward as pioneers of funk and psychedelic soul in the late 1960’s. Their enormous impact extended to their contemporaries like The Temptations and later artists such as Prince. "Greatest Hits" includes songs recorded in 1968 and 1969 that are pearls to be cherished in what Rolling Stone magazine ranked as No.60 in it’s list of the 500 Greatest Albums of All Time. This is a group of recordings of era-defining music.

"Greatest Hits" was originally released in 1970. Included as part of the original release was a quadraphonic version that Audio Fidelity has now licensed and released on SACD. Simply put….. this Quad 4.0 presentation is nothing short of a revelation! But, in listening, it is important to note these original Quad source tapes have been mastered at a very low volume and Gus Skinkas performs an excellent 4.0 Analog to Hi Def DSD Digital Transfer. I increased the volume by a significant +6 dB that opens up the dynamic range as it blossoms into astonishing high quality audio. For my part, it is a very pleasant surprise to hear such quality from early quadraphonic master tapes.

I spent a considerable amount of time listening to the Quad 4.0 before committing to a review. It is so enjoyable to listen to an old quadraphonic mix where the focus is an excellent balance between front and rear channels. What is quite impressive on this Quad SACD is the formulation of a nice bottom end in the rear channels with placement of bass and drums that, rather than being a distraction, push you into a highly immersive surround field. The lead vocals tend to be mixed in different channels (not centred) that mirror the frequent use of multiple lead vocalists within a song (a technique often employed by the Family Stone). Although you may hear vocals and instruments coming at you from different channels, everything is placed where the listener is approximated at the centre. It is all about the ‘balance’ and the credit belongs (according to the liner notes) to the original remix engineer, Larry Keyes for the superb Quad mix. While I may question a few of the remixing decisions (placements), only once, on the song “Stand!”, did I hear the quadraphonic sound slump as Sly Stone’s lead vocals are placed in the rear right channel that comes off as ‘soft’ when set against the strong background vocals emanating from the front.

Larry Keyes also deserves credit for the relatively consistent sound of the recordings since they are derived from different recording sessions for this greatest hits package. It is quite an engineering feat of remixing for this homogeneous 4.0 presentation. (As an additional note, the internet site 'Reeves Audio Recording' credits Jim Reeves, not Larry Keyes, as the mix engineer for the original Quadraphonic release of Sly & the Family Stone "Greatest Hits").

The fidelity of the various recordings is exceedingly good. On the track “Dance to the Music”, there are four co-lead vocals (Cynthia Robinson, Sly Stone, Freddie Stone, Larry Graham) exchanging turns with excellent separation between channels and clear tones in the vocals for a very creative multi-channel effect. Sly Stone plays the Hammond Organ that abounds with an intoxicating and ever-driving force of bright, prolonged high notes. But it is the playing of Larry Graham on bass in his ‘thumpin and pluckin’ style that is essential to this song. The bass has a deep, firm tone and when Graham sings the lyrics “I’m gonna add some bottom”, he follows immediately by playing a striking distorted fuzz bass line emitting from the left front channel that is gritty in tone and feel. Dance to the Music is indeed one great song.

We all have favourites and from the recordings by Sly & the Family Stone, “Hot Fun in the Summertime” is not only my choice but it ranks in my top ten rock songs of all time. It is a song about joy in celebrating the idyllic times of summer and although it may seem simple in nature, it has such a profound personal effect as it floods me with memories of those special moments from this season. The song has a beautiful melody with strong co-lead vocals between Sly Stone and Rose Stone that are uplifting and expansive as they rise energetically in the midrange. It is, however, the play of Jerry Martini on tenor sax and Cynthia Robinson on trumpet that brings forth a vibrant dynamic in the upper range extending the exuberance laid out by the vocal performances.

This SACD release also contains a Mono version mastered by Steve Hoffman. As discussed at length on the Steve Hoffman Music Forum (under thread Sly & the Family Stone - Greatest Hits), an authoring error occurred on the SACD Mono with an imbalance toward the left channel. As noted on this Forum, Audio Fidelity (internet site) can be contacted about a full refund or replacement of the SACD disc. I did listen to the CD layer in Mono and it sounds very good. However, in terms of relative importance, the Quad 4.0 is without a doubt the shining star on this release.

Sly & the Family Stone were true innovators and “Greatest Hits" captures an extraordinary time in musical history. The Quad 4.0 is a powerful aural experience. I reiterate the dynamics have been preserved on the quadraphonic tapes by mastering at a low volume so please turn up the volume level to take advantage of the great sonics. It is a classic album matched by classic surround sound. From my point of view, this SACD release is an essential purchase.

I have listened to this through now twice in both mono and multichannel, and I can't recommend it at all. It's one of the worst SACDs in my collection (700+). The music is great, iconic. But the recordings are so poor that I doubt anything much could be done in mastering. I will say that I am completely unfamiliar with their catalog - I've only ever heard the music on the radio, etc. So, perhaps, this is a big improvement over what's currently available. But compared to other recordings of this period (1968/9) these tracks sound very flat, with little in the way of dynamics, and no clarity of soundstage. I was really looking forward to this too.

Well, I dont know how rreviews can be so different.

This is a great release and I really enjoy the quad mix. It is so good to hear the great dynamics in the recording. I love to hear drums in a recording like the sound live in a room. You just dont hear that anymore

Rick, read your review, really good, used it to help another at QQ.

Here's a bit more detail on the authoring issue with this title;

"AFZ5 215" has a defective SACD(MONO) layer - There is an authoring issue on the DSD layer only which caused the L and R channels to be slightly out of sync (thus sounding imbalanced). The CD(MONO) layer and the SACD(Multi) are AOK.

The first attempt at correcting the defect was issued as Cat # AFZ5 215-2 but was not successful.

The second attempt at correcting the defect was issued as Cat # AFZ5 215-3 and fixed the problem - So if you are interested in playing the SACD(MONO) layer this is the one to get.

As a further complication, whilst the Cat # was updated on the label side of the disk, it was not updated on the slip case - so you need to check the disc to establish which version it is.

Nb. Given that AF were only replacing defective disks upon customer demand and don't seem to have recalled defective disks from retailers once the problem became known it is probable that the "3" disk is fairly rare.

This SACD marked the first appearance of several tracks in a non-Mono mix. When this Greatest Hits package was originally compiled, the stereo masters for Hot Fun, Life and Thank You Falletinme Be Mice Elf could not be located.