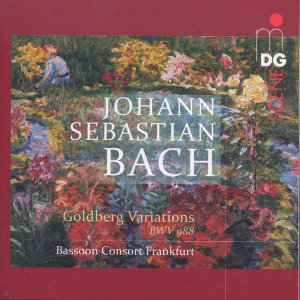 
Bassoon Bravura
The Frankfurt Bassoon Consort is formed by eight bassoons and a contrabassoon. Its guiding spirit Henrik Rabien has arranged Bach’s Goldberg Variations for this unusual ensemble – a daring feat whose success has been undisputed ever since the acclaimed première in May 2013. Rabien’s arrangement goes far beyond pure instrumental navel gazing: the nine instrumentalists produce tonal refinement most excellently harmonizing with Bach’s virtuosic play between linear counterpoint and vertical harmony.

Orchestral Opulence
Unlike many other arrangements, Rabien’s work systematically maintains the original key of G major/G minor. The instruments merely require transposition down by an octave – with a sensational effect: the contrabassoon contributes a profound bass without its equal! This particularly lends what is absolute orchestral opulence to the fully instrumented variations, and in the more intimate parts the extremely flexible playing of the versatile continuo player also makes for pure listening pleasure.

Elemental Excellence
Rabien employs his instrument from the duo to the nonet. Variations of genuinely breathtaking virtuosity that one would normally not think of entrusting to the bassoon alternate with cantabile parts in which the instrument is completely in its element. And when in the concluding quodlibet fine art intertwines the two folk songs with the aria, the bassoon also makes its humorous appearance. One thinks
that one can hear the old Bach chuckling!