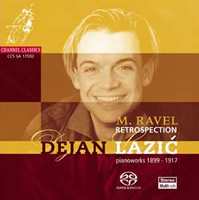 Discs of Ravel's piano music are curiously rare, in whatever media. It seems he is most popular as a peerless orchestrator, but in fact his art was rooted in the piano, and most of his orchestral works originated in his piano pieces. Perhaps another reason for this relative neglect by recording houses of the piano works is that they are very difficult to play, requiring dazzling technique, and they are even more difficult to interpret. Ravel was a very private man, something of a dandy, and a collector of exquisite clocks and cravats. His piano music was often heard in the most fashionable Paris salons, and it was influenced by inputs from various European sources and periods, as well as jazz. After all, Ravel had a Swiss father and a Basque mother; he hated being labeled a "French Impressionist!"
There is even less of Ravel's piano music available in high-definition audio format. I have enjoyed Markus Schermer's "Miroirs" on a 100 min Tacet DVD-A multichannel, coupled with Mussorgsky's original Pictures at an Exhibition in superb sound. Now we have Dejan Lazic's recital from Channel Classics. Its title, Retrospection, refers to a collection of pieces which were influenced by other composers such as Haydn, Chabrier, Couperin and Borodin, by European classical style and so on. Clearly Lazic has a deep appreciation of Ravel's intricate and often febrile piano style, and relishes the wonderful sonorities the composer evokes from the instrument. This is a recording which has been in my machine several times already, and it is impossible not to listen to the whole disc, as the music is well-chosen and pieces placed in a sequence which makes a satisfying session. I have many notes on these excellent performances, but to save space I will just mention a few points.
Right at the start of the Prelude on Track 1 we hear the pianist's languid playing, as he floats a hazy melody over soft jazz-inflected bass chords. Here too we have a recording of a Steinway D that takes my breath away, especially if using a good subwoofer. The dynamic range is fully portrayed, the treble always bright but never harsh, and there is the wonderful Steinway bass growl to enjoy. At a few points on this disc, we can hear a little pedal noise, but that just tells us there is a musician at the instrument. I can believe that the piano is at the end of my (extended!) living room and is utterly real, with just enough of an acoustic bloom from the hall.
If you have never heard the piano original of Ravel's orchestral Pavane for a Dead Princess, you are missing a great deal. Lazic is fully involved in the tragic drama of this title and its Baroque reminiscences, bringing out all the unusual and beguiling textures, recalling those of the harpsichord. He points the way to the climaxes superbly and is tender, never sentimental.
The wonderful Sonatine, a tiny jewel, is Will o' the Wisp in its first movement, full of with and fantasy in the second; Lazic has this work in both his fingers and his head. In the Tombeau de Couperin, sample the Rigaudon for playing which expresses Ravel's manic energy with flying fingers.
Another familiar work from its orchestral incarnation, the Valses Nobles et Sentimentales was inspired by study of Schubert's volumes of waltzes for piano. Judging by Ravel's interpretation of the waltz, I suspect this to be a tongue-in-cheek mocking and satirical view. In addition the French were still somewhat scandalised by the "new" dance, which even in Vienna was regarded as far too erotic. Lazic's opening movement (Track 13) is wonderfully outrageous in its exuberance at the outset, then becomes slinky and seductive in the quieter section. Throughout the waltzes he shows a sly sense of humour and relishes Ravel's wicked sending up of those Viennese and their erotic pass-times.
In summary, this is a recital showing pianism of a high order and with splendid sonics. As an amateur pianist who is deeply envious of Mr Lazic, I welcome it to the SA-CD stable and recommend it to anyone truly wanting to understand Ravel.