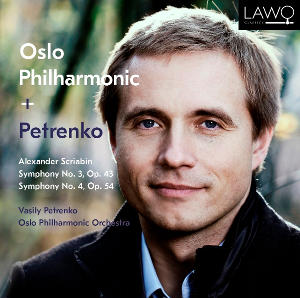 
SCRIABIN RESOUNDS
The Oslo Philharmonic is launching the first release in a series of the complete symphonies of Alexander Scriabin. The orchestra and its Chief Conductor, Vasily Petrenko, offer the captivating coupling of the Russian composer’s Symphony No. 3 ‘Divine Poem’ and Le Poème de l'extase (‘The Poem of Ecstasy’), otherwise known as his Symphony No. 4. Both works were recorded in Oslo in February 2015. Orchestra and conductor will record Scriabin’s Symphony No. 2 in concert during the 2015-16 Season and complete the cycle the following season with the composer’s first and fifth symphonies.

The new album marks the start of a creative partnership between the Oslo Philharmonic and LAWO Classics.

Alexander Scriabin’s deep immersion in esoteric philosophy and related spiritual awakening became integral to his art. The Russian composer’s initial conservative musical language evolved in the early 1900s and opened up to daring harmonic territories. His art was influenced in part by his reading of Helena Blavatsky’s The Secret Doctrine, a syncretic blend of ancient wisdom, occult practices, mysticism, and critical reactions to Darwin and modern ‘materialist’ science.

The Oslo Philharmonic, established in 1919, has achieved high international recognition for its artistry and has, since the 1980s, been in great demand as a touring and recording orchestra under Chief Conductors Mariss Jansons, André Previn, Jukka-Pekka Saraste, and, presently, Vasily Petrenko. With Petrenko the orchestra was invited to perform two concerts at BBC Proms in 2013 and ten Toshiba Grand Concerts in Japan in 2014.

2015 is the centenary of Alexander Scriabin's birth. To mark this, LSO Live with the LSO conducted by Gergiev and LAWO Classic's Vasily Petrenko conducting the Oslo Philharmonic Orchestra have just released multichannel discs of Scriabin's Symphonies 3 and 4, as initiators of a three disc set of the complete symphonies to be issued within the next two years. Earlier this year, Pentatone and Pletnev released Symphonies No. 1 and No. 4 (The Poem of Ecstasy), with the hope from listeners that this too will result in a full cycle. Judging from my comparisons so far, this sudden recorded flowering of the Scriabin symphonies is going to make much difficulty of choice for collectors of the final cycles, but nevertheless should offer new interpretive insights and versions with superb sonics to overtake Muti's 2001 classic red book CD set.

For the first part of Scriabin's musical career, before 1900, he was a celebrated pianist, writing Chopinesque pieces. Just after 1900 came his first two symphonies, classical in their structures. After this, he went further in his interest in philosophical literature, devouring Friedrich Nietzsche's Übermensch theory and works by Verlaine, Mallarmé, Baudelaire, Maeterlinck, Poe, Ibsen and Strindberg, as well as absorbing philosophers Schopenhauer and Kant. Later, when he was in Belgium, he had deep interest in Jean Delville's Theosophist philosophy.

From these, Scriabin developed a hotpot of beliefs of his own, which were expressed musically in his Symphony No. 3 (subtitled "Le Poème divin" (The Divine Poem), which has an ambitious theosophical programme. According to a note presumably written by Scriabin for distribution at the work's1905 Moscow première, it "represents the evolution of the human Spirit, which, freed from the legends and mysteries of the past that it has surmounted and overthrown, passes through pantheism and achieves a joyful and exhilarating affirmation of its liberty and its unity with the Universe."

The four-part Third symphony (completed 1904) consists of a short introduction and three 'movements', all played without pause, which makes it more like a tone-poem. The orchestra is of an extravagant size, with piccolo, 8 each of flutes, oboes and clarinets, cor anglais, bass clarinet, 8 bassoons, contrafagotto, 8 horns, 5 trumpets, 8 trombones, tuba, 2 harps, timpani,16 first violins, 16 second violins, 12 each of violas and cellos and 8 double basses.

An Introduction, taking Petrenko just over 1 min, is an imposing brass-led statement of the main theme of the work, to appear in all the movements. Lawo Classics have the Introduction on a separate track, as Scriabin considered the work to have 4 movements, while LSO Live attach the Introduction to the second movement as one track.

Scriabin titled the following movements, Luttes ("Struggles"), II. Voluptés ("Delights"), III. Jeu divin ("Divine Play"). Petrenko's statement of his passion for Scriabin's works is audibly passed on to the orchestra as they enthusiastically follow his legendary attention to detail, extracting every mood and atmosphere of poetry inherent in the work. Passing from touches of militarism with sinisterly muted trumpets or horns, to amorous violin solos and delicate, languid rustic scenes with bird song (wonderful woodwind solos), Petrenko carefully judges tempi, swelling dynamics and expressive rubato, keeping a firm forward progress. In "Divine play", his bounding, mercurial scherzo has surprisingly light and playful rhythms, yet is charged with complex orchestral colours and textures, revealed by the fine transparency offered by the Lawo recording.

What Scriabin sometimes referred to as his Fourth Symphony was being sketched while he was still working on his Third Symphony. Completed in 1908 and attached to an extension of his previous poem for the Third Symphony, this work was a musical effort to express a new 300 line poem which Scriabin wrote, called "Le Poème de l'extase", extolling his belief that Mankind, aided by Music, could ascend into "conciousness", first as a Spirit, then as "I" (being himself as Messiah). Scriabin wished to have copies of the poem available to his concert audiences, and also wanted it to be printed at the head of the score, the latter forbidden by his publishers.

Scriabin's Symphony 4 or "Poem of Ecstasy" has three very personal sections: (l) portraying his soul in the orgy of love, (2) the realization of a fantastic dream, and (3) the glory of his own art. The poem itself ends with, "I am a moment illuminating eternity....I am affirmation...I am ecstasy.". At the final pages of the score the huge orchestra builds these final glorious three-fold crescendos step by step, with brief moments of quietness in between, but ultimately portraying the ecstasy of Universal freedom. The huge climax, which only lasts for seconds, sports long-held string chords and trilling woodwind underpinned by low bells, deep organ pedals and all the double basses. In the upper parts, the brass soar, and triangles make sounds like the twinkle of stars. This lofty orchestral resolution in a home-coming C major chord follows the rest of the piece being in the composer's own harmonics. The final climax is indeed one of the great moments of Classical Music.

Following their delightful Mozart disc (Mozart: Flute & Harp concerto, Sinfonia Concertante - Buribayev), the Oslo Philharmonic, with its new Chief Conductor Vasily Petrenko, confirms the start of a creative partnership between the the orchestra and LAWO Classics, the Norwegian independent recording company critically acclaimed for its use of DXD (Digital eXtreme Definition) sound. The recording was produced by John Fraser and engineered by Arne Akselberg and Thomas Wolden; both Fraser and Akselberg have a long-standing relationship with the orchestra, developed during Mariss Jansons' tenure as its former Chief Conductor.

Oslo's Concert Hall, completed in 1997, is the Philharmonic's home, but its acoustics have been controversial and have required improvements (this applies also to LSO Live's venue of The Barbican). In 2000, Mariss Jansons, having brought the Oslo Philharmonic Orchestra into the world arena, resigned his position after disputes with the city over the problematic acoustics of the hall. The main problem is the difficulty in balancing the orchestra's output to minimise the main hall's uneven frequency-controlled ambience. Producer and engineers, however, know the Oslo Konserthus very well, the acoustic challenges of the hall and where to place microphones to get the best possible sound. Although it is essential to listen to the present disc at a significantly raised volume level (and that goes for the LSO disc as well), Lawo's sonic stage is very three-dimensional in the 5.0 multichannel mode, yet immediate and thrillingly transparent, so that Scriabin's complex counterpoint of short motifs rather than long melodies are revealed and are also placed accurately in the orchestra's layout. Within its two-speaker handicap, the Stereo mode is also clear, with very natural sound.

It is clear that the Oslo Philharmonic worked hard at these first two "Symphonies" of Scriabin, imbued by Petrenko's expressed enthusiasm for the composer. For the rest of the cycle, orchestra and conductor plan to record Scriabin’s Symphony No.2 in concert during the 2015-16 season and complete the cycle the following season with the composer’s first and fifth symphonies ("Prometheus").

Possibly there may also be a recording and concert of Scriabin’s "Preparation for the Final Mystery", part of a vast work left unfinished at the time of the composer’s death in 1915, and which was to have brought about nothing less than the annihilation of the universe, whence men and women would re-emerge as astral souls, relieved of sexual difference and other bodily limitations. Now that would be very interesting to hear in multichannel DXD!! According to Petrenko, Alexander Nemtin completed the Final Mystery from the surviving sketches after working on them for over 20 years, so performances are possible.

Comparing Le Poème de l'extase from the three Scriabin Symphony cycles so far issued on SACD confirms that they all have considerable merits. Pletnev with the Russian National Orchestra (Scriabin: Symphony No. 1 & The Poem of Ecstasy - Pletnev) is very well-played and directed, with a typically excellent recording from Pentatone. Gergiev and the LSO (Scriabin: Symphonies 3 & 4 - Gergiev) are similarly graphic and dramatic. For my ears, the Oslo wind and brass are most closely knitted into Scriabin's orchestral tapestry, and the Lawo recording is focussed beyond either or the other two, and its deep bass with clear attacks is far better than the comparatively muffled Barbican bass. The Oslo brass also sound most brilliant, with many upper register harmonics not usually discernible. Petrenko's wonderful heaven-storming sound excited me and was a real factor in catching and keeping my attention to the maverick Scriabin's dreams more than the other two, so I certainly recommend it heartily.

The disc comes in the usual 2 gate plastic Digipak, with the removable booklet graced by colour photos of contemporary art. As well as thorough biographies, Christian Kjelstrup has provided an essay entitled "Scriabin's resolution", presented in Norwegian and English adjacent columns. This is one of the finest and comprehensive introductions to a programme that I have come across, and I strongly encourage buyers to read it before listening.