High, Low or In Between - Henryson / Henryson 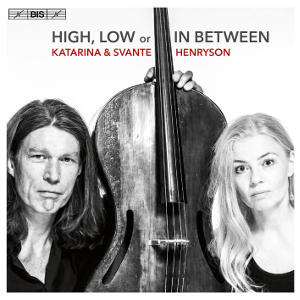 High, Low or In Between


As individual musicians, Katarina and Svante Henryson have carved out quite extraordinary careers: Katarina touring internationally as a member of the highly successful Swedish vocal ensemble The Real Group, and Svante appearing in the most varied collaborations – on the cello, double bass and electric bass, and as performer, arranger and composer – with musicians as diverse as Elvis Costello, Anne Sofie von Otter, Chico Freeman and Martin Fröst. The duo they form together, on the other hand, has been a more private affair, performing for their relatives at christenings and weddings, at birthdays and funerals. One reason for this has been the fact that they don’t only share a surname, but also two children, and when one of them toured professionally the other would have to be at home. Their duo repertoire has grown from zero to CD at the same pace as their children – and now the time has come to ‘go public’.

Representing their own broad musical tastes, the repertoire is as varied as it gets: it is truly ‘High, Low or In Between’, with pop songs by Elton John and George Harrison rubbing shoulders with Prince’s funk hit Kiss, Bill Evans’s jazz classic Waltz for Debby and Tom Jobim’s bossa nova Chega de Saudade. These last two Katarina performs in the versions made immortal by the Swedish jazz singer Monica Zetterlund, while a third song to a Swedish text, Det växer från Edens tider, also displays its Swedish origins proudly through its folk-like idiom. A handful of tracks consist of original material by the performers themselves – Eyes of a Child they wrote together after the birth of their son – including three cello improvisations and Svante’s instrumental piece Green. In these, Svante’s cello – and his very special treatment of it – steals the spotlight, but in fact it plays such a major role throughout the programme that it becomes a third, equal partner of the duo!

I am surprised no one has reviewed or commented on this release. While not “high-brow” classical or jazz, this is enjoyable listening with accomplished married couple Katarina (vocals) and Svante (Cello & Cello Arrangements) Henryson providing a relaxed mix of jazz and contemporary interpretations as well as original cello pieces (played on a unique sounding non traditional Chanot 1818 cello). Like many of the exceptional and wonderful BIS SACD recordings I encourage everyone to purchase and enjoy this disc and show there is still a viable market for such great labels and high-res physical releases.